Bikie laws, Sonny Bill Williams and politicians forced to repay expense claims were the hot topics this week. And Tony Abbott came out on top.

Prime Minister Tony Abbott increases his already massive lead on the Political Index this week — thanks mainly to coverage surrounding the repayment of travel expenses he claimed after attending the wedding of Liberal MP Sophie Mirabella. The PM repaid $1094 for a 2006 trip to Wangaratta for the wedding of the former opposition frontbencher — who lost her seat of Indi in a close contest with independant Cathy McGowan — after the Department of Finance told him it could not guarantee he was entitled to it.

Indeed, expenses have dominated the headlines since Attorney-General George Brandis and Federal Agriculture Minister Barnaby Joyce agreed to repay expenses for the wedding of Sydney radio broadcaster Michael Smith. Even squeaky clean Communications Minister Malcolm Turnbull was drawn on the subject, saying “if there is any doubt, don’t make a claim”.

That said, the bulk of coverage for Turnbull centered on new NBN executive chairman Ziggy Switkowski’s report on the project which is due by December 2. Turnbull spent much of the week suggesting country towns are ideal for his fibre-to-the-node architecture as they typically have a Telstra exchange connected to fibre, which makes it easy to install high speed broadband and would be faster than the Labor Party’s wireless option.

Meanwhile, Senator Nick Xenophon was another mover — up 15 points on table — as he rejected claims by former senate candidate Dianah Mieglich of a “verbal undertaking” to preference her above the major parties. And in NSW state politics, Premier Barry O’Farrell gained nine points as he wouldn’t reveal if he’d follow Queensland Premier Campbell Newman’s lead on stronger anti-bikie laws. 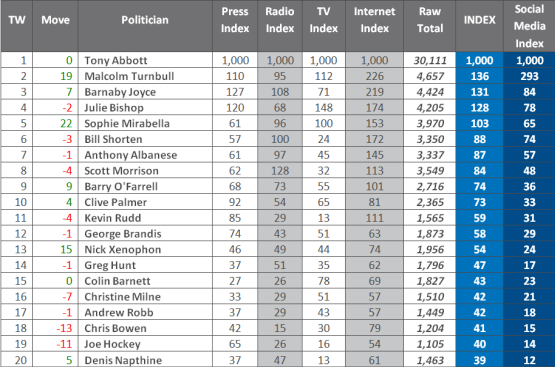 The ALP’s ongoing conversation about itself continues to get a spike from talkback radio.

Abbott is streaks ahead in the Twittersphere, but it is all about the Labor leadership from there.

Sonny Bill ‘Money Bill’ Williams helped the Sydney Roosters to an NRL flag and now must decide whether to stick with league or join the New Zealand Super Rugby side the Chiefs — and potentially play for NZ in a rugby world cup.

Leader of the pack for all the wrong reasons —- another passing nuisance Tony ?????