The Washington Post says "something's not quite right" with the US's financial situation. Understatement of the year?

Filling that news vacuum. In the absence of being fed something more interesting, the stories of politicians behaving badly with their travel allowances continue to dominate the political coverage in the media. It is keeping the journalists happy but the “news” seems to be producing yawns among the audience. The stories did not rate a mention on the most read lists of the News and Fairfax websites this morning.

The chances of a US default. I can’t find enough proper markets from which to develop our own Crikey Indicator but the Washington Post is compiling what it calls a Default Dashboard to give a guide to the likelihood of the United States defaulting on its debts. 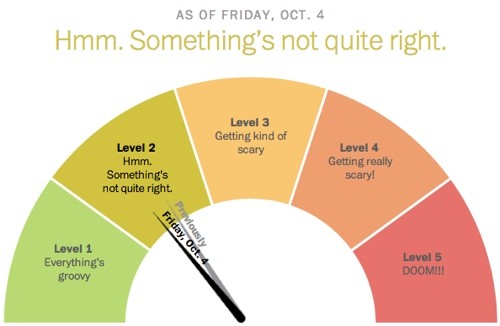 The dashboard is based on some key financial market, survey and betting odds measures that capture what informed investors (and gamblers!) think about the prospect of a U.S. debt default. An updated version should be on the paper’s site later today with a movement closer to “getting kind of scary” likely.

The US in the back row. Barack Obama’s move to pivot his nation’s foreign policy to Asia is suffering from his absence at the APEC meeting in Bali. Here’s the official photograph of the attendees with US Secretary of State John Kerry relegated to he right rear.

On the political fringes, feelings of superiority abound. A just published study suggests that while people with moderate attitudes tend to be more evenhanded, those on the extreme ends of the political spectrum seem especially convinced that their viewpoints are the only “correct” ones. Feeling Superior Is a Bipartisan Issue: Extremity (Not Direction) of Political Views Predicts Perceived Belief Superiority appears behind a paywall in the current issue of the journal Psychological Science, and argues that ideologues on both ends of the political spectrum are equally likely to believe their opinions are superior to others, but their feelings of superiority emerge for distinct political issues.

From the authors’ press statement on their findings:

Psychology researcher Kaitlin Toner, a postdoctoral fellow at Vanderbilt University, and her colleagues believe these new findings have something important to say about the current political climate in the United States.

“Given the stalemate in Washington, understanding why people become so entrenched in their views — even when there is not an objectively correct answer — is more important than ever,” says Toner, who conducted the research as a doctoral student at Duke University.

Toner and her colleagues at Duke were struck by the blatant biases they saw in media coverage of the 2012 presidential election:

“Pundits, politicians, and even commentators on online news articles seemed so confident that their own views were better than everyone else’s,” says Toner. “Logic would argue that they couldn’t all be right 100% of the time, so we wondered what was making them so sure of the superiority of their opinions.”

Participants then indicated how correct their opinions were relative to other people’s beliefs on each issue, ranging from “no more correct than other viewpoints” to “totally correct — mine is the only correct view.”

Overall, participants who were more conservative politically showed higher levels of dogmatism, a personality trait that describes people who are inflexible in their ideological beliefs. This finding replicates prior research and supports what scientists call the “rigidity-of-the-right” hypothesis.

But the data on belief superiority revealed a more nuanced picture.

Conservatives and liberals reported that their view was the only correct view on the same number of issues, though the issues they felt most superior about differed between the two groups. Conservatives felt most superior about voter ID laws, tax rates, and affirmative action, whereas liberals were most convinced of the superiority of their views on government welfare programs, the use of torture on terrorists, and the role of religion in policymaking.

“There’s no logical reason why people who hold moderate, middle-of-the-road attitudes wouldn’t think that their attitudes are superior. But they don’t tend to believe that; it’s the people with extreme attitudes who are disproportionately convinced that they are right.”

One for the fans. The BBC is expected to announce later today that it will make some of the earliest episodes of sci-fi series Dr Who available for its legion of followers to purchase. The Guardian reports the good news that the corporation has recovered early episodes that were thought to have been lost or damaged. 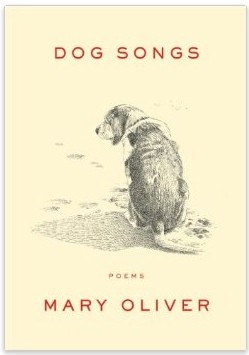