The New York Times has hired former Fairfax journalist Julia Baird. That and other media tidbits.

NYT gets into Baird with Julia. Former Sydney Morning Herald journalist Julia Baird has signed on as a columnist with the International New York Times. The paper is an updated version of the International Herald Tribune, a favourite of airport dwellers and English-speaking expats across the world. The INYT will launch on October 15 with a raft of new international columnists. Baird, who writes regularly for the SMH and hosts ABC’s The Drum, is a former deputy editor at Newsweek.

Exclusive watch: Oz on asylums. The Australian has long stretched the use of the word “exclusive” beyond credulity — most recently by slapping the red tag on opinion articles by Greg Sheridan. The Weekend Oz took it a step further by slapping an “exclusive” tag on a story regurgitating an asylum seeker scoop published in trade journal Medical Observer. On planet Oz, adding a few new quotes to someone else’s st0ry now counts as an exclusive …

So how many asylum seekers are seeking cosmetic treatments? Rada Rouse, who wrote the original Medical Observer story, told Crikey she believed only one person had asked GP Ling Yoong for implants. She said she originally reported Dr Yoong’s story because “we didn’t think the doctor would be making it up”. But Rouse could not provide any data or responses from asylum seekers or other staff to support Yoong’s claims.

Video of the day. The newsroom of the future? Comically large tablet desks — “We call these BATs,” anchor Shepard Smith notes, “Big Area Touchscreens” — and some sort of remote control to drive a 38-foot video wall — “For instance, I can take this lady who’s been evacuating from a hurricane zone and move it over here” —  are all part of the shiny new Fox News Deck  … 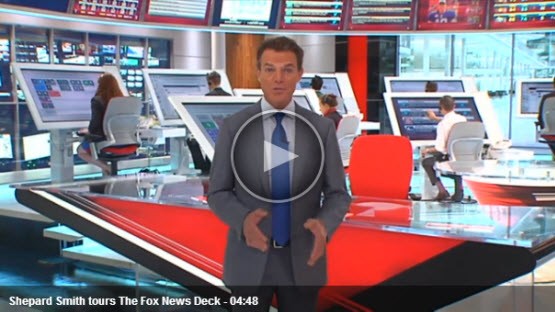 Front page of the day. Melbourne’s Herald Sun has done some digging and found that one of the protesters against the controversial East West tunnel has also appeared at other protests. These include APEC, the G20 and a rally at the Video Dogs store in Carlton over claims staff were being paid in DVDs … 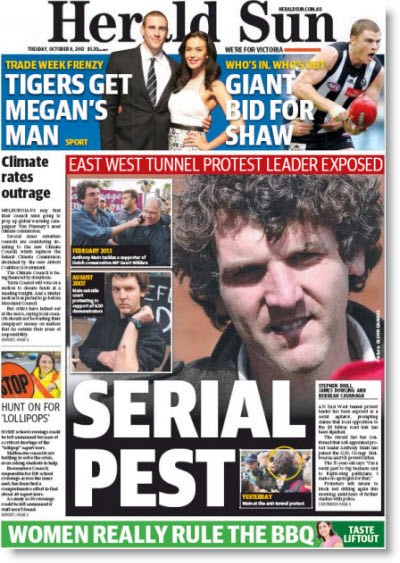 But who else would pay Sheridan for his opinions?
Last night, Q&A – anyone who disagreed with his opinion was “wrong”?

The Oz didn’t pirate that story did it?

And only 4 words worth reading from that front page “The Herald Sun – Serial Pest”?

(There’s no The to start with)

So I assume Fox isn’t going to do anything new with its “journalism”?