Crikey Clarifier: the cost of entitlement for roaming MPs

Parliamentary expenses are in the news. So what exactly are pollies allowed to claim? And how much is it costing us? asks Crikey intern Rose Iser.

New pollie perks are exposed every day. So what are MPs actually entitled to, how do they record their expenses, and just how much is it all costing us? Crikey explains …

What are parliamentary entitlements?

The parliamentary entitlements handbooks actually make it pretty clear: MPs have office, travel and accommodation entitlements set out in great detail. Limits on costs and types of payments are all articulated for senators and MPs.

MPs are entitled to travels costs anywhere in Australia for “parliamentary, electorate or official business”. Not pleasure. Not something an MP is attending in a personal capacity. The Department of Finance has made the information simple, attractive and clear. For example:

How do we know who spends what?

Every six months, MPs and senators are required to submit their claims to the Department of Finance. Expenditure for January-June 2013 will be published later in the year.

What can we learn about MPs from their entitlement reports?

It is now common knowledge that the reports reveal the reading habits of MPs: who buys books (George Brandis); who buys only The Australian (Stephen Jones).

On September 16, 2012 Senator Nick Xenophon spent $1257 on a flight that was “not flown” and a “non-refundable fare”. Xenophon was concerned about the figure, telling Crikey this morning that “something was wrong here — the flight should have been cancelled as a matter of course”. He is seeking clarification from the travel agent about why the fare was charged to the taxpayer.

Gary Gray’s report indicates he spent $488 on a Comcar in Perth on September 27, 2012 and appears to have paid back $1143 for a plane fare to Uluru on November 14, 2012. Gray was previously the special minister of state responsible for overseeing members’ entitlements.

Then there are the higher-end trends exposed by the members’ reports. Four MPs — Tony Abbott, Kevin Rudd, Tanya Plibersek and Adam Bandt — spent more than $430,000 in 2012 on total office costs. That’s almost double the average of $240,000 spent by members of Parliament including senators. The lowest spenders on office costs over the period included now retired Bendigo MP Steve Gibbons and Labor MP Rob Mitchell, who narrowly held his Victorian seat of McEwen.

Costs are accrued over the financial year and cover leases, equipment and maintenance. MPs are not allowed to spend more than about $170,000 (depending on the size of their electorate) on office administration. Senators have a much lower cap on postage and printing costs.

High-flying MPs: how much are they on the road?

The reports are so detailed that it is also possible to map the movements of an MP over the period. Flight, accommodation and Comcar details can be extracted and pieced together to create a diary of a politician.

The member for Corio Richard Marles held the position of parliamentary secretary for foreign affairs. A diary of his movements from July to December 2012 shows that he was away from his electorate (and family) for a total of 16 weeks — or more than three out of six months … 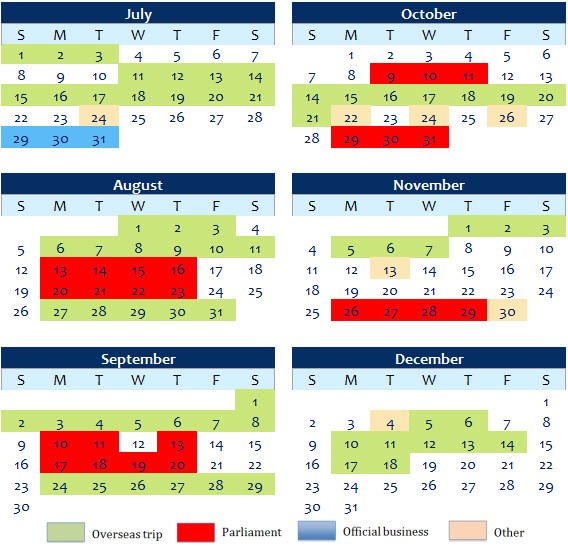 The reports also disclose the cost of MP’s fares for their overseas travel — and the flights taken don’t come cheap. Anthony Albanese’s fares to Indonesia for a three-day series of high-level meetings in September 2012 were $22,581.62. Senator Kim Carr’s fortnight of travels abroad cost $64,000 — including $45,510 worth of fares …

So what’s it all costing us?

Whether the entitlements are appropriate, over-generous or regularly exploited are not trivial arguments: according to the Department of Finance, taxpayers forked out approximately $54.5 million in parliamentary expenses from June to December last year. That suggests an annual cost of  over $100 million a year for 234 MPs.

One Nation’s ‘web-based computer programme’ will fix everything wrong with govt, you guys

So Plibersek and Bandt spend more on offices because they’re both inner city seats? and Abbott and Rudd were party leaders?

It should not be that hard for MPs and all their staff to comply, but it clearly is.
They expect individuals to never make a mistake when filing tax returns, and penalise us if we do.
They expect people running small business to accurately claim expenses, complete BAS, Super etc, deal with the bureaucracy required by multiple Federal, State and Local Government departments, as well as other industry specific regulatory bodies, all without error and at timetable determined by the bureaucrats and deal with reviews that they decide are needed whenever they need them or change their systems, and penalise us if we make a mistake.
Yet they or their staff can stuff up, and they can cough up a decade later without penalty or the payment of interest.
This “Us and Them” system clearly works for them, as the legislators and the beneficiaries.
But it ain’t reasonable.
MPs arguably are well paid. They arguably receive generous entitlements that they don’t need to justify.
If they argue that they deserve even more for travel and perks, as I expect they will, it has to be capped.
$50k for a backbencher, $100k for a Minister, $150k for the Opposition Leader, $200k for a PM. No more.
Future pay rises to be determined by committee comprising a representative selection from the community, including unemployed, pensioners, and stay at home carers as well as workers.
Enough is enough.

when i was young many decades ago i was an ardent supporter of increased salaries for politicians. like many people i believed it was necessary and would lead to better representation. now i am older and more cynical, i think they make enough dosh and should stick to the parameters of their pay packets and stop,stop,stop trying to rort the system.

What MP’s waste is nothing compared to our unelected bureacrats in Executive agencies—al those bribes paid by RBA, the billion dollar bill a year to large law firms which is unjustified and the exhobirant spending on HR… And there are still question marks around the level of corruption in Government