A high-ranking secretary at Victoria's Department of Education has been mentioned in a local government scandal involving the mismanagement of child sexual assault allegations.

A former British bureaucrat who has been linked to a scandal in which a local council allegedly failed to protect children from sexual abuse was appointed as a high-ranking executive at the Victorian Department of Education, despite widespread reports of serious failures under her watch.

Dr Sonia Sharp was hired as a department deputy secretary in March 2012 to head up its Early Childhood and School Education Group, just one rung below secretary Richard Bolt.

Sharp served at Rotherham Council as strategic director of children and young children’s services, in the northern UK county of South Yorkshire, from 2005 until mid 2008, before moving to a similar role at neighbouring Sheffield council. In late 2010 a gang of five Rotherham men were convicted and jailed for “grooming” and raping girls aged between 12 and 16 over several years. Last September, just six months after Sharp’s move to Melbourne, the UK Times splashed with claims that systematic sexual abuse of minors in South Yorkshire was much more widespread than first thought.

Her new position some 17,000 kilometres from her former 140,000-pound gig has led to calls in the UK press — as yet unreported in Australia — for Sharp to give evidence into two separate Rotherham inquiries being conducted by British authorities. British political chroniclers Private Eye reported last month  that investigators may want to head Down Under to interview Sharp over the scandal. It alleged that council social workers were aware of “grooming” among groups of men of Pakistani origin for years before the convictions: 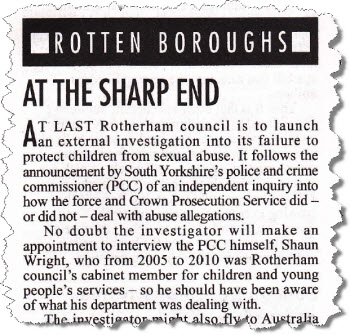 “Social workers had been aware for years that groups of Pakistani-origin men were grooming girls.They knew for six years that a teenage mother, 17-year-old Laura Wilson, murdered in 2010 for bringing ‘shame’ on the families of two men who had used her for sex, was at clear risk from gangs. It was revealed at the trial of her killer that social services had received information about adults suspected of targeting her from the age of 11. So from 2004 to 2010 it was acknowledged that here was a youngster at risk.”

Rotherham Council leader Roger Stone announced last month that an independent inquiry into the issue of child sexual exploitation at the council from 1997 to 2009 would take place and “apologised unreservedly” for services that “simply weren’t good enough”. The South Yorkshire police and crime commissioner is also conducting an inquiry into police failures. South Yorkshire police had been told to re-examine all cases related to child exploitation in the wake of the Operation Yewtree investigations prompted by the Jimmy Savile revelations.

In June, a Home Affairs Select Committee report criticised several South Yorkshire councils, including Rotherham, for being “inexcusably slow” to recognise and act on the sexual abuse of children by the men. The UK Telegraph reported in August that four victims were planning to sue Rotherham Council for failing to protect them from predators.

In a statement provided to Crikey this morning, Dr Sharp says she has not yet been contacted by any authority but that she will “co-operate fully, as I always have, should contact be made”. She supports the council’s call for an inquiry and agrees it’s “important issues are identified and that necessary action is taken”:

“During my period at Rotherham Council, I led a team that worked to address sexual abuse as one of our top priorities.

“Addressing sexual abuse was taken extremely seriously by all concerned and we were committed to taking action to prevent this awful and damaging blight on children’s lives. The nature of the work was highly sensitive and complex, demanding intense cooperation with police over a sustained period that ultimately led to convictions.

“When working in child protection, you always strive to safeguard the wellbeing of all children, notwithstanding the reality that there is always the possibility that some things may be missed, and that there is a small number of people in the community intent on harming children.”

A Department of Education spokesperson did not specifically respond to Crikey‘s questions but issued the following statement:

“Safeguarding the wellbeing of children is the absolute top priority for the Department, including for Dr Sonia Sharp.

“Dr Sharp has dedicated her career to protecting the wellbeing of children and young people and ensuring they have the best chance to lead happy, engaged and productive lives.

“The Department appointed Dr Sonia Sharp to her role following an extensive international search and rigorous recruitment process. Dr Sharp’s background is in teaching, research and educational psychology. She holds a Master degree and Doctorate in Education Psychology and the National Professional Qualification for Head Teachers, has published a number of books and articles and is known internationally for her work on tackling bullying in schools.

“Since arriving in Australia, Dr Sharp continues to be a highly regarded and respected leader in education and early childhood development.”