The government's plan to stay (mostly) out of the media has backfired, with journos forced to look into the archives for stories.

When silence is not the best policy. When a government fails to feed the media, the media has to feed itself. Hence stories like this morning’s quoting former Liberal Opposition Leader John Hewson on the ethics of travel allowances for attending a wedding. Far from keeping politics out of the news, the new government’s policy to limit public utterances had resulted in a vacuum that journalists filled by beating up old stories like the Fairfax papers did with travel allowances for MPs. 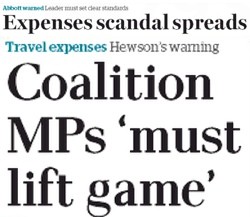 An encouraging sign? Perhaps it is not just talk. Perhaps Prime Minister Tony Abbott’s talks in Jakarta will lead to Indonesia doing more to try and halt the people-smuggling trade. Yesterday, 22 undocumented migrants who survived a shipwreck in the waters off Agrabinta in Cianjur regency, West Java, were deported. The Jakarta Post reports this morning: 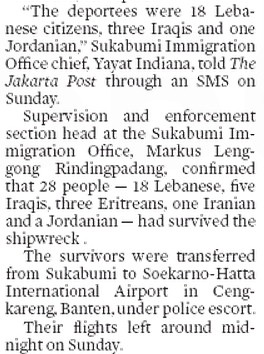 Shrinking middle ground. The Washington Post on Sunday ran a lengthy piece trying to explain why the American political system has reached such a “partisan divide”. It reached the pessimistic conclusion that gridlock has become inevitable as more of the country has become strongly partisan Republican or Democrat with a sharp decline in areas where voters alternate between the two parties.

A novel election. Just over a week to go before the winner of the Mann Booker prize for novels is announced and as yet no clear-cut favourite has emerged. The Crikey Booker Election Indicator shows:

“If you only read the books that everyone else is reading, you can only think what everyone else is thinking.”
― From Norwegian Wood by Japanese author Haruki Murakami who the bookmakers have made favourite to win this year’s Nobel Prize for literature.

So Indonesia did Catch 22 “undocumented migrants”.

IMHO one of the causes of the US polarisation is the winner-take-all system used in most state electoral college contests. It means that the losing side in that state gets NO representation in the college.

The link for the article about the German elections is broken, but it presumably should be http://www.spiegel.de/international/germany/experts-5-percent-parliamentary-hurdle-in-germany-should-be-lowered-a-925817.html