‘I’ve lost all hope that I can have a life here’: Tamils still fear the future

Four years after the civil war ended, many Tamils have no expectation of peace or safety in Sri Lanka’s Northern Province, writes Emily Howie at Inside Story. This is what drives boat migration. 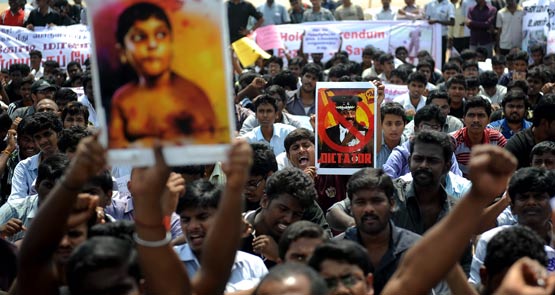 Brami has rushed from work to meet me. She arrives on her bike and tells me she must be home soon to care for her three children. We sit down to talk in a small office in a village in Sri Lanka’s Northern Province, beneath the unforgiving glare of a bare light bulb. Very soon it is dark outside.

Brami, who is 36 but looks much younger, is quiet and well-dressed, and smiles frequently as we talk. Although she seems a little nervous, she wants to tell me about her experiences as a Sri Lankan Tamil, a widowed mother of three children, and a survivor of Sri Lanka’s three-decade civil war. She is also one of nearly 10,000 Sri Lankans who paid people smugglers to take them to Australia last year.

Sri Lankans have never before come to Australia by boat in such large numbers. Since January 2012, 8000 of them — including more than 1700 so far this year — have journeyed to Australia without passing through an official Sri Lankan port. In 2012, a record year for boat arrivals, Sri Lankans made up the biggest single national group for the first time. Even during 2009, at the end of Sri Lanka’s civil war, the numbers were significantly lower.

Both the Australian and Sri Lankan governments say that the surge is fuelled by “economic migrants”, but the evidence from migrants themselves reveals complex motivations, with economic concerns linked inextricably to political problems, persecution, and other forms of discrimination and injustice. These concerns are shared outside Sri Lanka: after a visit to Sri Lanka in August this year, the United Nations High Commissioner for Human Rights highlighted the impunity enjoyed by government forces, the failure of the rule of law and the fact that president Mahinda Rajapaksa’s government was “heading in an increasingly authoritarian direction … despite the opportunity provided by the end of the war to construct a new vibrant, all-embracing state.”

Over the past three years, Sri Lankan authorities claim to have caught around 4500 people trying to leave by boat. But reports suggest that parts of the Sri Lankan government are complicit in people-smuggling operations. Australia relies heavily on the Sri Lankan navy to combat people smuggling, but what if our partner is part of the problem in more ways than one?

Six months before I met her, Brami paid a people smuggler to take her and her three children to Australia. Travelling with a group of people from her village, they were caught by Sri Lankan authorities and arrested.

When I asked Brami why she tried to leave, she told me that she was concerned for her children’s future and wanted to make sure they received a good education. She was also fearful of being home alone without her husband, who she later told me had been taken away five years earlier and not seen again. She described her concerns as “commonplace”.

But as our conversation continued, Brami disclosed that officers from the Sri Lankan Police Criminal Investigation Department, or CID, have visited every month since her husband disappeared. These men would “stay a short time if my children were there but longer if they weren’t”, she told me. “They would call me and ask to go somewhere, that kind of thing.” CID has her phone number and she gets “midnight calls” where they “talk rubbish.” “They know I’m alone so they are trying to get a benefit.”

Although Brami characterised herself as an economic migrant with the same everyday fears as many women in female-headed households, her words suggested that she also feared physical, and probably sexual, harm at the hands of police. It is difficult to imagine that her story is unique; she is one of an estimated 40,000 women living in female-headed households in the country’s former conflict zones. These are among the most highly militarised regions in the world, with an estimated one soldier for every five civilians. The UN High Commissioner recently highlighted her concern that women and girls in female-headed households are vulnerable to sexual harassment and abuse, including at the hands of military personnel.

Kedish, a young Tamil man in the Vanni area of Sri Lanka’s Northern Province, also tried and failed to go to Australia to improve the financial situation of his family. His family was displaced frequently during the final phase of the war and then held in a refugee camp for nearly a year. Before the war, they had a paddy field, a house and vehicles, but when they returned they found just a few bushes and coconut trees; everything else had been destroyed in aerial attacks. “I want to go abroad to earn money for my family”, Kedish told me. “Earlier we were wealthy people and now I feel like poor people so I want to leave.”

Kedish now lives in a militarised area of the Northern Province under a tarpaulin, in fear of war returning. With large numbers of military officers in the area, he also fears for his sisters’ safety. “There is a narrow road to home and the military are on both sides. They tease women as they pass. In the evening the girls do not go out,” he said.

Not surprisingly, former cadres of the Liberation Tigers of Tamil Eelam, or LTTE, are also among the boat migrants. The Sri Lankan government says it has now “rehabilitated” 11,770 ex-cadres who surrendered to security forces at the end of the Sri Lankan civil war in 2009. In Sri Lanka’s case, rehabilitation involves detention without judicial oversight or legal representation, and monitoring by local security forces when ex-cadres return to their villages.

Some former combatants feel threatened and harassed by this monitoring, and by visits to their homes by security forces or requests to go to local military bases for questioning. They also report having difficulty getting loans or employment because of prejudice or fear in the community. The Jaffna High Court acknowledged earlier this year that private firms are reluctant to employ rehabilitated former LTTE cadres and that banks are reluctant to provide them loans. This discrimination leads to economic disadvantage, the court said, and causes people to leave the country illegally in search of a better future.

Should the Biloela family be allowed to stay in Australia? Readers have their say

The world’s a tough place and life wasn’t meant to be easy. Get used to it!

former combatants feel threatened and harassed by this monitoring, and by visits to their homes by security forces or requests to go to local military bases for questioning.

Should have thought about that before they chose to take up arms and become combatants for a terror outfit.

Oh yes the Sri Lankan government and the Sinhalese armed forces that had been discriminating the Tamil population in the island and had committed genocide and large scale ethnic cleansing are not war criminals or terrorists, only the Tamils who fought against this are.

Another British stuff up from their colonial past. Importing Tamils to Ceylon must have been one of the stupidest moves by the Brits since their Fiji and Malaysia trans migration programmes of Indians to do the hard work. The UK government needs to take responsibility for their past mistakes.