And you thought the United States government was going through some kind of shutdown. Well get a grip on yourself and start watching Murdoch's Fox News.

When a shutdown becomes a slimdown. And you thought the United States government was going through some kind of shutdown. Well get a grip on yourself and start watching Murdoch’s Fox News. There’s no shutdown. It’s a slimdown. Shutdown is just the Obama administration’s preferred term and at Fox they’re having none of it. From the website last night:

Which followed a day when all the reports from newsagency AP had the “shutdown” word replaced with “slimdown’.

Albo continues to lead. No change this week in the probability assessments of the Labor leadership contest. 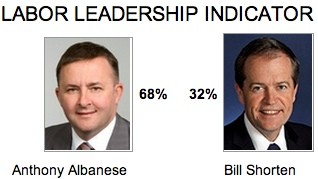 Gone but not forgotten. Giving him one for old time’s sake. The Sydney Terror this morning: 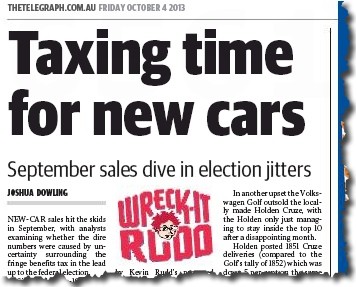 Silencing Barnaby. Let’s call it broken promise number one. The Tony Abbott commitment to orderly decision making by cabinet did not last beyond the first need for political expediency. Ignoring the concerns of Agriculture Minister Barnaby Joyce about Indonesian purchase of Northern Territory cattle stations was a small concern compared with the need for a little appeasement towards an Indonesian government capable of making mischief over boat people. And the good Senator Barnaby knows that once Abbott’s pre-emptive strike was made he had no choice but to pretend he agreed with it. But rest assured that behind the supportive words of yesterday there lurks resentment. The time for a get-square will surely come.

Gees, we know about Abbott, but if you can’t trust Jethro’s word, who can you Trussed?

Richard you do know that the Daily Mash is a spoof site (link about tattoos) ?