Markets are shaky as the US government shutdown drags on. 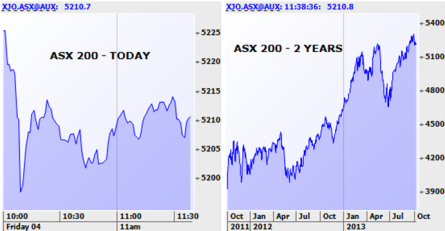 The market is down 24 points. Dow Jones closed down 130 — Heavy falls on Wall Street overnight as creeping worries about a political stalemate triggering the first default in US history starts to unnerve investors.

US Treasury Department has warned that a federal default could lead to a recession as bad as the GFC.

US Stocks — Boeing Co, Chevron Corp and DuPont fell at least 1.4%. Eli Lilly Co fell 3.4%. United Technologies Corp fell 1% after saying the shutdown will lead to as many as 5,000 temporary layoffs.

Chinese Non-Manufacturing PMI rose to 55.4 in September from 53.9 in August.

The US dollar fell against major currencies.

European markets were mixed on Thursday. Economic data was positive with EU retail sales up 0.7%.

Base metals were mostly down. Nickel falling the most.

The iron ore price was unchanged at US$131.40 a tonne with Chinese markets still on holidays.