Coal India, under a haze of scrutiny, eyes Australian miners

A company called Coal India Limited is eyeing off $4 billion of assets in Australia. So who are they, and should we be worried about the purchase? Journalist Karl Mathiesen investigates. Coal India Limited is preparing to buy assets in Australia to secure India’s coal-powered future, as it faces questions about its corporate character. Meanwhile the world’s big money banks are cheerleading for the world’s largest producer of coal.

The Institute for Energy Economics and Financial Analysis finding that CIL over-stated its coal reserves to investors is just one of a litany of question marks over the company’s reputation. The Indian government-controlled company has been alleged to have ignored laws banning child labour in India, steamrolled environmental regulation and violated the constitutional rights of indigenous Indian tribes by evicting them from their land.

The IEEFA report, sponsored by Greenpeace, said that during a share float in 2010 the company used an outmoded system to exaggerate its reserves by 16%. It said the company had been overvalued by US$4.25 billion. CIL currently produces 80% of India’s coal; the IEEFA said CIL’s reserves would run out by 2030.

Greenpeace India has filed a complaint with the Indian stock exchange regulator, charging the company with deliberately concealing the true size of its reserves to drive up its share price. CIL Chairman and Managing Director S Narsing Rao denied the accusations on Indian television this week, saying the company’s figures were in line with the standard required by Indian law.

Now the Indian giant is considering buying $4 billion worth of assets in Australia. The new acquisitions would help secure coal supply for a planned expansion by CIL as India vies with China to become the heaviest user of coal power on Earth. According to the World Resources Institute, India has 455 new coal power plants in various stages of development across the country. An estimated 400 million people in India live without access to electricity.

The Guardian reported this week Australia is about to significantly increase its de facto carbon emissions on the back of an explosion of coal sales to India.

Australian thermal coal prices dropped by nearly 19% between February and August this year. The low prices prompted CIL to investigate buying two US$2 billion stakes in two Australian coal companies. CIL’s board is considering the purchase.

The sale will have to be approved by Australia’s Foreign Investment Review Board. Among its conditions it states: “Companies operating in Australia and Australian companies operating overseas are expected to act in accordance with the principles set out in the OECD Guidelines.” The guidelines include the imperative to: “Contribute to the effective abolition of child labour, and take immediate and effective measures to secure the prohibition and elimination of the worst forms of child labour as a matter of urgency.”

A 2010 report by HAQ Centre for Child Rights found child labourers in mines operated by CIL subsidiaries. Reports in The Guardian in 2010, The New York Times in February this year and America’s ABC as recently as June suggest that child labour is still a widespread reality in India’s domestic coal-mining industry.

The IEEFA report is part of an orchestrated campaign by Greenpeace aimed at exposing poor practice and governance within India’s coal industry. Aside from uncovering CIL’s habitual trespasses into human rights violation and environmental rule-bending, Greenpeace has an agenda to undermine the image of the carbon-emitting coal industry at large and embarrass potential investors.

The Indian government, which owns 90% of CIL, has engaged Goldman Sachs, Deutsche Bank, Bank of America and Credit Suisse to help it sell off another 5% of its holding. These big banks, along with three Indian banks, are commissioned to attract investment in the business.

A spokesman for Greenpeace said: “The big banks whose reputations are already tarnished following the 2008 banking crisis should be wary of getting into bed with Coal India, which is hiding the true nature of its reserves. This might be another opportunity for these four banks to turn a quick profit, but it is a recipe for disaster for potential investors in Coal India.”

An Australian investment sector commentator said the revelations in the IEEFA report would surprise few in the market and that dealings with Indian companies usually carry a kind of corruption caveat: “Sixteen per cent is about on par. It’s poor, but it’s a given. You assume that you are getting ripped off. The whole Indian share market has been marked down because of poor corporate governance. Deutsche would be pretty hard pressed to sell shares in Coal India unless they are at a pretty big discount.”

Can we bank on business to take the environmental lead? 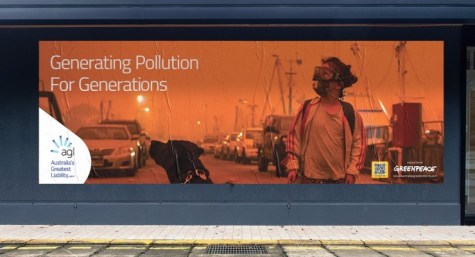 Logo no go: legal action against Greenpeace puts the parody defence to the test

It should be noted sections of the Indian community are opposed to acquisition of Australian coal resources. From a World point of view the only thing Australia must do is phase out coal production as recommended by the former Climate Commission. This point of view, extended to the World, is echoed by those concerned about the future of the planet. It logically follows the results reported in the recent IPCC Report. Such action by the Australian Government would be REAL DIRECT ACTION. Do it Mr Tony Abbott, Prime Minister for all Australians

Just ask the Indian Government for its written opinion on the matter. That will take 10 years. Problem solved.