RBA who's who ... story behind troubled trucking company ... found: one missing ex-environment minister ...

RBA scandal who’s who. Graeme Thompson, the one-time chair of two firms associated with allegations the RBA behaved corruptly, has found himself being chased by gun reporter Nick McKenzie for Four Corners. Thompson is a former RBA deputy governor and was chair of Note Printing Australia and fellow RBA subsidiary Securency for the time that the allegations relate to. The show, which aired on Monday night, contained allegations from a whistleblower that Thompson ordered a payment to a middleman overseas, in relation to the selling of the RBA’s polymer banknotes. Here’s a snippet from Four Corners:

A reader asked if this was the same Graeme Thompson who was at the Australian Prudential Regulatory Authority at one time. The answer is yes, according to Fairfax.

During his time with APRA, Thompson faced questions over the collapse of insurer HIH in 2001. Here he is being interviewed by The 7.30 Report (as it was then called):

“… business and economics editor Alan Kohler looks back at some of those early clues to what is shaping as the biggest disaster in Australian corporate history.

GRAEME THOMPSON, AUSTRALIAN PRUDENTIAL REGULATORY AUTHORITY: We clearly missed something. Exactly why, whether we were misled, whether the company’s accounting systems were just so deficient that the information that they were producing was totally flawed. We just don’t have the answer to those questions yet …”

You can read more about APRA and HIH here.

The story behind Cootes. Who owns Cootes, the company which ran a petrol tanker involved in a Sydney crash which saw two people killed?

Vehicles operated by Cootes were yesterday collected by police and escorted to inspection stations in Sydney and Newcastle. Included was the Cootes fleet contracted by Caltex to deliver fuel to its stations and those it operates with Woolworths. Caltex has scrambled to find replacement trucks to continue supply ahead of the holiday weekend. Media reports say 26 faults have been found in just 12 trucks from the Cootes’ fleet of 80 vehicles impounded for inspection.

But nowhere in the reporting has the real owner of Cootes been identified. According to this website it’s the McAleese Group, chaired by Melbourne businessman Mark Rowsthorn, one of the founders of Toll (with Paul Little). He was also a senior executive with Asciano. BRW Magazine’s rich list has Mark Rowsthorn down as worth just over half a billion dollars. Another director is Don Telford, also a former Toll founder, and former senior executive at Asciano (spun out of Toll).

McAleese Group is an unlisted Melbourne company with ambitions to list on the stock exchange; media reports had valued it at $450 million. Will this crash and its aftermath sink that float?

SHY answers preferences charges. Crikey‘s story yesterday on the Greens’ role in electing Family First’s Bob Day to the South Australian Senate drew a quick response from Sarah Hanson-Young on Twitter, who claimed that: “Actually SA Greens preferences went to Xenophon and Labor well ahead of both FF and the Liberals.” That’s just not true, as multiple Twitter users quickly pointed out — the Greens went to a bevy of microparties, including Family First, before Xenophon’s second candidate Stirling Griff at number 63 (and the Liberals’ Simon Birmingham, at 64, was not “well ahead” by any definition). Hanson-Young’s tweet is preserved for posterity here. Meanwhile, Crikey understands that the national Greens are about to release a statement distancing themselves from the SA deal. Stay tuned.

Ex-minister located. Tips has been keeping track of what former Labor ministers who have quit politics are up to next. We were curious about what former environment minister Peter Garrett would get up to, but we’d heard nothing. Good news — we think we’ve found him (he’s on the left): 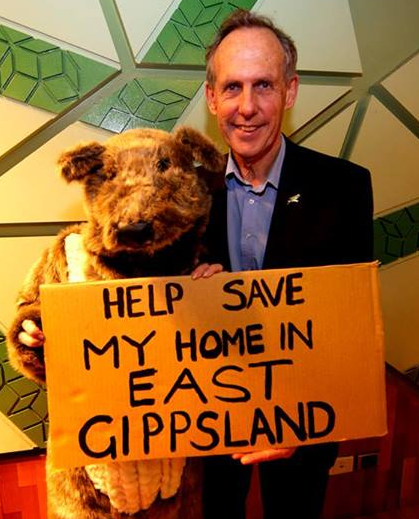 We’re all ears. Crikey gives the thumbs up to this South Korean initiative — a giant ear sculpture, which passers-by can speak into. Comments are then played in nearby City Hall so lawmakers have to listen. 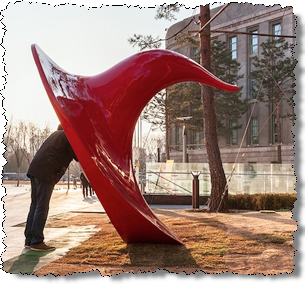 Crikey’s budget doesn’t quite run to a large ear sculpture, but we very much welcome your story ideas, tips and rumours. You can whisper into our ear here.

Whatever it takes (to win), ay Sarah???
Having achieved that, it is seemingly okay to bend the truth a little. Not someone I can support.