Good to see Lynton Crosby prepared to take a winning strategy from his old opponents back home into his new job as the electoral tactician for the Conservatives.

Lynton Crosby remembers. Listening to British Prime Minister David Cameron deliver his keynote address to the Conservative Party’s conference last night made me quite nostalgic. His message to voters not to give up on his administration when the job of economic recovery from recession was only half done was straight out of Australian Labor’s “don’t change horses in mid-stream” message in the 1980s after the recession we had to have.

Good to see Lynton Crosby prepared to take a winning strategy from his old opponents back home into his new job as the electoral tactician for the Conservatives. And nice to see the recycling too of that John Howard tactic of giving dole bludgers a clip around the ears with a neat formulation of “earn it or learn it”.

It is truly wondrous to behold politicians giving their solutions to unemployment that do not involve actually creating jobs for the newly “skilled” to get as they are shunted off their benefits.

Now the Senate results are in. If you thought the last minority government was a bad thing, wait until July 1 next year. You haven’t seen anything yet. Trying to forge a consistent majority with the help of three Palmer United Party senators, independent Nick Xenophon and representatives of Liberal Democrat, Democratic Labor, Australian Motoring Enthusiasts and Family First parties will be a nightmare for the Abbott government.

Good news for addicted jet-setters. The Mafeking electronic blockade on airplanes is soon to be relieved. An advisory committee of the US Federal Aviation Authority has concluded, reports the Wall Street Journal, that passengers can safely use hand-held electronic devices, including those connected to onboard wi-fi systems, during all portions of flights on nearly all US airliners.

Don’t look them in the eye. Forget the popular belief that eye contact increases the success of persuasive communication. Newly published research In the Eye of the Beholder argues that eye contact increases resistance to persuasion. Just further evidence I suppose that humans are not that different to those other animals, like dogs, who interpret a direct eye gaze as dominance or aggression.

Don’t say you weren’t warned. And you thought First Dog was just joking about this on Tuesday: 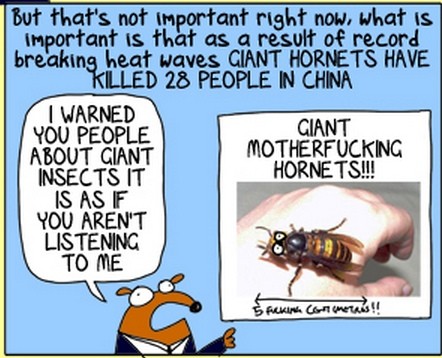 The BBC reported this morning: Attacks by hornets in northern China have killed 41 people since July, state-run media report. More than 1600 people have also been injured by stings in Shaanxi province, according to China News Agency. It says 206 people are still being treated in hospital, with 37 patients remaining in a critical condition.

Waiting for the Barbarians. Some lines by the Alexandrian Greek poet Constantine Cavafy — written in Greek in 1898 and first published, in Egypt, in 1904 — that The New Yorker thinks “seem particularly prescient this week”: 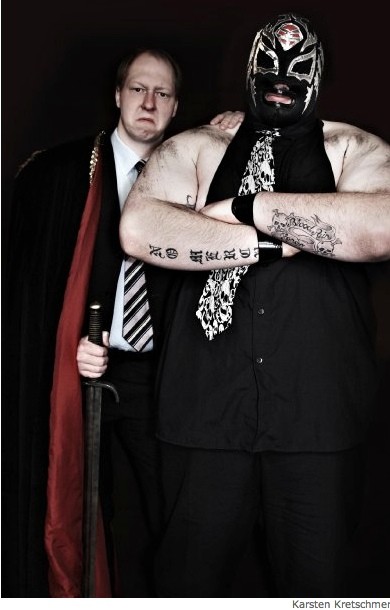 Didn’t Abbott say he would have no truck with minor parties?

Good catch klewso. But he also said there was a budget emergency and he’d turn the boats around.