The Attorney-General's Department pushed hard for data retention the moment Labor was elected, according to new documents released to Crikey under freedom of information.

The Attorney-General’s Department began pushing for a two-year data retention regime virtually the moment the Rudd government was elected, newly obtained documents reveal, and the Department’s secretary appears to have misled a Senate committee about his own role in the development of the plan.

Heavily redacted documents obtained by Crikey under freedom of information laws provide further detail of AGD’s strategy to convince the new government to implement a two-year data retention scheme, with the support of a wide range of agencies. Under AGD’s proposal, telecommunications companies and ISPs would have been forced to retain all data about Australians’ telecommunications and internet usage other than content and browsing history. The Joint Committee on Intelligence and Security earlier this year declined to recommend a data retention scheme after being asked to consider it along with a number of other national security reform proposals by former attorney-general Nicola Roxon.

The department approached Roxon’s predecessor, Robert McClelland, mere months into the job, when assistant secretary Catherine Smith sent him a brief in March 2008, barely four months into the Rudd government, requesting his approval to develop “in consultation with other relevant Australian government agencies … a model for a mandatory data retention scheme”. Smith appeared to dismiss privacy concerns. “Any mandatory data retention scheme risks being seen as increasing the threat to privacy,” her brief stated. However, the privacy implications were “perhaps not as significant as may first appear, since much of the information is already collected and stored by carriers”. 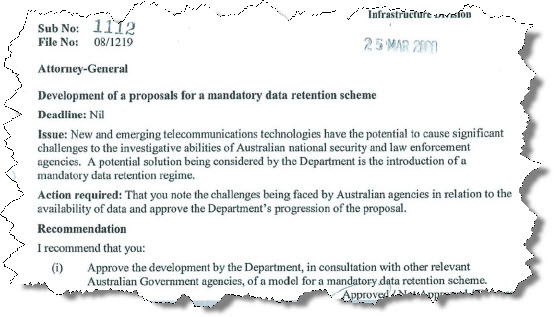 While AGD has redacted details of the model agreed by the working group, we know from a later letter from McClelland to former communications minister Stephen Conroy that the scheme included retention for two years (later versions of the scheme proposed “up to two years”).

In June 2009, Smith went back to McClelland and urgently sought his approval to consult with industry on the model that had been developed by the working group. “Consultation with industry is essential for further consideration of the two year model for data retention,” she said.

Smith’s brief was cleared by her division head, first assistant secretary Geoff McDonald, and by the secretary Roger Wilkins, who had replaced Robert Cornall in September 2008.  The detail is important because if we scroll forward four years, at an Estimates hearing on May 29 this year, Wilkins was asked about industry consultation on the data retention proposal by Greens Senator Scott Ludlam, and tried hard to downplay it. He told the Legal and Constitutional Affairs committee:

“I think there were some informal discussions. I think the consultation was done without, for example, my authority.”

He went on to say:

“They were interested in getting details about what it might cost or how it might work. So I would not want to elevate this concept of ‘consultation’ to something that has been done with the blessing of ministers or the secretary or someone like that.”

However, Smith’s minute, with Wilkins’s signature in the “cleared by” section, shows his evidence to the committee was incorrect. In September, the department wrote to the committee to correct its evidence, advising that government authorisation had been sought and obtained for consultations. What the department’s correction, almost certainly the result of Crikey‘s FOI request, didn’t include was that Wilkins also cleared the request for approval. The Secretary did sign the brief, a departmental spokesperson told Crikey today. “However, [t]he Secretary did not recall his clearance of this submission at Senate Estimates on 29 May 2013.” The Department believes its September correction “has clarified its evidence to the Senate Committee on this matter.”

Wilkins may well have forgotten “clearing” one brief among hundreds that would have come across his desk. But it fitted with his insistence to Ludlam that the “consultation” was low-key and done without approval by junior officers, when in fact the department regarded consultation as an “essential” stage in the development of a proposal that it had commenced as soon as Labor got into government. And it wanted McClelland’s approval for consultation urgently.

Further, another of the documents provided to Crikey is a further brief from June 2009, from Smith to Wilkins himself, explaining the need for industry consultation and asking that he note the request to McClelland for approval — although the document is undated and unsigned, and may never have been seen by him.

As we knew from documents previously obtained by the Pirate Party, the former attorney-general, as recommended by the department, wrote to former prime minister Kevin Rudd prior to August 2009 seeking his approval for industry consultation.

For whatever reason, the Attorney-General’s Department has sought to portray “essential” consultation with industry approved by the departmental secretary and the attorney-general and the subject of correspondence with the prime minister, as “informal” and done without the “blessing of ministers or the secretary”. In fact, data retention was an idea driven hard by AGD and authorised at the highest levels of the Rudd government.

Part two: Why a data-rentention scheme failed to get off the ground.

Is there such an offense as knowingly misleading a committee of the parliament and if so, what would the penalties be? It should be a cause for sacking, one would hope. This appears to me to be a case of Sir Humphrey here and without total honesty between the bureaucracy and the legislature our democracy is diminished.

RobinW – I would have thought it common-or-garden Contempt of Parliament. Like lying to Parliament it used to be simply “not done”.

AGD is notoriously bad for transparency. A colleague once asked for a document under FOI that was referred to in a Brief. Despite the reference in the Brief the department alleged that no such document existed.

On this article, officials who lie to oversight committees should be sacked for breaches under the Codes of Conduct in the same way that lower ranked employees would be dismissed for far less serious offences. It is absurd that the anonymous tweets of an ex-DIAC employee resulted in her sacking while senior public servants are very often promoted and any offences selectively ignored.

I always thought that Thud McClelland was put there for one thing – to prove that Rudd Labor had a sense of humour?