Channel Nine's prime-time tributes to the Packers and its television legacy were put to air with $2 million in taxpayer funds, a Crikey analysis has revealed. 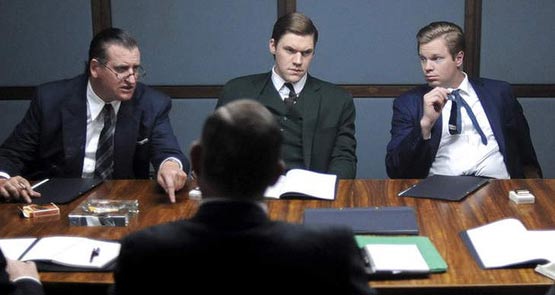 Australian taxpayers spent more than $2 million on six hours of Channel Nine prime-time television dedicated to the history of Nine and its founders and spiritual beacons Sir Frank and Kerry Packer.

Both mini-series dealt with key events in Nine’s history, including Sir Frank ringing up his own switchboard in Power Games and ordering that day’s races to be replayed (often it was Bruce Gyngell, the father of current Nine CEO David Gyngell, who took Sir Frank’s call).

Howzat! focused on Sir Frank’s son Kerry’s successfully bullish creation of World Series Cricket as a TV spectacle in the late 1970s. Both were promoted with bombastic advertisements on Nine filled with the Packers stalking the company’s Park Street corridors. Both Packers were played by Lachy Hulme.

While the Packer family has no direct stake in Nine (it is now owned by two US private equity conglomerates), the story of the network’s evolution and history is inextricably linked to the wheeling and dealing of the powerful clan that ruled the airwaves with an iron fist for decades. DVDs of the two series are likely to serve as unofficial histories of Nine for future generations of TV fans.

While the total production cost of Howzat! and Power Games is commercial-in-confidence, most Australian dramas cost about $2 million for every hour of finished product meaning the Australian people stumped-up about 18% of the shows, the latter billed by Nine as the “biggest drama event of 2013” prior to its air-date last month. Each ran for three hours spread over two weeks.

While Howzat! was a ratings hit with a five-city metropolitan audience of over 2 million per episode when it aired last August, Power Games was a disastrous flop with under 800,000 Australians tuning in each week.

Nine also receives substantial other rebates from Australia’s taxpayers, including a permanent 50% rebate on its free-to-air  TV license fee worth tens of millions of dollars and will benefit from changes to the federal government’s 75% reach rule, that currently bans networks from tapping 75% of the national audience. The company will tap the nation’s superannuation accounts in December when it proceeds with a $3 billion float to repay its US owners, Apollo and Oaktree, and pay down debt.

However, even given the rivers of largesse, the network still seems reluctant to invest in Australian content without the presence of government subsidies.

Screen Australia chief operating officer Fiona Cameron told Crikey the funding body’s cash should be viewed in the context of a network’s choice to buy either Australian or foreign content in a market saturated with cheap imports.

“Foreign content is cheap as chips … something like Two and a Half Men costs between $150,000 and $250,000 an hour, whereas something like Underbelly might cost $1.5 to $2 million an hour, so you can see that when a broadcaster has a bottom line in mind it’s always going to be very tempting to go offshore, especially when Two and a Half Men‘s ratings are so high. This kind of money is for higher-end Australian productions, with so much foreign programming around it puts the squeeze on Australian products,” she said.

The Packer family no longer holds a stake in Nine with Kerry’s casino mogul son James Packer first selling 50% of PBL Media, which included Channel Nine, into private equity in 2006 for $3.6 billion. One year after that, Packer sold off a further 25% for $500 million. In late 2008 Packer quit the board of PBL before it was rebranded Nine Entertainment Company.

The tax payer is subsiding 9’s self-gratification? Wait ’til A Currant Affair hears about this?
Then again, look what happens if you don’t play ball with a media mill-stone?

…… sorry “… look what happens if you don’t play ball with a media heavy-weight?”

Very satisfied by the failure of Power Games. People whatched Howzat because it was about something the public actually cared about, that being cricket, not because Kerry Packer was central to it. Howzat and both Magazine Wars series reflected the changing of society, unlike Power Games which was about the Australian business community – the same bunch of thickos now as then – and how to be an appalling father.

I’m sure when Mr Abbott hears about this injustice, he’ll do everything in his power to rectify things. Probably by giving Foxtel a few million of public funds, so they can make a great cinematic work, informing everybody what an outstanding citizen Rupert Murdoch is.

I can see the Murdoch story now, “Enough Rupe.”