Kim Williams is threatening to sue Fairfax over a front-page article this week. That and other media tidbits.

Williams v Fairfax defo battle. Ex-News Corporation chief executive Kim Williams has hired one of the country’s top media lawyers, Mark O’Brien, to take on Fairfax in a defamation stoush over his role as chairman of the Sydney Opera House Trust. Making the battle even juicier is the fact Fairfax was one of O’Brien’s clients only six months ago.

Williams is fuming over an article, which appeared on the front page of Monday’s Sydney Morning Herald and Australian Financial Review, claiming he stormed out of a board meeting disgusted with Opera House CEO Louise Herron. Williams and Herron issued a 13-point joint statement on Monday denying details of the story, which covered Herron’s handling of a tender for the Bennelong restaurant. Although the piece contained some inaccuracies — for example, Williams quit before the meeting in question not after — Fairfax argues they were minor and is currently standing by the thrust of AFR reporter Joe Aston’s story.

On Monday, O’Brien, a partner at Johnson Winter & Slattery, sent a letter of demand to the SMH and AFR over the story. Herron and the Opera House Trust have also sent separate legal letters.

Crikey understands Williams wants an apology and retraction, and is prepared to go to court unless Fairfax acquiesces. O’Brien has previously represented Kerry Packer, Alan Jones, Rene Rivkin and Gina Rinehart’s children. SMH journalists were initially outraged when the paper hired O’Brien because he had defended so many people the paper’s journalists had written critically about. If the Williams case goes to court, O’Brien would team up with fellow heavyweight Bruce McClintock SC, whose past clients include Gina Rinehart and 2DayFM.

If Fairfax does apologise to Williams, it would be the second time in two months. Last month the SMH said sorry to Williams over an article by opinion columnist Paul Sheehan. — Matthew Knott

Worner’s Seven overhaul. Seven West Media CEO Tim Worner has put his stamp on the company by revealing a radical restructuring of the management of Australia’s most profitable listed media company. He has axed his old gig as head of TV and flattened the whole business.

It’s a big move given that the company’s most profitable (and still growing) business is free-to-air TV — not magazines where sales and earnings continue to fall. The West Australian newspaper division has been exempted from the changes, even though that’s a dying area as well.

Gone from the management structure announced this morning are heads of TV and magazines — both are now under Nick Chan, the former head of Pacific Magazines, who has been appointed Chief Operating Officer. Worner says this is a “new and expanded role with all key aspects of Seven’s content creation and delivery across broadcast television, magazine publishing and online reporting to Mr Chan”.

The head of TV role has been vacant since Worner took the top job at Seven West in May. The other key change is the move to appoint Kurt Burnette, currently Chief Sales and Digital Officer, to a new role called Chief Revenue Officer, which will be “responsible for growing the company’s current revenue streams and establishing new revenue opportunities”. That makes sense because Seven has had considerable success in monetising some of its businesses in other areas of the company. — Glenn Dyer

Front page of the day. Australia’s own Lynton Crosby is back on the front pages … 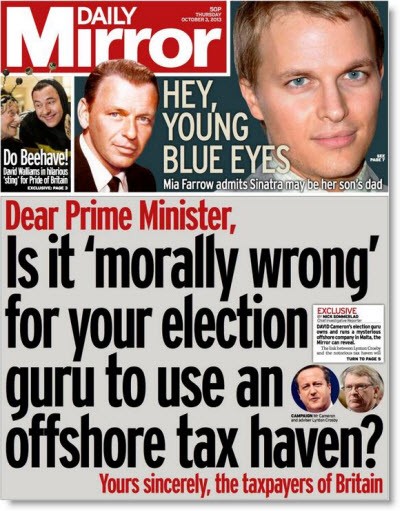