Summers cuddles up to flying ‘roo. The Anne Summers and Julia Gillard roadshow in Melbourne last night at times seemed to follow the same script as the Sydney event the night before. There was a sense of deja vu at the word-perfect replica of the introduction, to the “starry eyed optimist” quotes, and even the exact same question of “Tony Abbott is the new Minister for Women. What advice do you have for him?”, plus a question from an 11-year-old about misogyny. As Crikey reported yesterday, Qantas is a major sponsor of the event and senior executive Olivia Wirth was in attendance in Sydney with fiancé Paul Howes. But given Gillard’s selling of Summers as an independent journalist, how can the duo explain the flyer left on attendees’ seats … 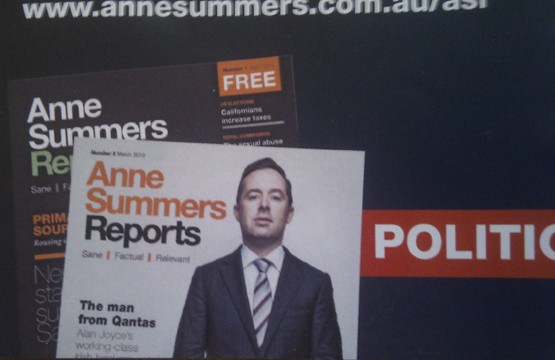 Will Hun report on brother Bolt? Another Age scoop from Richard Baker and Nick McKenzie today:

“A former Victorian energy bureaucrat has won her company a $1 million taxpayer-funded contract — awarded by her old public service boss — to oversee TAFE reforms despite her having no experience in the education sector and without facing a competitive tender process.

“Fairfax Media can reveal Department of Education and Early Childhood Development secretary Richard Bolt has extended the contract he gave to a firm directed by his former Primary Industries colleague, Marianne Lourey, to enable her to continue to lead Victoria’s TAFE reform taskforce for another 10 months at a cost of $432,418.”

Richard, it’s worth noting, is the brother of firebrand Herald Sun columnist Andrew. Reckon they’ll pick up the yarn?

Can’t give them away. Speaking of the Herald Sun, this from a Crikey reader:

“Visited the Royal Melbourne Show on Sunday with my 7-year-old son and noted that the (Sunday) Herald Sun was being given away near the entrance to the show from Showgrounds station. Not many people where availing themselves of this offer and I counted about 20 bundles of papers. Would this be counted in the monthly circulation/audit figures? Why weigh yourself down with a fat tabloid to lug around the show for a few hours in addition to all those showbags.”

Bikie gastronomes turn angry. What’s causing the bad blood between the nation’s bikies to reach boiling point? Over the weekend it was boots and chains-agogo at a Tapas restaurant in Queensland, and Tuesday saw more wild scenes at the Smoothie Shack at Nobby Beach. Is this normal bikie fare? Could it be all those Smoothie Shack antioxidants be angrying up bikie blood? It certainly isn’t Campbell Newman’s assertion that bikies are watching too many Underbelly re-runs, because really, is anyone doing that?

Mental note: change the date. On the eve of Mental Health Week, let’s hope the Queensland government’s commitment to mental health awareness is not reflected by the fact its website is still showing the dates of last year’s awareness week …

In a sorry state