Ecuador and the Amazon’s $3.6b decent proposal

The world had an opportunity to save parts of the Amazon from oil exploration. But diplomatic diddling means the developing world has abdicated its responsibilities to the globe's great lung. 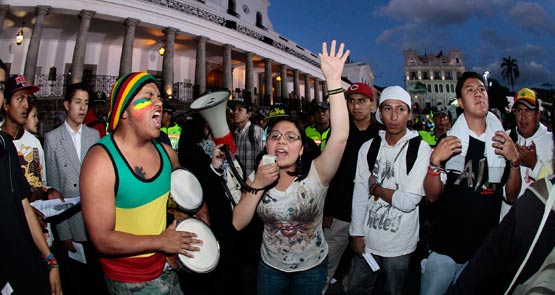 Weeks before the latest Intergovernmental Panel on Climate Change report came out, confirming a 95% chance of a 2 degrees+ rise, within the century, an innovative scheme to try and alleviate some of the damage quietly bit the dust.

In 2007, President Rafael Correa of Ecuador faced a dilemma. Increasingly sophisticated oil exploration had identified large reserves within the country’s eastern sector, in the Yunasi region. For the third poorest country in South America, with a per capita income of $5000 (50% of the global average, about 15% of the OECD average) this was a potential boon.

The problem was that the oil reserves were in the country’s rainforests, an extension of the vast Amazonian rainforests, that mainly lie in Brazil. Brazil’s share have been devastated by ranching; Ecuador’s are substantially undamaged, because of the country’s underdevelopment. The Yasuni has one of the highest most diverse biospheres in the world, with more tree species than the whole of North America, more bird species than the whole of Australia, and insect species which may number in the hundreds of thousands.

As with most of the continent’s leftist governments, Correa’s outfit is green as well as red, seeing the global ecological crisis as an expression of capitalism.

The answer they came up with was to offer the world a buy-out. For $3.6 billion, paid as a form of Amazon bonds, Ecuador would simply leave the oil in the ground, and use the money paid to fund the development that the oil would otherwise have released.

Paying people not to do something is hardly a new thing; for decades Australia maintained wool and wheat prices by paying farmers to scale down their yield. The idea of limiting polluting production in this way has been around for decades, and the United Nations revived it in concert with Ecuador. To allay concerns about billions being paid into a state account, it was decided that the UN would administer the bonds. The money requested amounted to only 50% of the oil’s total value.

So the world lined up to pay the 0.005% of global GDP to save a chunk of the planet’s lungs, right? Wrong. Aside from a $50 million pitch-in by Germany, and another $50 million from various sources, and commitments by the rest of the developed world could manage only a few promises to kick some money in if all the others did. In August, Correa ostensibly abandoned the plan. Timetabled to gather the money over a 13-year period, from the 2007 inauguration to 2020, only $330 million had been pledged, and only $13 million actually delivered. Correa denounced the developed countries of the world as “hypocrites”, emitting the bulk of greenhouse emissions, but asking the developing world to bear the cost, and forgo improvement in living standards.

Some say that Correa’s move is a bluff — a desperate attempt to focus attention on the issue. But he seems deadly serious — barking back against a grassroots movement in Ecuador, which has insisted that the plan be followed through with, and which is currently gathering signatures for a petition to try and force the issue to a referendum. Correa has responded to this threat from his (green) Left by arguing that poverty does more environmental damage than oil drilling. Only 1% of the Yasuni is to be drilled, but this will eventually release 400 million barrels into the world.

“Countries like Ecuador are supposed to stay at a semi-developed level, as a touchstone of the natural world we have left behind.”

So why did the scheme attract so little support? Much of it was simply political. Though the actual moneys were to be held in UN trusts, Correa said that Ecuador would decide how they were spent. That, it is said, worried western donors, especially the US who see the South American leftist nations as enemies, more oriented to Russia and China, and unrespecting of the US’s implicit claim to dominance over the hemisphere.

But the crucial culprit appears to be, surprise, Germany, whose capacity to screw things up seems unrivalled.

The pre-2009 “grand-coalition” government of the CDU and SDP had been behind the deal. But in 2009 Angela Merkel increased the vote of the CDU, and was able to drop the centre-left SDP from the coalition, and govern with the free-market FDP. At that point, FDP secretary-general Dirk Niebel took over the Ministry of Economic Co-operation and Development, from a left SDP minister Heidemarie Wieczorek-Zeul. Zeul was a strong supporter of the Yasuni-ITT proposal. Niebel was against it and killed off Germany’s participation in it, explicitly arguing that it would do nothing for either reducing emissions or protecting biodiversity. (The world had its revenge – in the recent German elections, the FDP, the only serious anglo-style classical liberal outfit on the European continent, had its vote wiped out, losing its party status).

Many people — from both sides — have blamed Correa for being intransigent on the money issue, which may or may not be the case. But the man is playing a tricky game with national sovereignty, and around Ecuador’s single largest export sector, so the issues are complex.

What is more interesting is the way in which that national sovereignty issue is treated when a global issue is involved. Ecuador has been accused of blackmail, a “give us the money or we’ll shoot the trees” policy.

The charge is bizarre. From the time that green politics went mainstream, there has been a barely concealed criticism for the brown politics of developing nations. The developed nations are by now, all deforested — that’s how they became developed. The developing nations, still stuck with actual nature, are then charged with the individual cost of maintaining them and forgoing the value of extraction. Presuming that we, as a species, not only need a forested biosphere, but that we want to retain the particular qualities of the Yunasi, the cost is as much ours to bear as Ecuador’s, for the same reason that the cost of managing Uluru does not fall entirely on the local municipality.

Were every country of equal income and with a proportionate burden of biosphere that wouldn’t be the case. But the world ain’t like that, and the idea that developing nations should bear the burden of such costs alone is not only unfair, not only hides the history of colonialism, and the environmental costs of our own development — it also has a barely disguised primitivist agenda. Countries like Ecuador are supposed to stay at a semi-developed level, as a touchstone of the natural world we have left behind. When they depart from that, they bear unique calumny for the entire environmental crisis. Meanwhile for want of the price of a mid-size naval cruiser, the developing world has abdicated its responsibilities.

Two degrees by the end of the century? At the very least.

The Amazon is on fire. What can the world do?

They could probably crowd-source that now and raise the money ten bucks at a time people all over the world.

“Hypocrisy” doesn’t even come close to it.

I’d donate in a heartbeat Nici

count me in too nici and buddy – maybe there is something already set up or we can set it up?? dunno much about doing things like that (obviously) 🙂

Yes, it’s a shame that the world couldn’t chalk up the cash as Correa proposed, but it’s not surprising. The world pays to take oil out of the ground, not to leave it in!

In the end, this will work out much better for Ecuador. It’s hard to argue with it from anything but a deep ecology perspective. There are tram tracks being laid in Cuenca, an underground metro system being built in Quito, and studies going on to work out what form of public transport will work best in Guayaquil. What better way to spend your oil money and move beyond car-centric transport.

Meanwhile, Australia is importing oil and building more roads. But hey, our pollies are career party hacks and Ecuador’s President came straight from a university political economy department. What more do you expect?