The Australian Financial Review has kept quiet about the merger of its reporting team with Fairfax's BusinessDay.

“… fundamentally compromised and cannot possibly continue in the role. It’s been very obvious in the short time he’s been in the MW chair that he is obsessed by the perceived — HIS perceived — failings of the newspapers in Rupert Murdoch’s News Corporation.”

McCrann was particularly peeved that, during a publicity push for his new book Breaking News: Sex, Lies and the Murdoch Succession, Barry told the ABC’s James O’Loughlin it appeared News of the World had deleted messages on schoolgirl Milly Dowler’s phone. McCrann argues it is “extraordinary and indefensible” Barry didn’t add that it now appears extremely unlikely the paper deleted the messages (though it did hack her phone and listen to them). Regular Hun columnist Rita Panahi makes the same point today, arguing:

“Barry’s failure to correct a significant falsehood is particularly astonishing given that he regularly uses Media Watch as a means to attack and belittle conservative voices for the smallest of errors, no matter how inconsequential.”

Barry, who will return to air as Media Watch host next year, has pointed out his book acknowledges it is unlikely the NotW deleted the messages. On Twitter this morning, Barry argued he had made no false claims and called for Panahi to apologise. — Matthew Knott

Hadley guilty on ACMA breach. 2GB Mornings host Ray Hadley breached the accuracy requirements in the commercial radio code of practice, the Australian Communications and Media Authority has found. The verdict concerned a broadcast last year in which Hadley followed up a front page Daily Telegraph story (which the paper later corrected) claiming children visiting Parliament House would no longer be given water and snacks. The ACMA found 2GB had not done enough to ensure its broadcast was accurate. The verdict is a win for ex-Treasurer Wayne Swan, who filed the complaint with the ACMA.

McClymont’s Senate bid. The Sydney Morning Herald’s investigative star Kate McClymont has put her name forward for a prestigious post on the University of Sydney Senate. McClymont studied at USyd, as did her mother, father and siblings. Her three children are now following in her footsteps. Aiming to repeat the success of the Kevin07 and Obama12 social media campaigns, McClymont has launched a Facebook page and is courting votes on Twitter. 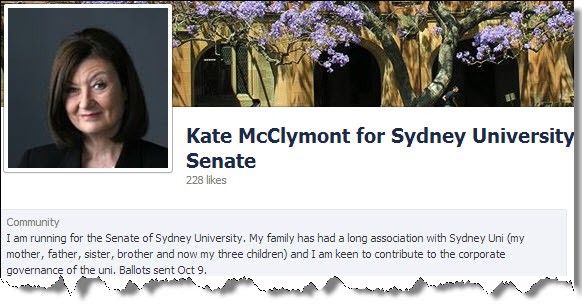 No news is bad news for AFR. Readers of The Australian Financial Review had to search high and low to find news of the newspaper’s own big news — that its reporting will be merged into the business sections of The Sydney Morning Herald and The Age. Yes, there was a small story at the bottom of page 22 of today’s print edition, but the closest it came to revealing the greatest editorial dilution in the AFR‘s history was this:

“… plans were proceeding on the integration of business teams across Fairfax’s titles to ‘produce efficiencies and remove duplication’. ‘As a result, we are proposing a reduction in Business Media staff of approximately 25 employees through a redundancy program,’ he [Australian Publishing Media managing director Allen Williams] said in the email.”

A fine example of Fairfax “independent” journalism? The announcement go a lengthier treatment in BusinessDay in The Age and SMH.

Fancy that, News Corp journos getting hot under the collar about misrepresentation in the media. Paul Barry may have twisted the facts, however the degree of phone hacking hardly exonerates News Corp, allowing them to take the high moral ground!