A Greens preference deal has snared votes for Sarah Hanson-Young while funneling preferences to conservative former HR Nicholls Society board member Bob Day, who has the effective balance of power.

In an echo of Victorian Labor’s botched 2004 deal that saw Steve Fielding elected ahead of Jacinta Collins, the pushing of the Senate button yesterday saw leadership aspirant Hanson-Young returned with anti-gay marriage advocate Day at five and Liberal Simon Birmingham at six. Day received 3.76% of the primary vote or 0.26 of a quota in the race, which was formally declared at Adelaide’s Stamford Plaza hotel this morning.

A summary of the key preference flows in SA shows that the decision of the party to go rogue and draft in Bob Brown to directly negotiate with the micro-right will likely result in a tranche of Tory policies becoming Australian law.

Senior party powerbrokers, including Brown, resigned Christine Milne chief-of-staff Ben Oquist and Hanson-Young herself decided to throw ideology to the wind in South Australia, placing the Palmer United Party and Katter’s Australian Party ahead of Labor and other micros ahead of Nick Xenophon’s No. 2 candidate Stirling Griff. The approach angered Labor with senior figures now extremely reticent to deal again with the Greens in 2016 — a scenario that if rolled out nationally could deny the party a single Senate seat.

It has also caused consternation inside the Greens with other states irate at the perverse consequences of “dealing with the devil”.

In the wash-up, Hanson-Young was elected on PUP and Labor preferences but her preferences went on to elect Day instead of Griff. In another grim irony, the other possible party the Greens could have elected was the No Carbon Tax Climate Sceptics.

The Greens published a full-page SA newspaper ad in the lead-up to polling day claiming a vote for Xenophon was a vote for the Liberals. In fact, Xenophon’s ticket was split down the middle. It drew an angry rebuke from the independent Senator, who accused the party of peddling desperate “lies”.

The analysis of the Greens’ group voting ticket shows the parties placed before Xenophon’s Griff were part of the Glenn Druery-organised “Minor Party Alliance” — Crikey understands the Greens were asked to preference certain parties within the Alliance to receive a return flow. The usually ethical Greens didn’t play ball with Druery elsewhere in the country with the SA anomaly producing the first Family First Senator since Fielding ascending to the red leather on Greens preferences. The crucial “choke point” in the race can be seen at count 33 on Antony Green’s Senate calculator.

Day is staunchly opposed to same-sex marriage — the only elected Senator aside from Liberal Cory Bernardi who continues to hold out against the tide of equal love.

Here’s an analysis of where Greens’ preferences went:

And what they got: 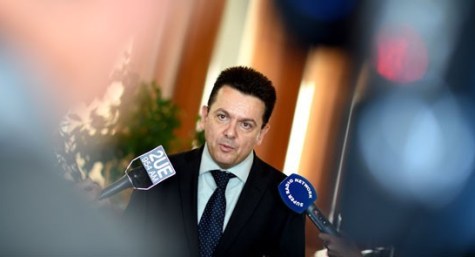 More reason to get rid of above the line voting. It would avoid the need for these political strategies at the expense of principles.

Let voters choose their preferences up to a certain amount considered appropriate by the experts or number the whole ballot paper as desired.

“The usually ethical Greens”? On what basis can the behaviour exhibited here be said to be atypical? Oh, and they were peddling desperate lies, not pedalling them.

And now there are unconfirmed reports that, in spite of deals with Palmer, Green WA Senator Ludlam is definitely gone. What a shame.

The suggestion that Day was elected on Greens preferences is just plain false. Going by the ABC’s Senate calculator, Day is indeed elected once Hanson-Young is elected and her surplus votes are distributed, however, the fact is that more of the votes sitting with Hanson-Young at that point are originally ALP votes. It is Labor preferences that Day is elected on. Day receives about 6% at this distribution to push him past a quota from 12% to 18%. Of this 6%, just 1.3% are votes that were originally Green votes, this would not be enough to push Day past a quota. On the other hand, of the 6%, 4.16% comes from votes originally for the ALP, which is more than enough to push Day past a quota. It is unambiguous that it is ALP preferences that Day is elected on.

This is factually incorrect. It is true that Bob Day gets elected on the surplus once Sarah Hanson-Young is elected as shown on the calculator but this does not show the full details of the figures. The majority of these votes are ALP ticket votes, not Greens. There were 60,141 ticket votes for the Greens, their surplus value after Hanson-Young is elected is 0.3029, so this is approx. 18217 votes for Bob Day, yet at this point in the count he receives over 57000 preferences and requires just over 25000 to reach quota, so even without the Greens ticket votes he reaches a quota with the preferences of the ALP and others (figures taken from the data published by the AEC).
Furthermore you seem to imply that the Greens gave preferences to Family First at this stage due to some deal but I see no evidence of this whatsoever, certainly FF did not preference the Greens highly.
Personally, as a Greens voter, I did not agree with the ticket and chose to preference differently, and there was potential for Greens preferences to make a difference in electing Bob Day (though only in preference to other candidates they don’t particularly favour either), but the fact is that they did not and I think this article only serves to confuse the issue of how preferences actually work.

I see some respondents disagree with the interpretation of the preference flows, but either way the current system is a farce, with many voters unbeknownst to them having their votes passed on to what would be for them totally unacceptable candidates. Reform is essential. Why not simply ask voters to number a minimum of six candidates (or 12 in a Double Dissolution) and get rid of above the line voting.