Tony Abbott still takes the lion's share of media mentions, despite controversy among his MPs.

The volume of media coverage for Prime Minister Tony Abbott this week is more than four times greater than the next in line, Foreign Affairs Minister Julie Bishop, who garnered headlines on two fronts: debuting as chair of the United Nations Security Council in New York and for her dealings with the Indonesian government on asylum seeker policy.

The dearth of coverage for anyone bar Abbott is illuminating when you consider there have been plenty of other stories for the media to pursue this week, the most salacious centering on Attorney-General George Brandis and Agriculture Minister Barnaby Joyce expensing a trip to shockjock Michael Smith’s wedding.

With that scandal Brandis is our biggest mover this week rising 15 positions, and he faced heavy fire from Acting Opposition Leader Chris Bowen who suggested the potential breach of the old ministerial code of conduct is of even graver concern when you consider it’s the A-G who is to write the new one.

Bowen also fronted the media to defend Kevin Rudd’s record in the last parliament following former PM Julia Gillard’s return to the public conversation this week. It’s fair to say her comments around being the first female prime minister, while justified, explained some things, but not everything.

But back to Abbott’s enormous coverage lead: it reflects that majority governments control the flow of information far more easily than minority leadership, and that since taking power the Liberals have hardly come out guns blazing on the policy front (which is also why the new Treasurer is so middle-ranking on our chart). That and the current lack of an opposition leader to take the fight to the PM, though Bowen has been giving it a shot, helped by the fact most discussion has been about his old portfolio area of immigration. 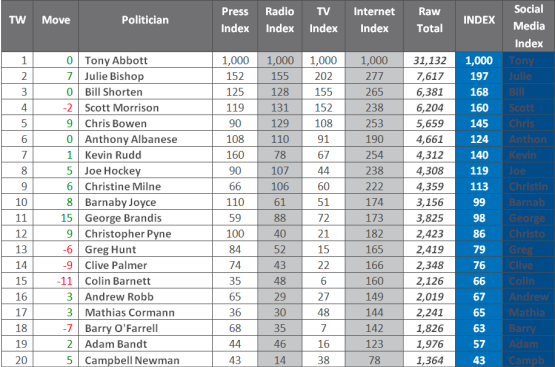 Just the one Liberal politician topped the social conversation this week, the others in the top five are bound up in ALP leadership discussion, past and present.

Hawthorn premier at the weekend, Sydney Swans player by mid-week with long touted rumours of a Greater Western Sydney signing flung out the window.