If Clive Palmer wins a seat in Parliament, should he be allowed to vote on everything? Governance expert Stephen Bartos argues this situation is unprecedented and needs attention. 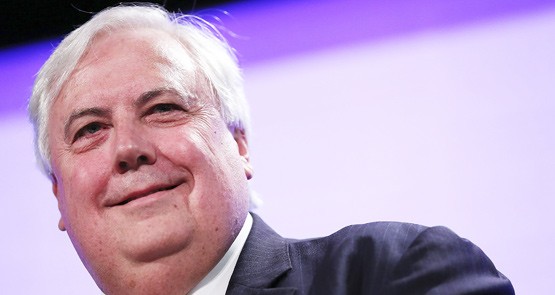 If multi-millionaire Clive Palmer wins a seat in federal Parliament, we are entering uncharted territory in the management of parliamentarians’ conflict of interest.

Palmer is close to winning the Queensland seat of Fairfax; the result is so close that a painstaking recount is underway. If he takes the seat, should the mining magnate be allowed to vote on issues like the environmental regulation of mines? What if he gains a personal benefit from the vote’s result?

Here’s what the rules say. Members of Parliament are required to declare their interests; shares, property, company directorships, gifts and incentives received, and similar pecuniary interests. The register is published.

But there are few rules governing what MPs are meant to do if they have a conflict of interest. The parliamentary library has noted that states and territories have far more documentation and advice about conflicts of interest and ethics.

That it is a reflection of the far greater potential for decisions of a state, territory or local government to deliver a personal benefit. The recent New South Wales example of granting of mining leases, investigated by the Independent Commission Against Corruption, is a prime case. Local governments through zoning decisions can turn a worthless plot of land into a goldmine. Decisions about roads, new shopping developments and the like have enormous potential for conflict of interest. Unlike the states, the Commonwealth has no independent mechanism for investigation of corruption on the part of parliamentarians and public servants.

The argument from our parliamentarians has been that, at the federal level, there is less potential for a direct benefit to be conferred on an individual, because MPs deal with at the economy, defence, trade, social welfare etc.

There are rules that prevent members of Parliament getting a job from the Commonwealth government or, if they are the sole owner of the company, from that company being given a contract. It could disqualify them under section 44 of the constitution. The definitive book on House of Representatives Practice (2012) says on page 142:

“Standing order 134(a) states that a Member may not vote in a division on a question about a matter, other than public policy, in which he or she has a particular direct pecuniary interest. Public policy can be defined as government policy, not identifying any particular person individually and immediately.”

It quickly notes that under this definition, expulsion of a member of Parliament for conflict of interest is highly unlikely, because almost everything that is debated is public policy.

Take Palmer. Clearly his vast and in some cases speculative mining interests would benefit from a relaxation of environmental rules. But that is a public policy matter. He might benefit, but would argue that the whole of the country would benefit as well. He has already claimed that he is less likely to suffer from conflicts of interest, because he is so wealthy he won’t be swayed on particular issues.

“This is the first time that someone has used their wealth so overtly to propel others into the Australian Parliament.”

There is in any case little influence Palmer himself can bring to bear through a seat in the House of Representatives. One vote makes no difference when the Coalition has such a large majority.

What gets more interesting is the influence of Palmer United Party senators. It looks like there will be two or three of them. They owe their positions to Palmer.

After June 30, every Senate vote will rely on cobbling together a coalition of minority votes. There is far more chance that a matter of particular interest to Palmer personally could be swayed by some of the PUP senators. There is absolutely no precedent for this. All of our rules about conflict of interest relate to individuals rather than parties. So for example if a member or minister from the Liberal party in the lower house were to declare a conflict of interest and withdraw from debate on a matter, there is no expectation that Liberal senators should do the same. Conflict stops with the individual.

Does that apply with PUP? We simply don’t know. This is the first time that someone has used their wealth so overtly to propel others into the Australian Parliament.

To look for precedents we have to go back into history. The mother of Westminster parliaments, the British House of Commons, has always had a far looser approach to conflict of interest. It is quite common even today for British MPs to hold down other jobs. Until recent scandals, MPs could be lobbyists for their own corporate interests. But it is a model of probity today when compared to the British Parliament in the 19th century and before. Prior to the reform acts of 1832 and 1867, wealthy individuals could easily buy their way into Parliament. Rotten boroughs could go to the highest bidder, pocket boroughs with tiny electorates were told how to vote by the local lord of the manor, and bribery was perfectly legal.

The House of Commons became used to very wealthy men (and they all were men) seeking to manipulate the laws to their own advantage. The best defence against corruption was a free and activist media, exposing the worst of the excesses and championing reform. Still, that was also the time when the British Empire under Queen Victoria spread around the globe and generated massive wealth for Britain.

Palmer and his supporters would undoubtedly argue that looking after the interests of wealth-creating individuals is also in the national interest.

Australia has no rotten boroughs, but at this election we have seen how effective personal wealth can be in an election campaign. A better parallel is perhaps the practices in the United States, where money talks loudly and it is easier for the rich than for the poor to buy the advertising and support they need to win an election. Here, as there, the best way to manage conflict of interest is via strong institutions of transparency and scrutiny.

Perhaps if we had a federal anti-corruption body it could be empowered by legislation to enforce a parliamentary code of conduct and punish those who breach it with penalties.

One parallel is with Berlesconi (sp?) in Italy.

every day, we go further down the american (disfunctional) path.

The potential for misuse of power is magnified by Palmer’s Party being the “Palmer United Party”.
He is the brand, the face, the money. He wrote the policies, he selected the candidates.
Should his Senators be able to vote to repeal the Carbon Tax, when it clearly advantages the coal mining billionaire who funded their campaigns?
It makes councillors benefiting from a rezoning look very small cheese indeed.

It is hardly be without precedent to have a wealthy Member of Parliament and you don’t need to go as far back as you have in the article.

Senator Warwick Parer, a Liberal, managed to have significant interests in mining through some dodgy Family Trust arrangement and be Minister for Mines and Energy at the same time. Astonishly, his Wikipedia entry is fairly sanitised and mostly talks about his work in hospital charity since that time. He was one of the Ministers in the first Howard government that caused a lot of controversy although he wasn’t sacked like seven or so other Ministers for breaches of the original Code of Conduct even though he had an obvious conflict of interest.

John Hewson was wealthy and married to a wealthy women at the time he was Leader of the Liberals. Malcolm Turnbull is independently wealthy. Joe Hockey is married to a wealthy woman. You could say the same sort of things about their potential conflicts of interest. They are both ministers in this government and determine policy. There are possibly others if you care to look.

Whatever Clive Palmer does or doesn’t do, he won’t be a Minister, much less the Minister for Mining Booms and Destruction and isn’t currently a member of the government parties. His PUP is a minor party and may not even hold the balance of power in the Senate given the motley lot of other self interested independents we are to have inflicted on us.