No unas vacaciones. Telstra exec Brendon Riley worked hard at a conference in Barcelona earlier this year, emailing “a message from Brendon” to some staff (“Hello from Barcelona …”). The email included a nice pic of the lavish function centre and comments like:

“From there it was into the Ericsson hall which is massive and I have to say they have great catering. When you are on your feet all day and going from meeting to meeting, it’s nice when you can get a nice tea or coffee and a quick snack!”

But not everyone appreciated the message when Telstra decided to axe 1100 staff last week. The Herald Sun rumbled about the exec “boasting about his junket” as nervous staff wait to hear if they’ve kept their jobs. We’ve received this little graphic which is doing the rounds among some Telstra staff: 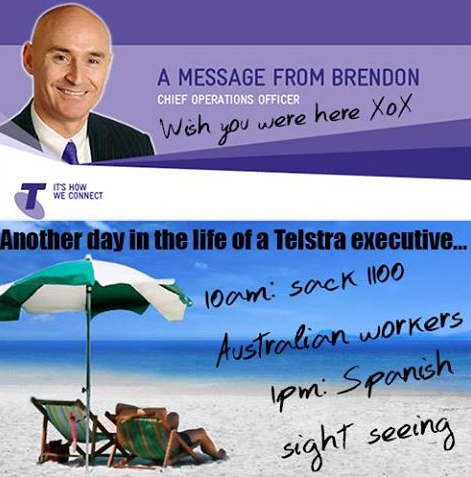 We asked Telstra about the debate around the exec’s missive from Barcelona. A spokesman defended the trip:

“The Mobile World Congress, in February this year, is the most significant industry event on the telecommunications calendar. More than 30,000 people attend including the CEO’s of all of the world’s top 10 telcos and major device manufacturers so it would be crazy to suggest that the man responsible for running our network not attend.”

Right grabs prestigious uni union. To the wonderful world of student politics, and in extraordinary left-busting scenes at the University of Sydney last week, students elected their first right-wing president since Belinda Neal in 1984 after the Ferguson Left delivered control to Student Unity stalwart Jen Light. Greenway MP Michelle Rowland is a patron of the campaign and rightists celebrated long and hard at local inner-west watering holes well into the night with a huge bar tab put on out of her own pocket. Sydney Uni students that bother to vote directly elect the SRC president, NUS delegates and 33 councillors and those councillors then elect the office bearers.

The groundbreaking Unity-Fergs deal let Unity dominate the vote and assume the presidency for the first time since Neal triumphed over Anthony Albanese — the SRC has been considered National Labor Students/Socialist Left property with most of Albo’s inner circle, including newly-elected Marrickville mayor and likely Newtown state election candidate Jo Haylen, reigning supreme. Left number crunchers have been left shaking their heads and there is now a massive likelihood of bitter recriminations that could cut short planned careers on Capital Hill — the grassroots and broad Left ran separate tickets and preferenced each other but no one expected NLS to come third and produce a weak preference flow. Previous SRC presidents have included Prime Minister Tony Abbott (1979), and numerous justices of the High and Supreme Courts.

Can you help? Our very own First Dog on the Moon is helping to spearhead the community search for the “budget emergency,” which the Coalition was so terribly worried about in opposition, but has now gone AWOL. Community-minded Dog has drawn up a poster to aid the search and it is turning up in some interesting locations (read about the campaign here). 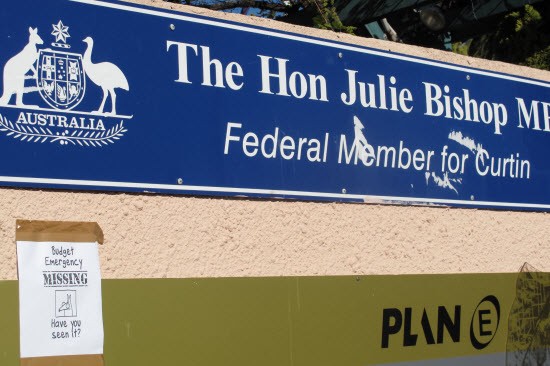 If you spy the poster in a good location, email us a pic. 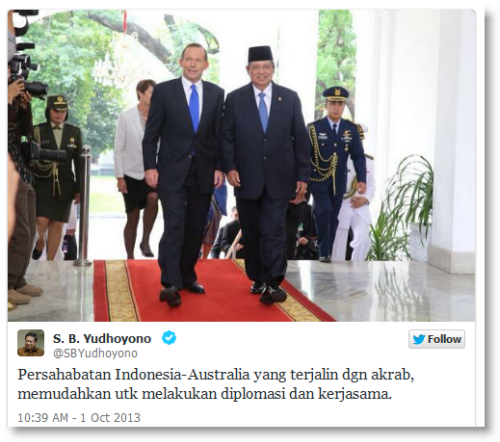 Google translate reckons this amounts to “Indonesia-Australia friendship is intertwined with a familiar, easy to commit diplomacy and co-operation”. So it sounds like the visit is going well (although SBY did misspell Abbott as “Abbot”, twice — we can forgive him that however as Ms Tips has misspelt a president or two in her time). SBY tweets at @SBYudhoyono if you want to keep track.

Mitt keeps eye on the ball. Within hours, the US government is due to shut up shop and stop paying 700,000 workers due to a Congress stand-off. Good to see has-been presidential hopeful Mitt Romney is focussing on the big issues today:

For US$26.99 one can have access to recipes for “Peppered Pork Chops with Peach-Vinegar Glaze, Welsh Skillet Cakes, Honey Wheat Bread (which Ann made regularly for five growing sons), and Mimi’s Buttermilk Pancakes, which she and Mitt shared with their Secret Service detail at the end of his presidential campaign”. Might we suggest a cookbook by Tim Mathieson or Janette Howard?

What we will lose if Scotland becomes independent

Budget emergency needs to be addressed

That pic? “Bambang and “Bang Bang” – all cowboy and no hat”?