US shutdown politics Cruzing to a Boehner

Pundits are taking the looming US shutdown as evidence of right-wing bubble thinking. Maybe, or maybe it's a hard-right strategy to complete a final takeover of the Republican Party. 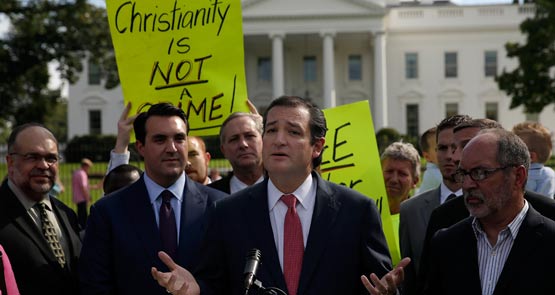 Last time the United States government shut down, in 1996, the internet had just become “the web”, Google didn’t exist and Amazon had just started up. Twenty per cent of people owned mobile phones, “globalisation” was the buzzword and the whole concept of “capitalism” had all but disappeared from public discussion. There were obscure terrorist incidents by a group known as al-Qaeda, though it was another group who’d tried to blow up the World Trade Center in 1994. Imagine if they’d succeeded! The world was still dominated by the old political power blocs, by the mega-press and broadcasting.

The Republican Party was still dominated by its mainstream “moderate” faction. Yet a new, more “conservative” faction — i.e. capitalist radicals — had captured the speakership of the House, and put their candidate Newt Gingrich in. Gingrich, author of Contract With America setting out many of the ideas that would inform the Tea Party — radical reduction of domestic spending, increased projection of US power abroad — led the party towards the first shutdown, demanding the contract’s implementation.

Bill Clinton held his ground (he had already given much of it away on welfare in any case), the shutdown occurred and the American people blamed the Republicans. Though they retained power in Congress, they lost the 1996 presidential election soundly and, had it not been for Clinton’s extra-curricular shenanigans, would have retained the White House in 2000. The shutdown also finished off Gingrich, who was eventually knifed by his own party.

Disaster all round. So why is the GOP pursuing the strategy again? The dominant theory is that the Republican Party has become so denuded of centrists (on the US scale) that its bubble-reality has become total. One thing that has changed in the US since the 1995-96 shutdown has been the creation of an entirely separate right-wing mediasphere, dominated by Fox News, but surrounded by magazines, blogs, conventions, movements like the Tea Party, and the shadowy money-machines behind them.

In 1995, rolling news was CNN. Mildly “liberal”, it was news focused and anodyne. Now, there are three networks filling their schedules with talking heads, all of whom radicalise themselves as a way of capturing the market. The result, as we know, is that over the past decade, the Republican Party has been entirely reconstructed. In 1996, Gingrich and his cohorts had to persuade close to 80 or so mainline Republicans over to the idea of a shutdown. Now Peter King, the Islamophobic Long Island Republican who leads the “moderates” — ha! — had trouble finding 25 Reps who would cross the floor.

The mechanism of the shutdown is that a bill guaranteeing supply of funds has had attached to it an amendment delaying the implementation of Obamacare by a year, and abolishing a medical instruments tax intended to cross fund Obamacare. The Democrats in the Senate have rejected it, and have proposed instead a “CR” (clean resolution), i.e. a supply bill with no riders. The House has rejected this, and this is the bill that King and others may crack around, and allow to pass.

But 25 cross-votes would only just be sufficient to get it through, and US House of Reps votes are notoriously undeliverable (you can vote, and then change your vote if you wish), and it would be a major and disastrous move for the renegades (some of whom are thinking about their Democrat-dominated constituencies, and others of whom are going against their Tea Party-dominated zones). The party is thus on the verge of its most momentous split around a vote in decades.

That of course is the other explanation for the strategy: led by the Texas Tea Party senator Ted Cruz (pictured, speaking at a rally last week), the Republican Right have pursued an ultra-ist strategy to force the conflict. Cruz and others tried to filibuster the supply bill — itself an unusual move — and lost that, 78 to 19. But Cruz’s loss was a sort of victory in forcing right-wing GOP members to decisively choose one side or the other, and terrify pseudo-Tea Partiers into stalwart behaviour.

The ultimate aim for Cruz and co has been this split. Indeed, so ultra-ist are they, they are trying to force a split within the Right. Thus Rand Paul has now — in the past half-hour — lost his nerve and called for a “clean CR”, a product of the fact that Cruz, his rival for the presidency, has claimed the hardline position. Their goal is the speakership — i.e. leadership — of the party, and current speaker John Boehner is dead in the water. Once he’s gone, the Right will have completed its long march towards regaining what it lost in the last shutdown — and then march on to a staggering loss in 2016. But they are content to wait, decades if necessary. Sooner or later they believe they will get the call, and in one four-year term, reconstruct the entire country.

A week may be a long time in politics, but 20 years is the blink of an eye.

“FUX News – catering to cretins. Let Murdoch do your thinking 4U!”?

Time for the navy seals to locate and terminate the ancient fossil who is a colossal tossil. He helps to bring the US to a standstill, he will be the cause of the fall of the tory government in England once the filth has been prosecuted and had foisted a broken unit on us.

Like the master’s apprentice he starts something he can’t control.

i really hope it happens, and with just 10 minutes to “doomsday” looks like i’ll get my wish!

The other thing is that at the rank and file level the Republican Party is far more extremist. Any Republican that crosses the floor has sod-all chance of retaining preselection.