The pending US government shutdown keeps markets subdued across the globe. 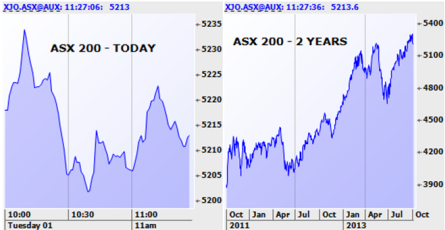 The market is down 5 points. Dow Jones down 129 on US and Italian political uncertainty. It was down 172 at worst. It closed up 4.7% for the quarter.

The US Government is due to shut down at midnight their time (2pm our time).

The US 10-year bond yield continues to fall, down two basis points to 2.610% overnight (bonds up again).

The only economic number out last night was the Chicago PMI which came in ahead of expectations at 55.7 against consensus of 53.7 and last month’s 53.0.

China’s HSBC’s PMI number came in at 50.2 yesterday which was below an expected 51.2. Official PMI numbers are due today.

The Aussie dollar held up at 93.24c as the US dollar slipped on concerns about a government shutdown. The US dollar is at an eight-week low with the euro at its highest since February despite the possibility of a snap election in Italy and a consequent Italian credit rating downgrade. The GBP hit its highest level this year.

Japanese market down 2.06% yesterday as Japan’s ruling coalition agreed to a ¥1 trillion tax break. Lots of economic data out of Japan today including household spending and the Tankan manufacturing and non-manufacturing indices.

Chinese market up 0.68%. Chinese banks are closed for Golden Week although official PMI numbers are due out today.