Rundle: dad’s the word on the Right. Attacking someone’s dad, is that a thing on the Right now? Two years after Alan Jones, the world’s highest-paid simperer, claimed that Julia Gillard’s father had “died of shame”, the UK Daily Mail has adopted the style, running a full piece attacking Labour leader Ed Miliband’s father, Ralph, as “an evil man who hated Britain”. Miliband senior was a European refugee, who came to Britain just escaping Hitler’s clutches. He then enlisted in the British Navy, and in peacetime became a professor at the LSE, contributing to the development of that institution as a world leader. 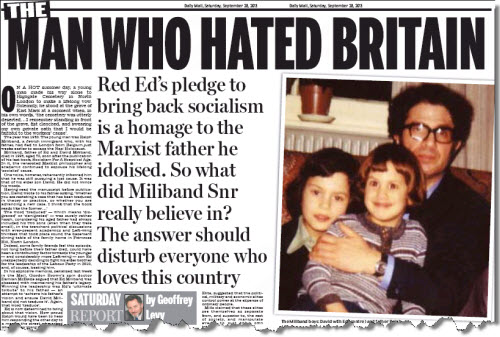 The Mail‘s objection? Miliband senior was also a Marxist, who wrote a half-dozen works of acute sociological analysis. (Currently being reissued, you may soon be purchasing them for Senator George Brandis). The object of such vicious attacks is obvious: to get under the skin of an opponent, rattle them psychologically. In the case of Gillard, who was already sliding in the polls, it was sheer spitting hatred. In the Daily Mail/Miliband case, it has more purpose: Miliband and Labour are leading substantially in the polls, and the Tories are becoming increasingly desperate.

Mail editor-in-chief Paul Dacre is well known as a hysterical reactionary, and the idea that the Tories may be a one-term government is sending the Brit Right insane. The protest against the article — some of it from the Mail‘s core readership — was so great that the paper published a reply by Ed Miliband. In it he mentioned the inconvenient fact that the Daily Mail had been a fervent supporter of Hitler in the ’30s, and a fervent opponent of allowing Jewish refugees — like Ralph Miliband — into the country. The Mail then doubled down with an editorial, saying “we don’t apologise”.

A rational strategy? Of course not. But across the anglosphere, the Right are being run by their neuroses. It will be interesting to see how this manifests itself here. — Guy Rundle

Typo watch: punk business. From the Department of Maybe You Shouldn’t Have Sacked So Many Subbies. Page 26 of today’s Herald Sun: “Glecore bid buoys OZ”. That should be Glencore. As in Glencore Xstrata, not as in the genre of punk based on the film Glengarry Glen Ross. It’s not immediately clear why Oz Minerals gets a capital Z either. Things aren’t much better on page 41, where Funtastic is posting profits of $13.96 million, despite holding the Australian distribution rights to the surely stagnant “Lego stationary”. — Andrew Crook

Breaking Bad‘s finale: did it satisfy? For five seasons, Breaking Bad was something of a perpetual motion machine. Beginning with the almost innocuous premise of a beleaguered chemistry teacher turning to a life of crime, it quickly spun out into a cyclical, sickening morality tale. Touted far and wide as one of the greatest television series ever made, many see the last episode as some kind of stamp, the supposed seal on the envelope admitting it to the “pantheon”, as it’s so-called. Audiences and critics had already decided what Breaking Bad was; the show just had to decide how to be it.

This finale feels as neat as it needed to be. Breaking Bad works within certain parameters. The pilot showed us Walt as his most innocent, and “Ozymandias” showed him at his most despicably evil. The flash-forward sequence that pre-empted the fifth season’s premiere — Walt’s birthday, the retrieval of the ricin, the machine gun in the trunk — showed us all the tools and then, across the next 15 episodes, demonstrated how they would be put together. Where its network-mate Mad Men is beguiling and elegant, Breaking Bad tended more towards blunt and confronting. — Laurence Barber (read the full story at Wires & Lights)

Front page of the day. There’s just hours to go … 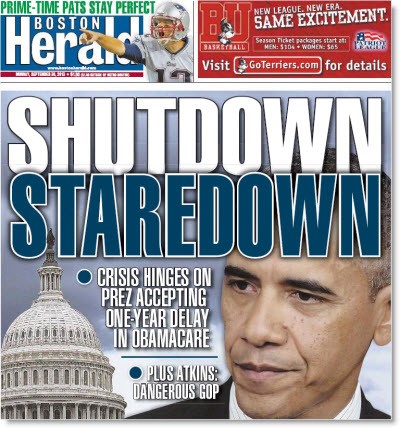 Don’t stop us Breaking Bad: why internet piracy is good for TV

Rundle: (Currently being reissued, you may soon be purchasing them for Senator George Brandis).

LOL – brilliant one liner Guy. If there was any justice in the world, we might be spared Brandis’ prolix pontifications in the future, but somehow, I doubt it.