At the Opera House, a Gillard curtain call to a cacophony of love

She hit out at the haters and a sell-out crowd went wild. Julia Gillard emerged from exile to talk to Anne Summers in front of a packed Sydney Opera House audience. Crikey was there. 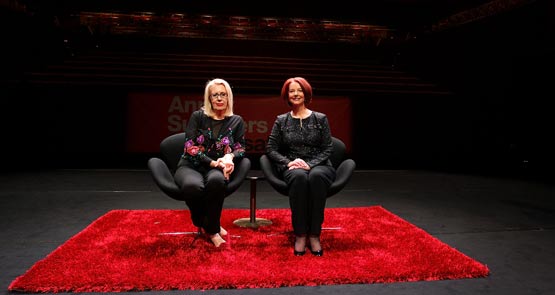 Before a sold-out crowd of 2600 true believers clamouring to cleanse the nation’s conscience of the sexism meted out to Australia’s first woman prime minister, Gillard barely managed to get a word in as waves of deafening applause, assisted by Jørn Utzon’s superb acoustics, seeped across the harbour on a magical spring evening.

It was like the former member for Lalor had never failed to communicate Labor’s successes to the Australian people, had never agitated to abandon carbon trading, weaken the mining tax and cut welfare for single mothers — that the party was never sleepwalking to disaster under her watch. None of that was more important than Gillard’s appalling treatment at the hands of misogynist nutjobs on the internet.

At the outset, MC Catriona was on hand to remind everyone that:

In a scene straight from the set of Oprah, Gillard strode on stage to the strains of Aretha Franklin’s version of Otis Redding’s Respect and the crowd went totally apeshit. At times she seemed embarrassed by the reaction that included a shout-out to the Altona fans in the house.

Lindsay Tanner’s long-term Melbourne University student union sparring partner, 52 on Sunday, had just returned from New York City with partner Tim Mathieson and seized the opportunity inside the first five minutes to sledge Australian Financial Review gossip columnist Joe Aston for penning an erroneous Woman’s Day pick-up last week claiming she and Tim were on the rocks. Aston, Gillard alleged, should have known when he called spokesperson Bruce Wolpe for comment it was 1am on the east coast and that she replied at the first available opportunity of 6am (8pm AEST) — too late for the Fin’s crushing deadline.

The “night of June 26” was repeatedly raised in hushed tones, Gillard explaining that the difference between her takedown of Kevin Rudd in 2010 and his revenge attack three years later was that “to ask your leader to have a leadership ballot that’s legitimate, to do things continuously that undermine the Labor Party and the Labor government then of course that shouldn’t be done by anyone.”

Summers: “So the difference is you asked for a ballot?”

Gillard: “The difference is every day that I was deputy prime Minister I spent all of my time doing everything I could to help the Labor government prosper.” [sustained hooting and applause]

“Maybe I’m just a starry-eyed optimist, but in some ways I actually think we are seeing the death throes of this kind of business model in the newspapers and we are going to emerge into a media landscape of trusted voices where it will be about trusted voices giving you the facts.”

Gillard was at her best when riffing about her suburban roots and the world of day-to-day beltway manoeuvring. She talked about how her brick veneer features on the official Hobsons Bay walking tour and “30 or 40 tourists” routinely turn up to take photos of the weeds in her front yard. And how every day in the Lodge she would pore over “the four newspapers you can get in Canberra early in the morning” (The Australian Financial Review, The Australian, The Sydney Morning Herald and The Daily Telegraph?) arranged by a staffer, Margaret, in order of positivity. She would then convene with Wayne Swan and Anthony Albanese at Parliament House to commiserate. Other anecdotes about calling Barack Obama “mad” for liking question time and revelations about Christopher Pyne’s spiteful niggling across the despatch box also played well.

Most of the questions from the floor were of the Lisa Simpson “why are you so popular?” variety. Like:

Question: “Tony Abbott is the new Minister for Women. What advice do you have for him?”

Answer: “I think the advice I would have for Prime Minister Abbott is to reach across the partisan divide and ask Tanya [Plibersek]!”

But that wasn’t really the point — the palpable legacy of the Gillard era is the huge boost it gave to young women who could see, on the TV news each night, a strong female leader in a position of power. Primary school-aged girls queued at the microphones last night to pay their respects. How’s this from 11-year-old Grace, the daughter of Global Mail journalist Bernie Lagan and Global Mail CEO Jane Nicholls:

Grace: “Throughout all that horrible sexism, is there anything you said to yourself to keep yourself motivated?”

Gillard: “When I was getting myself together to go out and give my final speech as prime minister I certainly did say to myself that I wouldn’t give those people the satisfaction of seeing me shed a tear, I wouldn’t do that.”

There was some harder probing over gay marriage (Gillard explained that her “perplexing” take was nothing to do with the views of western Sydney focus groups but a hangover from fighting the patriarchy as a student activist) and cuts to mental health funding (she would have to ask Nicola Roxon to check the detail).

Gillard anointed local Sydney MP Plibersek — “one of the most gifted communicators in Australian politics” — as her woman successor and declined to back either Bill Shorten or Anthony Albanese in the current leadership ballot. Whatever the outcome, Tanya should be the next female Labor leader, she said, whipping the home crowd into a rapture Peter Baldwin could’ve only dreamt about.

The State Circle celebrity sightings were a bit thin on the ground, with ex-Gillard staffers led by media consigliere Eamonn Fitzpatrick rocking up and newly engaged power couple Olivia Wirth and Paul Howes perched in the “Australian Workers Union row” alongside Swan (the event was sponsored by Wirth’s Qantas). Plibersek was to their right. Global Mail snapper Mike Bowers turned up, seemingly in a personal capacity. Retired Tasmanian senator Nick Sherry was apparently there but Crikey never properly eyeballed him.

Befitting her focus on the media, Gillard did find time to slip one scoop in — she will soon take up a position with the Brookings Institution as a senior fellow working on global education after her move to Adelaide in November, necessitating very frequent commutes to Washington (prompting the biggest applause of the night).

The red carpet will roll out again tonight in Melbourne at the Town Hall in Swanston Street. It is, of course, totally sold out.

‘I am not yet finished and I never will be’: how Anne Summers is still evolving

I knew history would judge Julia well, although I could never have predicted how quickly. IndeedAssociate Prof at Adelaide Uni, Brookings Institute advisor, roving ambassador and VIP guest on the world public speaking circuit (starting with sell out tours in Australia), Julia has MOVED on!!

She leaves behind diminished men and one narky Bishop, fighting over the spoils of a diminished prime ministership and polity. It must surely taste like ash because it certainly looks like that at the moment…

Yes, Gillard made mistakes which she readily admitted. However, she was under unrelenting and often unfair criticism during her tenure as PM. We’re all well aware of where JG might have done better. However, value of last night was to allow JG the woman – the first woman PM – to be seen and to respond in a way that was impossible as PM.

What a pleasant change it would have been if Crikey had given a woman journalist the job of commenting on Juiia’s interview. Maybe then we would have been able to avoid the mocking tone so characteristic of male journos{even those who write for Crikey)in their attitudes to our first woman Prime Minister.

Touché Brgid. Perhaps Crikey could provide (or commission) a woman journalist to cover round 2 at the Melb town hall tonight.

I think the Crikey journalist must have seen a different interview to me. His somewhat snide review just demonstrates to me that we really do have a long way to go.