Press gallery poachings. The Abbott government is raising some eyebrows by being slow in recruiting new staff — more than one minister still doesn’t have a media contact person. The press gallery usually provides fertile ground for media staff for new governments, and our spies tells us that key ministers have been “trawling the gallery for people in a pretty indiscriminate way”.

The Australian Financial Review‘s James Massola was offered $150,000-plus to shift to Joe Hockey’s office as a senior media strategist. Massola, famous for his sometimes-unkempt mop of hair, used to be with the Oz and before that The Canberra Times — he’s seen as having better contacts within Labor, so has done well to be headhunted by the Libs. There was a rumour that AFR editor Michael Stutchbury flew from Sydney to Canberra in a hurry to talk him out of the offer, but it seems the trip was pre-planned (Stutch took the Fin crew out to dinner to say thanks for their work on the election). At any rate, the dinner worked; Massola turned Hockey down. We hear at least two other Fairfax staff have been targetted by the Abbott government for poaching. If you know any names, drop Tips an anonymous line … and we can’t believe some senior writers at News Corp haven’t been tapped on the shoulder.

Rumour fail. We received an anonymous tip that Clive Palmer had made “a large cash donation” to a certain Greens Senator in the election campaign. This didn’t sound right to us; we asked the Senator’s media contact, who said their boss “has not received any donations from Clive Palmer or any associated person, company or group”. So who sent in the tip — a Liberal or Labor mole trying to make trouble for the Senator in question?

That hippie Rupert. Has Rupert Murdoch been smoking his peace pipe a bit too often? This is what he tweeted this morning …

He’s been ticking off some Republicans for their approach to passing the budget bills, but we’re not sure this tweet is on the same subject. Tips worked out that Rupert has recently met with DJ Will-i-am (here they are having a cuddle). Perhaps Mr Murdoch is getting into peace-and-love-themed hip hop?

IT woes. A mole reckons matters are not improving with the troubled rollout of a new ICT system at the New South Wales Education Department (it’s been over-budget and had its cost queried for a few years now. It uses SAP software). “Intended to rollout to all public schools as well as TAFE, the application of this system has continued to shrink over the five years of its implementation, but the costs have remained the same,” our insider claims.

Crikey winner. Tips has been running a comp for the first reader to guess who would be the first Coalition minister to stuff up. We were tempted to call it for Christopher Pyne, after he appeared to say the government would re-cap university places and scrap the compulsory student amenities fee — only to have Tony Abbott say that wasn’t going to happen. But we’ve decided to declare this result: George Brandis, for railing against perceived waste and dodginess by his opponents, then spending almost $1700 of taxpayers’ money going to radio shock jock Michael Smith’s wedding. Brandis, who is now the Attorney-General, paid the money back once the media got onto the story, although he maintains claiming the money was legit because his wedding attendance was “primarily for work-related purposes”. Sure, George.

We received many entries in this comp but only one of you named Brandis (a lot plumped for Barnaby Joyce, who also went to Smith’s wedding but appears to have claimed little or nothing on expenses). Our winner is therefore reader “VR” — send us an email and we’ll give you a book or DVD.

After the wedding, Smith said Brandis was “tearing up the dance floor”. Liberal insiders will be well-acquainted with Brandis’ office famed strength at karaoke (although we think the stars may have moved on lately). Seems it’s an all-singing, all-dancing kind of office chez Brandis.

PM&C relies on The Onion. Those wild cards at Prime Minister and Cabinet are running an official Facebook page for the G20 summit in Brisbane in November — and look whose articles they’re posting. 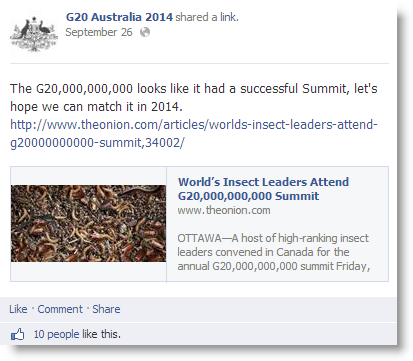 “Are we taking the G20 seriously?” our alert tipster asked. And watch out, over in the US the Pentagon has advised all its staff to report anyone seen reading The Onion as a potential security threat. Tips’ verdict is that if any public servant has the nous to make the deadly dull G20 interesting and fun, kudos to them.

After wisdom came senility and denial?
What a pity he had s little time to enjoy the first?

“The Far Cup” :- Is this some sort of record for the running of this event?
Even Howard had a couple of months before Prosser’s confliction couldn’t be held back behind Murdoch’s arras anymore.

“The Abbott government is raising some eyebrows by being slow in recruiting new staff — more than one minister still doesn’t have a media contact person. ” – why does a minister need a media contact when it’s all to go through Credlin?

Why do they need media-spin staff when they’ve got Murdoch?