Syria's use of sarin gas last month was not a diplomatic mistake -- it the culmination of six months of very clever strategising, writes Dara Conduit, a PhD student on Syria. 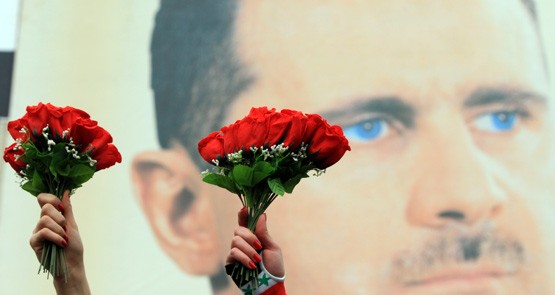 The recent Syrian chemical weapons agreement marked a strategic coup for Syria’s President Bashar al-Assad. While the deal was seen as a victory for international diplomacy, in reality it may represent a continuation of the six-month-long run of luck for the beleaguered leader.

Chemical weapons have not played a major role in Assad’s war effort. In fact, the international focus on chemical weapons has acted as a red herring in the face of the more than 100,000 casualties caused by conventional weapons. By September 2013, Assad’s chemical weapons were only of limited strategic value and had become a potential threat to the regime itself. Realistically, Assad could not have deployed the weapons decisively on the battlefield without risking international intervention, given that US President Barack Obama had earmarked their use as a “red line” that the US would not tolerate. Thus, even the limited deployment of sarin gas in Damascus in late August put Syria on the brink of international action.

Ever since it lost control of parts of Syria where chemical weapons are stored, the weapons have become a liability as the regime now faces the very real risk of chemical attack with its own weapons. As a result, it is very much in Assad’s interest to get the international community to destroy the chemical stockpiles, especially those in semi-controlled areas and with the UN footing the estimated $1 billion bill.

In return for his “sacrifice”, Assad has been welcomed back onto the international stage, becoming an indispensable partner in the disarmament process. This is no small feat, given the US had declared Assad was no longer the legitimate representative of the Syrian people. Now, the viability of the chemical disarmament process, which will likely take years to complete, rests on Assad remaining the Syrian President. This will likely limit Western governments’ backing of opposition groups whose disposition towards the chemical weapons is uncertain.

Moreover, the deal has taken the option of international intervention off the table, at least for now. As long as Assad maintains some commitment to disarmament, it will be difficult for Western governments to justify intervention to their war-weary citizens. Consequently, the Assad regime will likely never have to answer for using sarin, despite increasing evidence of its culpability. This has delivered a major coup for Assad, who has effectively called the West’s bluff on threats of intervention. As a result, Assad has turned a chemical weapons attack into a physical and diplomatic win, sacrificing little, but receiving much in return.

“While last year Assad’s fall seemed imminent, it now appears he will hold on to power for some time …”

Assad’s victories this year have extended well beyond the diplomatic arena. Assad also won key battles on the ground in the past six months, shoring up strongholds in southern and central Syria. His win in Qusair with the help of Hezbollah secured the regime’s supply routes between Damascus and the port of Tartus. This strengthened his grip on the capital and secured corridors to Lebanon, Aleppo and towns in the Alawite region, north-west of the country. It has also cut rebels off from Lebanese weapons smugglers and fighters that have crossed into Syria from Lebanon’s north. Coupled with further gains in the suburbs of Homs and in the Orontes Valley, Assad is now in control of more population centres and strategic posts, putting him in a far better position than earlier this year. With supply secured, and ongoing backing from Russia and Iran, Assad may be able to hold on to the reins of power for some time, although a decisive victory remains unlikely.

Additionally, the opposition remains divided and unable to provide a viable alternative to Assad. The latest iteration of the Western-backed, self-titled Syrian government-in-exile, the National Coalition for Syrian Revolutionary and Opposition Forces, suffered a major blow this week with the announcement of a new Islamist bloc inside Syria. The new bloc is made up of 13 key Islamist groups, including the al Qaeda-linked Jabhat al-Nusra, none of which recognise the National Coalition. Assad garners strength from this disunity and will likely see his not insignificant support base bolstered by the emergence of radical groups whose ideologies are anathema to much of the Syrian population.

Syria is therefore in a very different situation today than it was this time last year. While last year Assad’s fall seemed imminent, it now appears he will hold on to power for some time, particularly given that the West is unlikely to stand in his way. Furthermore, questions are emerging about whether the alternative to Assad would really be a force for peace in Syria. Overall, Assad will likely be pleased with recent developments that have bought him more time at the helm of Syria, and possibily even a slice of the post-war pie.

Crikey, you need to use better informed writers.

The continuing tensions between the various elements of the rebels, including firefights, suggests that soon the so-called FSA will be asking for western help against the fundis.
The Worm will finally be swallowing its own tail.

well, i suppose when nato bombs syria in a year or so we’ll see just how “successful” this so called “strategy” by assad really is

If it wasn’t for Assad’s refusal to bend over for the US and it’s allies.. he would be hailed a Hero instead of demonized. Poor bugger. Defending his country against terrorists on one hand, and defending his country from foreign intervention on the other.

The comments on this BS article are far more informative, Crikey should take heed.

In the Algerian War of the 1980’s/90’s the GIA (Groupe Islamique Armé) claimed they were a rebel group combating what they believed to be a fraudulent election. Blah, blah, blah – whatever. They were also sponsored by outside Western countries. Inevitably they, like all other Islamist “rebel groups” took the hard-line approach and eventually proclaimed itself to be the only legitimate opposition to the Military Regime. Sound familiar? They then went on murdering sprees against anyone who opposed them – friendlies, foes – anyone. It’s like a broken record. Quietly, but slowly, the sponsorship dried up and those sponsors changed their tunes, 180 degrees. Syria is no different, we simply will never learn. I am also highly intrigued by your statement “Consequently, the Assad regime will likely never have to answer for using sarin, despite increasing evidence of its culpability.” Please explain your personal enlightenment of this increasing evidence. As a PhD student one has to assume you have invested personal research into this. I, along with millions of others are keenly interested in what you have discovered. Hell, I believe even our very Intel Collection Agencies are standing by with baited breath. There is no available evidence to condemn al Assad for using CW in August however, there is factual evidence that he was previously blamed for a CW attack only to have that allegation publicly refuted by the UN investigators. The “rebels” it seems, turned out to be the culprits of that one. It’s interesting as it is bemusing that in any other conflict zone we label these Islamic thugs as insurgents or terrorists but since the Western elite need a proxy to progress their hideous corporate agenda in the ME, we’ll dilute it down and call them rebels. What a joke. And what a slap in the face to all those who have fought and died in the GWOT where those very same people are called terrorist/insurgents.

I recommend you deepen your research. You have just publicly announced your PhD’s integrity is in doubt.