In the ever-so-polite contest for the leadership of the Labor Party it gets difficult for the two combatants to say anything in public that differentiates them from the opponent.

Finding a point of leadership difference. In the ever-so-polite contest for the leadership of the Labor Party it gets difficult for the two combatants to say anything in public that differentiates them from the opponent. Perhaps in private conversations Anthony Albanese can raise with party branch members the need to break the control of the right-wing unions that Bill Shorten is backed by. When the press is around he feels constrained not to touch on this one major difference.

Shorten, for his part, is aware of this weakness as he tries to minimise the extent that he gets beaten in the rank-and-file ballot where his union support is more a hindrance than a help. He has to pretend that he favours the democratisation of Labor and at the weekend he sought to attract niche support from the lesbian, gay, bis-xual, transgender and inters-x members. What he did not explain is how he would reconcile his advocacy of affirmative action to broaden the background of Labor election candidates with a commitment to give members, not the party machine people, the job of selection.

Shorten gets shorter. Anthony Albanese is still the clear favourite on the Crikey Indicator to become Labor leader but the lead is less than it was a week ago. 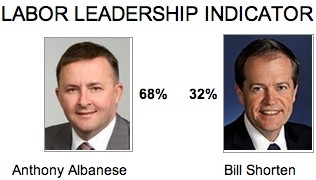 As for tomorrow’s interest rate decision, the market has the Reserve Bank making no change as a 95% chance. 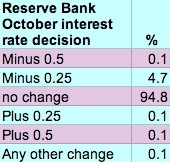 A warning for women drivers. Saudi Sheikh Saleh Bin Saad Al-Luhaydan, Private Attorney General and the Psychological Advisor of the Psychological Association in the Gulf states, has urged his countrywomen campaigning for the right to drive to think again. The Sheikh, responding to a planned protest demonstration on October 26 and a website petition on the subject, advised Saudi women to prioritise mind over heart. 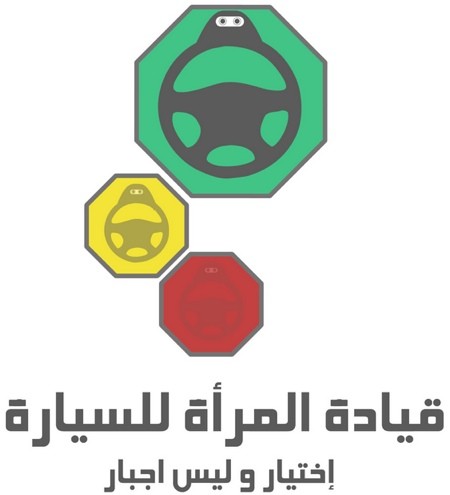 A declaration on the website has been signed by more than 11,000 women and states “since there are no clear justifications for the state to ban adult, capable women from driving. We call for enabling women to have driving tests and for issuing licenses for those who pass.” This prompted the Sheikh to tell the Arabic newspaper Sabq (as translated by Riyadh Connect) that the result of this is bad and they should wait and consider the disadvantages:

“Al-Luhaidan stated that in the days of Prophet Muhammad (Peace be upon him), muslim women who were his companions used to ride horses and camels as means of transportation but never rode alone and were always accompanied by a ‘mahram’. Al-Luhaidan further explained that there are exceptional cases that allow women to drive in Saudi Arabia such as when a husband is driving accompanied by his wife and daughter and an accident occurred. It is then allowed for women to drive due to the urgency of the situation. Al-Luhaidan added that driving could have a reverse physiological impact on women and could affect her ovaries and push the pelvis higher as a result of which their children are born with clinical disorders of varying degrees. He further stated that 33% female drivers caused car accidents in Arab countries as opposed to 9% male.”

The hypothesis gets the science money. Avoiding taking risks is a major factor in which scientists get research grants, according to a study by Case Western Reserve University philosophy Professor Chris Haufe. In his “Why do funding agencies favor hypothesis testing?” Haufe concludes that hypothesis-based research has the edge over discovery research.

Using the National Institutes of Health (NIH), he found that because hypothesis-testing research is driven by best practices (how to do and test science), it was easy for peer reviewers to separate good from bad science based on the research methods. Those with a realistic chance to prove what they set out to find, and with the biggest impact for the public’s benefit, tended to receive the federal research dollars. Exploratory research, however, is driven more by hope and chance of discovery and examines unknown areas with no or little-known theories to back them — perceived as a riskier bet. Haufe said the federal government, with limited funding, wants to support research where there’s a chance of success that serves both public and science interests.

Is that George Brandis receiving the mooncakes?

“He (Sheikh Al-Luhaidan) further stated that 33% female drivers caused car accidents in Arab countries as opposed to 9% male.”
The only conclusion is the Allah is responsible for the other 58%. Perhaps he should be permanently banned?