Business as usual for most markets as the US congress argues about the debt ceiling. 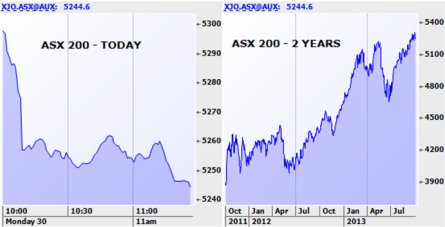 Economic numbers on Friday were mostly in line with expectations. The Michigan University consumer sentiment index came in at 77.5 slightly ahead of consensus (77.3) and up from last month’s reading of 76.8. They followed a week in which durable goods, initial jobless claims and pending home sales all came in better-than-expected.

European markets mostly down on Friday.

The US 10 year bond yield fell another two basis points to a yield of 2.625% as investors continue to favour defensive asset classes over cyclicals on concerns that the Fed decision not to taper implies that the US economic recovery has stalled.

The US dollar is close to a six-month low. The Aussie dollar closed at 93.15c and continues to hold above 93c.

Microsoft up 1.5% on talk that the Ford CEO will become its next CEO.

JCPenney down 13% after a capital raising at a 7.4% discount.