Financial SMAge? Fairfax writers have long jokingly referred to The Sydney Morning Herald and The Age as the SMAge for their increasing use of copy sharing. It appears we now witnessing the birth of The Australian Financial SMAge (not the catchiest title, we know). As Crikey has reported, the metro business sections are merging with […]

Financial SMAge? Fairfax writers have long jokingly referred to The Sydney Morning Herald and The Age as the SMAge for their increasing use of copy sharing. It appears we now witnessing the birth of The Australian Financial SMAge (not the catchiest title, we know). As Crikey has reported, the metro business sections are merging with The Australian Financial Review, with an announcement due any day now on how it’ll work. But integration is not just happening on the business pages.

Until recently, the Fin was housed in a separate division to the metro papers, the two camps jealously guarded their separate identities and they competed against each other ferociously. But over recent months, stories by Age reporters Nick McKenzie and Richard Baker have also been appearing in the Fin. Today’s Baker/McKenzie scoop on Saddam Hussein’s links to the RBA note-printing scandal stars on the AFR front page. What appeared to be a special deal was in fact a sign of things to come.

News stories by the Fin’s gossip columnist Joe Aston have been appearing on the SMH website over recent weeks and are now running in the dead tree edition. Aston’s story on a Sydney Opera House boardroom stoush is on the SMH front page today. The arrangement has pissed off some in the SMH, who see Aston as “persona non-grata” because of his previous attacks on SMH writers Andrew Hornery and Mike Carlton. And SMH star Kate McClymont’s byline featured in the Weekend AFR for the first time on Saturday.

While some hacks are chuffed about expanding their audience and perceived influence, others within Fairfax are worried the papers will lose their points of difference if the trend continues. — Matthew Knott

Does Mark Day read his paper? In today’s Australian, media writer Mark Day calls on the media to protest against the Coalition’s asylum seeker information blackout. Day writes he:

“… anticipated a thundering leader [aka editorial] from this newspaper, which has, in my view, distinguished itself over a long period in its fight for the public’s right to know … So far The Australian has not commented on the subject in its leaders but it has already demonstrated another point about Morrison’s plan to make us forget about asylum-seekers by silencing news of them — and that is it won’t work.” 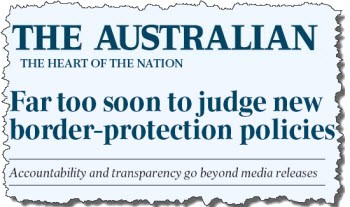 The only problem is the Oz did comment on the blackout in a leader last Monday, arguing it was “sensible and reasonable” to withhold judgement on the policy. Hardly the thundering outrage Day was hoping for. It makes you wonder how closely Day — or, indeed, the paper’s editors and subeditors — read their paper’s editorials. — Matthew Knott

Grand Final ratings: they need the Swans. If it wasn’t apparent to the AFL before the Grand Final, it should now be crystal clear: to get a big national audience, the Sydney Swans need to be in the game on the last Saturday in September. A total of 3.631 million people on average watched Hawthorn defeat Fremantle — 10% down on the 4.081 million who watched the Hawks lose to the Swans last year. In fact, it was the lowest audience nationally for several years.

And next Sunday’s rugby league Grand Final will struggle to top previous highs because a team from Queensland isn’t in the game. The TV audience in Sydney and regional New South Wales will be very high, but the audiences in Brisbane and regional Queensland (which is a huge market) won’t be all that interested and will be lower than they would have been. — Glenn Dyer

New US TV: good, bad and ugly. There’s a bounty of new TV on the airwaves lately with the start of the Fall season in the US. Over the next week, Crikey blog Wires & Lights will let you know what is and isn’t worth a watch in the new crop. First up, we highly recommend the return of Scandal, and look at Marvel’s Agents of SHIELD, Homeland’s premiere, Masters of S-x, The Blacklist, and Sleepy Hollow. — Laurence Barber (read the full story at Wires & Lights)

Video of the day. So inspired was Channel Nine’s Brisbane newsroom by the opening credits of HBO drama The Newsroom they made their own promo in the same style. Aaron Sorkin would be proud …

Front page of the day. Prime Minister Tony Abbott is coming to town, but he couldn’t crack the front page of The Jakarta Post … 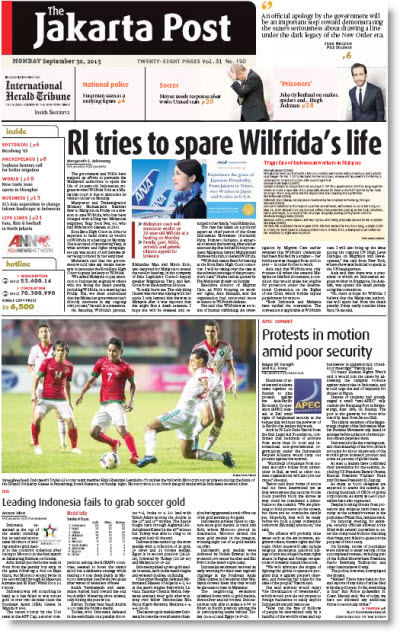 Still, Post readers are lucky to have the insight of The Australian‘s foreign editor Greg Sheridan, who features on page two with the good news Abbott comes to Indonesia “full of goodwill” …

How does Sheridan get away with being so blatantly pro Jakarta and why does every journalist who works in Jakarta forget all objectivity, close their eyes to abuses and atrocities and pretend that Indonesia is a nice, lovely country.

Day works away in the Mind’s of Murdoch, but doesn’t read his own paper? So he does have some taste then?
He’s joined a growing band.