Why less is more for Tony Abbott — and all PMs

Tony Abbott's decision to ration his and his government's media exposure is unlikely to work, but it's a welcome attempt to break free from the frenetic media cycle and get on with governing. 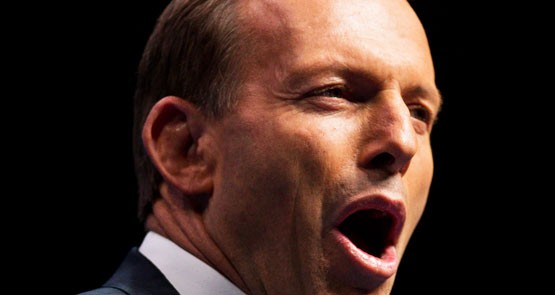 The Abbott government’s emerging aversion to transparency, and its command-and-control model for ministerial media management, will cause more, not fewer, media problems. But as unlikely as it is to work, its bold experiment in returning to the 1970s in terms of reducing the exposure of the prime minister and politics generally should be welcomed.

The 1970s reference isn’t meant as a jab, but as an allusion to the last prime minister who publicly yearned for politics to be off the front pages, Malcolm Fraser. Fraser, as much as he would hate the comparison, was the Tony Abbott of his time, a man who came to the prime ministership after a period of political turmoil and who was hated with an extraordinary passion by the Left. During the course of a prime ministership that turned out to be less reformist, but more progressive, than most expected, Fraser actually expressed the desire that politics receive less attention in the media.

That was when the media cycle, to the extent that there even was a media cycle, moved with the comparative gentility of an Edwardian picnic.

But Abbott’s effort to reduce both his own and his government’s appearances in the media (some programs that rely on a steady flow of ministers are already complaining) isn’t merely an exercise in nostalgia for an analog media era. One of the few universally agreed outcomes of the Rudd government was that its obsession with managing the media cycle 1) failed and 2) made a problematic prime ministership even more dysfunctional. Kevin Rudd, a man who obsessed over the wording of a speech to his department’s Christmas party, was the last person who should have been allowed to try to control a media cycle.

Former Labor frontbencher Lindsay Tanner left politics and wrote an entire book about the toxic interaction of the media and politics which had, he argued, dumbed us all down. Many called for Julia Gillard to adopt a “less is more” approach to her prime ministerial personality, doing less media and being seen less rather than, it seemed, appearing in a school playground every other day.

It’s thus a little ironic that when Abbott tries to do exactly that, to pull back from the media cycle and break free from government-by-announceables in favour of getting on with governing, he gets accused by opponents of hiding from scrutiny. It’s a charge they would never have made if Gillard had pulled back to a weekly media appearance.

“An approach that deliberately provides less content … simply creates more room for other content, which the opposition and other government critics will happily fill.”

Abbott rationing himself perhaps also recognises that the man himself isn’t overly popular with voters; he begins his prime ministership with the “achievement” of finally scoring a net positive approval rating, something he never managed as opposition leader. Being less on public display, being more aloof, is unlikely to exacerbate that unpopularity, if nothing else. Moreover, judging by his comments yesterday on the economy, every time he opens his mouth on that subject you get the impression a five-year-old is running the country. When it comes to economic commentary from Abbott, less is most definitely more.

The media cycle, alas, is no longer the easily controlled beast of the 1970s, or even of 2007 when the Coalition was last in power. Immigration Minister Scott Morrison is discovering this as constant news of boat arrivals emerges regardless of his efforts to keep them secret, even if The Daily Telegraph now hides its stories on boat arrivals deep inside the paper. There are now two 24-hour news channels; issues erupt on (and disappear from) social media within hours, creating multiple media cycles within one day.

An approach that deliberately provides less content, and establishes a bureaucratic process for determining who will respond to media requests, simply creates more room for other content, which the opposition and other government critics will happily fill. Abbott knows this perfectly well: one of the reasons Gillard could never pull back from the media cycle was that he would happily fill it if she didn’t.

It thus provides an opportunity for Labor, if they’re smart enough to do it. Like Bob Carr did as opposition leader and Abbott did, Labor should use the space to let a thousand scare campaigns bloom; the ones that don’t get traction will be forgotten; the ones that do will force a response from the government. That assumes, of course, that Labor has the capacity to prosecute an effective campaign, which judging by their performance in government is no given.

The other risk is that, if Abbott is successful at withdrawing from the media cycle, it will do nothing to reverse the growing disengagement from politics of a significant chunk of the electorate, particularly young people. Labor at least is trying to re-engage with its own base, a process that may eventually lead to a greater capacity to engage with the wider electorate, perhaps using social media to reach the disengaged. If the Liberals are smart, they’ll couple a rationing strategy with looking at ways they can reach disaffected sections of the electorate. Whichever party works out how to reach those voters — assuming they can be reached — stands to potentially benefit significantly.

Abbott will have more success in controling the media cycle and slowing it down because he won’t have News Ltd pushing the pace and filling any void.
The other “advantage” Abbott has is that he has no real policy agenda – the ALP had to push the media cycle to a certain extent because they wanted to get things achieved, education reform, health care reform, NDIS, NBN, a carbon price, a mining tax all these things needed to be “sold” – Abbott doesn’t have anything he wants to do other than ripping up everytihng the previous govt has done.

A little ironic, Bernard? You’re clutching at straws there mate.
Many of us wished Gillard would shut up for a couple of weeks last year just to see what would happen. Given that Labor had tried constantly to bend the media to it’s will and failed at every turn. It would have been nice to let the opposition cast it’s b.s. to the wind rather than watch Labor’s hapless ministers trying to deflect it.
Controlling the media message by not talking to the media might work when Parliament is not sitting but there are at least a few sweeks before chrustmes, at which time there’ll be nowhere to hide. Especially if Labor can use question time to actually ask questions about policy and governance rather than treat it as a sideshow.

mattsui – Abbott’s opposition cast it’s BS to the wind constantly, where it was lapped up eagerly by the News Ltd press which then framed the story and lead the rest of the media around by the nose.

Labor should take every comment of the Governments that varies even a millimetre from what the LNP said before the election and yell like hell about the LIE that Abbott has told. It is inevitable that some policies or promises made by Abbott will change and Labor has to be just as destructive as Abbott was in using this against the Government. Abbott was very good (and he had the media behind him to push the point) at keeping Labor on the back foot, and he did not care that he looked like a prat all the time with his chanted mantras. It will be most satisfying to see this happen, and the same goes for his ministers as well. This is not about the good governence of Australia (Abbott never gave a damn about that), it is about pay back.

Hopefully the Canberra Press Galler will be broken up and they will rotate better people in there that are balanced.