Changes at Australian Jewish News ... News Corp could look closer to home on piracy ... who will fill ABC radio gap? ...

Changes at Australian Jewish News. A tipster told us there had been a “change of senior management at Australian Jewish News”, which runs weekly print editions and a website. Unsure about calling on the Jewish rest day of shabbat (until we worked out that starts at sundown Friday), we put the tip to a company spokesman. It’s true; former group general manager Peter Matthews has left the company. Rod Kenning has been promoted from operations manager to GM. Joshua Levi, who was the senior journalist in the Sydney office, has been made manager of that office. The changes were decided upon at 10am yesterday.

Now, why is it that some managers at Foxtel (half-owned by News Corp) and at a Foxtel subsidiary seem to have signed up to a prominent US site that offers pirated TV shows? One of them lists Breaking Bad among his faves. So he’d be one of the 16%, then? We name no names …

ABC gossip. There’s some musical chairs at the ABC, with Annabel Crabb to fill in for Leigh Sales as 7.30 chief next month (it’s not yet clear who’s filling in for Sales when she goes on maternity leave next year) and Chris Uhlmann leaving the show. Respected chief political reporter for ABC radio current affairs Sabra Lane will take Uhlmann’s gig. An update from within Aunty …

“Still no word on who will replace Sabra Lane at radio current affairs at ABC. But its been a big week for Martin Cuddihy filling in in Kenya just as he applies for a full-time job in Bangkok. Peter Lloyd is scoring big accolades in a presenting role in The World Today and PM so there may be a role for him front of mike …”

We checked in with ABC HQ, who told us Lane would start at 7.30 “in the next couple of weeks. Her ongoing replacement in radio current affairs has not yet been decided.” The ABC confirmed Cuddihy was filling in temporarily in Kenya. Thrown into the deep end with the Nairobi siege, Cuddihy has impressed with his calm, informed reporting while tanks rolled past and bullets whistled not far away. You might have seen Cuddihy as 7.30’s Tasmanian reporter, then heard him at AM and PM. One to watch?

Katter pings Bieber. Any day that we see a Bob Katter-themed meme is a good day (yes, that’s really him). According to Katter, he saw the meme and asked “has this gone feral?” His staffer replied “don’t you mean viral?” 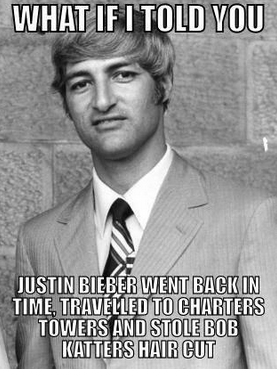 Giddings has bumpy flight. Nervous fliers might feel some sympathy for Tasmanian Premier Lara Giddings, who had an interesting landing on a flight this morning. At least she wasn’t on the notorious flight into Melaleuca (* loses breakfast). 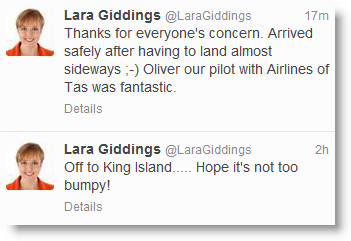 Women at the top. This anecdote, written by Liberal Party member Sandra Brewer in our sister publication Women’s Agenda today, might ring true to some other Liberal women. Brewer is writing on why there are so few women among senior Liberals:

“I attended a divisional meeting and met a state president of the party. I happened to be standing next to another chap who was attending his very first Liberal Party meeting. The state president, making small talk, asked me, ‘do you have any children?’ I told him about my three children and we shared anecdotes about the rascally escapades of boys. He turned to the chap [next to me], and asked him what he did for work. The conversation moved to business, then public policy, and the current issues of the day. Despite my long career in the Liberal Party as a branch president, divisional committee member, chair of a state campaign and my own career as a business owner, the state president likely left with an impression of me as nice mum and of the newbie chap as an interesting business man.”

Of course, there are also women who have felt patronised or ignored at ALP meetings because of their gender — but perhaps this is a thing of the past? If you have first-hand experience of whether a political party embraces its female members, send us an email.

AFL tough love. Is the 3AW rumour correct that a senior AFL journo has been refused media accreditation for tomorrow’s grand final (go Hawks) because he got certain people’s hackles up for his reporting on ASADA’s investigation into the Bombers?

Species excitement. Tips was thrilled yesterday to unveil a new species of vine-like shrub in Queensland (we have tentatively named the tuckeroo-like plant the Cupaniopsis crikeyacea). Another reader has rather burst our bubble by pointing out that about 50 new species are discovered in Queensland each year (new species last year included a bladderwort and a croton).

However, another reader praised our research, “As far as I know, Crikey has managed to uncover two new species. Tuckeroo I’m very familiar with but a Queensland ‘science department’? Whatever will the Newman government come up with next?”

(Go Hawks eh tips?)
May you never do lunch in this town again.
Go lie with the fishes next to Kennett. LOL

Oh! no, not more Annabelle Crabb? She must be the most over-exposed person on TV. If she was any good at half of the things she does, it wouldn’t be so bad. All I’ve seen is a blatantly biased, Coalition supporter, who makes comments about issues she knows nothing about!
Perhaps you should stick to the cooking, Annabelle!!

The sooner Crabb sticks to one or the other, the better. She can’t make up he mind between comedy or commentary – so she falls into the pot between.
This is just more ABC “We’ll show the customer who’s boss”.
Like so much of the “light entertainment” they’ve persevered with in recent years from under some sort of weird, self-flagellating “Newmanesque production values” – as life support for the otherwise terminal.
Their standards are like the pants on that drunk that mooned Heather Ewart on election night – at half-mast.