The Dow Jones is up for the first time in five sessions, as our local market stays steady. 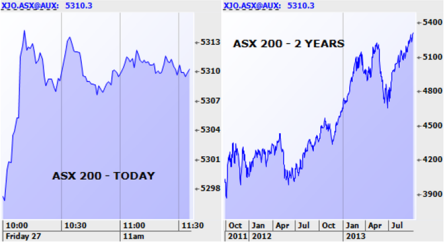 Debt ceiling negotiations continue to be the focus. We seem to have moved on from the tapering debate, or have at least been distracted from it. No concessions on either side of the debt ceiling debate overnight.

One Fed Governor Kocherlakota said overnight that the Fed must “do whatever it takes” including increasing stimulus in order to get unemployment down. He seems to have stolen the line from Mario Draghi who has promised the same thing for the Eurozone.

Weekly jobless numbers got over their computer glitch affectation and came in better than expected at 305,000 jobless claims against expectations for 325,000.

BHP and RIO up 0.31% and 0.62% in the US overnight but thanks to the currency BHP is down 16c equivalent on the close here last night.

Metal prices mostly down but not by a lot.

European markets mixed and nothing moved much.

The US 10 year bond yield fell yet again (bonds up) a further sign that the bond market is doubting the US economic recovery, anticipating a lower level of tapering than previously expected and that investors are favouring defensive “risk off” asset classes over cyclicals and growth.

Pending home sales were down 1.6% but came in ahead of the consensus for a 2.3% fall.

The third estimate of second quarter GDP came in at +2.5% unchanged from the second estimate but below the consensus for a revision to +2.6% — the Fed are looking for an improvement in jobs and the housing market to trigger tapering.