The Daily Telegraph can't identify a man charged with child pornography -- but it did include a photograph of him. Although his face was blurred, it didn't take long to find the original on a government website.

AFR calls Gillard breakup. Australian Financial Review gossip hound Joe Aston was asking questions today about the “strange silence on Gillard status”. Citing that reputable source Woman’s Day, Aston repeated the mag’s claim that Julia Gillard and her partner, Tim Mathieson, haven’t been seen together publicly since June. Aston asked why other media have not followed this big story and concluded with “Julia Gillard’s spokesman Bruce Wolpe didn’t respond to our enquiries on Thursday …”. Around 9am today the piece was updated online with this:

Glad we cleared that one up…

Cannot be identified? The Daily Telegraph has a page-two article today about an Australian military official who has been charged with possessing and producing child pornography. Although the newspaper says the official, who is attached to the Australian embassy in Jakarta, “cannot be named for legal reasons”, the Tele includes a 2012 photograph of a group of Australian officials, with the charged man’s face blurred out.

The photograph includes then-ministers Stephen Smith and Jason Clare, and after five minutes of googling Crikey was able to locate the original, undoctored image on an official government website. All of the men pictured are named on the government website. In this age of facial recognition software and the internet’s long memory, is it enough to blur someone’s face, when anyone with a computer can find out his name? — Cassidy Knowlton

Delating typos. The Sydney Morning Herald had an amusing typo on its website this morning, on a story on mistakes and computers. The subs caught it and fixed the typo quickly, but not before we got a screengrab. Of course these things happen all the time to the best of us; we just like the irony of the subject matter.

Video of the day. US Republican Senator Ted Cruz does not like green eggs and ham — or universal healthcare. Cruz held an epic 21-hour filibuster in the Senate to prevent a vote that would strip an amendment to defund Obamacare from a bill on the federal budget. Cruz ran out of things to hate about Obamacare, and read from Dr Seuss books and other materials during his long hours on his feet.

Front page of the day. It’s a veritable sea of purple on the front page of The West Australian today ahead of tomorrow’s grand final. 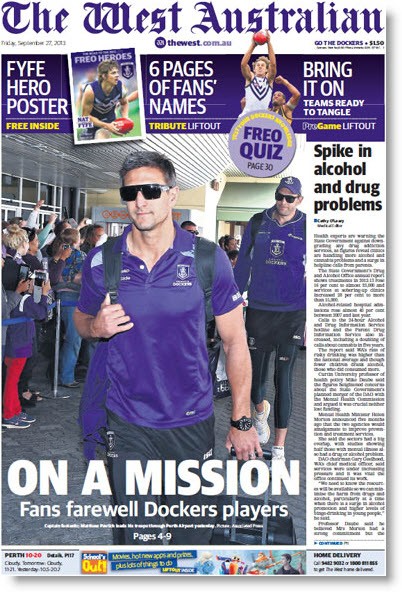 While no fan of the US Filibuster system, when used by either party, I feel it incumbent to point out that the reason he read Dr Seuss’ classic ‘Green Eggs and Ham’ was that he was unable to be home for his two young girls bed time and was, through the live broadcasting of his speech on C-Span, able to read them a bedtime story at the appointed time.

Can’t fault a father who takes his parental responsibilities seriously.

Re. Cruz – it wasn’t a filibuster in the formal sense – it was a stunt. He also could have spoken longer, but gave priority to an interview appointment with… Rush Limbaugh.