There's some piggy drama in Denmark, with daycare centres banning porcine products out of sensitivity to the religious beliefs of their charges. Plus other political snippets noted along the way.

The politics of pork. Pork is to Denmark what lamb is to Australia. Pigs out number people two to one in the Nordic nation, which exports close to $6 billion in pig meat a year. A day rarely passes without a traditional Danish family eating a porcine cut or two, and preserving the culinary place of the pig has emerged this northern summer as a major political issue.

The politics of pork emerged in July when the tabloid Ekstra Bladet published this story: 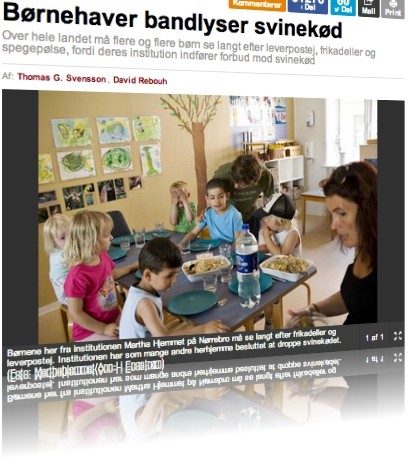 “Pre-schools banish pork” the headline proclaimed above the news that the paper’s survey of public institutions had found that “at least 30” daycare centres had dropped pork from their menus so that children from different ethnic and religious backgrounds (primarily Muslim) would not have to queue up in different lunch lines. Comments critical of the ban came thick and fast, reaching 844, so, like tabloids everywhere during their traditional summer silly season, Ekstra Bladet decided to take the beat-up of the scandalous menu dropping further. A major hospital near Copenhagen, it revealed, had been serving — and continues to serve — only halal meat to patients (something it has been doing for “practical and economic reasons” for years now, according to the hospital’s website). That one netted 1047 comments.

Let the correspondent for US National Public Radio continue the story:

“Helle Thorning-Schmidt, who leads the country’s center-left government, eventually joined the fray, insisting that Danish tradition should not be abandoned in public institutions, and that perhaps halal meat should be labeled as such, presumably so that qualmish Danes can avoid it. That proposition seems unlikely to go far, however, since labeling issues inevitably involve the 28-headed monster that is the European Union. …

“But there is no question that this fight over what should fill children’s plates has unearthed tensions buried (admittedly) not much deeper than Danish potatoes. The world became witness to the Danes’ struggle with multiculturalism in 2005, when one newspaper insulted Islamic tradition (and caused riots) by publishing cartoons of Muhammad. Clearly, the issue of Muslim accommodation continues to simmer, and at least one political party is hoping to use that to its advantage.

“The far-right Danish People’s Party has emerged from the whole summer meatball mess with a tidy boost in the polls, and is likely to make special treatment of religious minorities a major theme in the upcoming municipal elections, to be held on Nov. 19.”

An Australian tabloid view. It has not taken a slow summer spell in the news cycle for our own Murdoch tabloids to kick along a little anti-Muslim sentiment in Australia. Andrew Bolt was at it this morning.

Demands it? I suppose on that logic we should stop letting anyone Irish into the country, too. There are some of them in our jails, and back in their homeland there’s that Irish Republican Army business, which must make them all a dangerous risk.

It’s not that easy being green. With that drop in the vote and all there must be a few of those resigning Green staff members singing Kermit’s Song to the retired party leader Bob Brown

For Christine Milne these words of wisdom probably are more appropriate:

I’m not too sure it’s a good idea letting the likes of Blot and his sponsors dictate what constitutes “terrorism”?
With the way he uses his editor protected position to stir the sort of base emotions he likes to play with?
They’ll gnash their hands and wring their teeth, crying out about freedom of speech and try to truncate anyone else’s that disagrees with them?

It’s true it’s not easy being green – screen that is. These Medion LED screens are not much chop after only a year. A definite squeamish green tinge. It’s a portent I tell yer.