Our local market stays buoyant, while the US government argues over raising the debt ceiling before the money runs out. 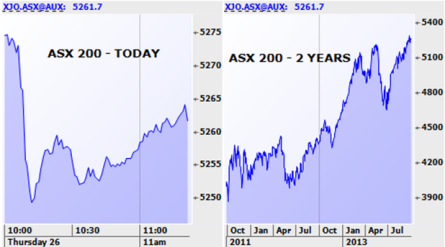 The market is down 15 points.It is option expiry today. That tends to lead to unusually large volumes without much price impact.

Our market surprisingly strong yesterday with the ASX 200 up 42 despite a 67 point fall in the Dow Jones the night before. It makes us a bit more vulnerable today than the Futures might suggest.

Gold stocks up in the US as the Gold price rebounds $19.90, up for only the eighth time in 23 sessions. The 4.72% rise last Thursday had been completely lost again at the lows yesterday.

Metal prices mostly down — nothing notable.

The A$ has stabilised in the mid 93c zone — 93.64c this morning. The recent rise has put pressure on the RBA to cut rates again in October.

Bonds up again in the US (yields down). They have only fallen twice in the last 14 sessions suggesting the market thinks the US economy is weakening and that investors are moving to defensive “risk off” rather than “risk on”’ asset classes.

The iron ore price has had another good rise overnight, up $1.10. The price is holding over $130 despite brokers predicting falls to $80 earlier this year and despite one forecasting a fall to $115 yesterday. Not much movement on European markets.