A Current Affair has found a group of outraged ratepayers -- but it turns out they have some less-than-orthodox ideas.

Ratepayers’ hidden agenda. At first glance, the story that aired on Monday night seems like a fairly standard report from A Current Affair about a fairly standard state of affairs: ratepayers who aren’t happy with their local council. Are they ever? Melton City Council meetings have apparently been playing out like a soap opera, and ACA has identified the main players as a mayor accused (and cleared) of bribery, alleged councillor infighting (quelle horreur!) and a group of residents who, according to ACA, “just want to be heard” … 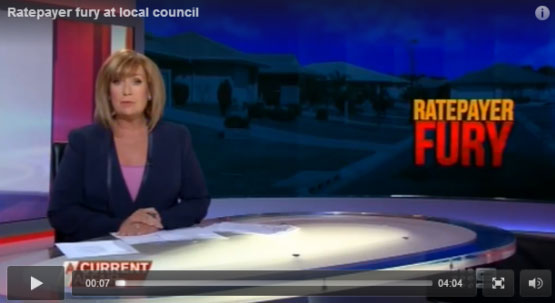 What ACA fails to mention is that a number of these residents are adherents to a fringe ideology known as the Sovereign Citizen Movement, and their true concerns extend well beyond council infighting to the illegitimacy of all local, state and federal government law, as well as the threat of a hidden One World Government. So just a bit different then.

Leading the charge against Melton City Council is resident and mother Rena Illiades. In the report, she softly explains in a sentence that ACA didn’t feel needed an ending: “These people are upset, they’re genuinely upset, and when they’re not getting the answers.” On a Sovereign Citizen podcast, The Repurposing, however, she explains that she doesn’t believe in local councils at all, although she notes that she also doesn’t believe in Santa Claus but still puts a Christmas tree out come December. Also featured on the report is property owner Sam Ganci, being dragged from the council meeting by police after having “lost his cool”. On Facebook, Ganci rails against United Nations conspiracies, Fabians and the corrupt legal system.

Two Victorian Sovereign Citizens have been sectioned under the Mental Health Act in the past fortnight. According to their supporters, a group that includes Illiades and Ganci, they had been doing nothing more than filing liens against law enforcement officers and informing people of their rights. The Sovereign Citizens have long been considered an occasional annoyance by police for refusing to comply with orders and filing reams of non-binding legalistic documents — so-called “paper terrorism” — but local law enforcement may be beginning to take the Sovereign Citizen Movement more seriously after the arrest of two Las Vegas adherents for allegedly planning to kidnap, “try” and execute police officers. — Cam Smith

Cater misses boat on Flannery. Curse of the paper deadline, again. In yesterday’s Australian, Nick Cater began an article — which, like all Cater articles looks like a set of offcuts of other Cater articles — with this lead:

“WELL, that was easy. The climate tsar is deposed on Thursday, and by the weekend everyone has forgotten about it.”

Well, they had — until Monday, when Tim Flannery announced that the Climate Commission would continue on a voluntary basis. As reported on Tuesday on page one of, erm, The Australian, wherein the latest half-yard of Cater can be found. Damn you, liberal elites. — Guy Rundle

We think they mean cited. Anyone sighted a good subeditor lately? — Glenn Dyer

Bat-man returns in the Tele. Just when we thought the Daily Tele was through with weird photoshops (they have been light on in recent weeks; perhaps the Abbott government doesn’t provide as much grist for the digital mischief mill than the Rudd government?), the front page today carries a story about plans to divert the Pacific Highway upgrade to avoid destroying a colony of endangered bats. In addition to the over-the-top anti-environmental language (“after learning this newspaper was set to expose the farce last night, Premier Barry O’Farrell immediately … requested an urgent meeting with Prime Minister Tony Abbott to discuss slashing the federal green tape that is holding up the project and potentially costing lives …”), the story is illustrated with a picture of NSW Premier Barry O’Farrell as a bat …

They’re lovin’ it at Ten. Channel Ten is putting the breakfast into breakfast TV. Australia’s smallest McDonald’s will be set up in the studio of Wake Up, Ten’s new breakfast show, to serve up hash browns and Egg McMuffins to presenters and crew. Will hosts Natarsha Belling, James Mathison and Natasha Exelby be hoeing into frappes and hotcakes on air? The press release contains a lot of jargon about an “on-air, digital and social eco-system”, but news presenter Nuala Hafner will miss out — she’ll be broadcasting from Melbourne’s Fed Square.

Savvy stuff from Bully boffins. This appeared in the Townsville Bulletin‘s Savvy section, as part of “The Thursday Biff with CK & Blake from 106.3 FM”. CK may need to put away the D-pad and pick up a math book — and a grammar guide …

Video of the day. Remember when Bob Hawke told Australia, “any boss who sacks anyone for not turning up today is a bum”? It’s 30 years to the day …

Thirty years on and I am still not as happy as I was back then. It must be me! Edward James