Senior Greens staffers have slammed reportage of an internal crack-up in Christine Milne's office as a media beat-up. 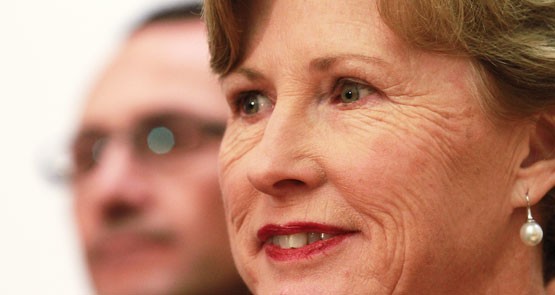 Oquist sent a text message to national media yesterday claiming “fundamental differences of opinion on strategy” had driven him from his office, before jetting to Germany on a two-and-a-half-week taxpayer-funded “individual study tour”. He served for years as Brown’s fixer and close confidante and helped set up the Australian Greens in the 1990s.

Six Greens staffers — Oquist, climate change adviser Oliver “Ol” Woldring (a long-time staffer who has two young children and cites exhaustion for leaving), policy director Clare Ozich (who has been on staff for seven years and flagged her departure before the election), economics adviser John Hawkins, communications director Georgie Klug (who wants to head back to Sydney to be with her fiance), young gun adviser Josh Wyndham-Kidd — have all decided to leave.

The ructions have rocked the morning media cycle after they aired on last night’s Lateline, with Greens Deputy Leader Adam Bandt and former Milne communications director Tim Hollo taking to the airwaves to defend the party from coverage suggesting the Tasmanian Senator would somehow soon be toppled as leader.

A Greens MP told Crikey this morning the situation had more to do with Oquist’s previous role in Brown’s shadow.

“He’s been there since back in the day when he was a young whippersnapper. When it was just Bob [in Federal Parliament] it was just Bob and Ben. And it just stayed that way. When Christine came in and said there was going to be less focus on her and more on the team, and she was very genuine about that. Bob was like one of those crazy nuclear submarine captains who just calls drills at random moments to scare the shit out of everybody and keep us on our toes. Christine’s much more collaborative. Bob just did it all on raw instinct, minute by minute … with Ben, of course.”

A Milne edict to let the winds of democracy whip through her 16-strong office spread the decision-making process across numerous key staffers and took responsibility away from Oquist who, staffers say, operated as an information funnel.

A former senior Greens staffer told Crikey this morning that the decision for Oquist to go to the media was “incredibly disloyal to the leader and the party”.

“Ben never made the transition from Bob to Christine very comfortably and easily,” they said. “He is a loss to the party because of the skills as a political operative. He’s the best we’ve got in the party. But he had a incredibly close relationship with Bob. And he was effectively the gatekeeper to Bob. He held an awesome amount of power. Christine would not have a bar of that kind of behaviour. And she has and continues to have a much more open office. She has a much more consultative leadership style. And Ben never handled that very well.”

It’s not unusual — under internal Greens party rules, a spill of all leadership positions occurs after each election. At that point staffers are technically relieved of their duties and under the Members of Parliament (Staff) Act have four weeks to access a redundancy. Those who decide to stay are then offered new contracts. In 2010 around eight Greens leaders’ staff decided to up sticks — two more than this time.

And it is likely some might have ended up forcibly losing their gigs anyway. Buried in Treasurer Joe Hockey’s “costings” paper released two days prior to the election was a small clause stating that personal staff would be reduced to 2010 levels as a cost-saving measure. In 2010 the Gillard government struck a deal with the independents and the Greens that resulted in four extra staff in Brown’s office. There are currently 18 Greens staff allocated to the leaders, with two working for Bandt.

The demands on staffers are well known, with many paid a loading in lieu of the countless overtime each is expected to work, which begins with Radio National at 6am and ends with “What the Papers Say” well after 11pm on ABC Local Radio.

Hollo, who left the office in February and is setting up an NGO called Green Music Australia, told Crikey that, in fact, Milne’s staff were incredibly loyal. “Christine inspires incredible loyalty in her staff, and you only have to look at the fact that at the time she became leader, of her six then-staff, four of them had been with her for more than five years. To last that long in a political office demonstrates incredible support and loyalty for the MP you work for and shows how fantastic it was to work for Christine. I loved working for Christine, and I know that the vast majority of her staff do as well. She’s an amazingly good boss and an incredibly inspiring person to work for.”

Milne has not traditionally operated with a chief of staff during her federal career, and it is possible Oquist might not be replaced. Attempts by Crikey to reach him this morning failed.

UPDATE 5:55pm. Oquist responds from Heathrow: “Just touched down in london on way to see german greens and then holiday. Back mid nov. Planning very much to keep doing things with the Greens while pursuing business, community and environment opportunities. I remain on very good terms with the team.”

Thankyou Andrew for your comprehensive analysis. All major media outlets including the ABC are covering this issue as if there are questions around Christine’s leadership.

Too much of our popular media seems more concentrated on self-gratification than serving the greater public’s education.

They are all MPs JH, senators and one in the reps. And then there are the state MPs as well.

Love the update from Heathrow – first ‘opportunity’ of the three he might be pursuing is ‘business’.