Who is the best-paid media CEO in the land? And when you compare it to the size and performance of the operations, do they really earn it? Crikey investigates.

ABC managing director Mark Scott may oversee more journalists than anyone else in the country, but he’s far from our best-paid media boss. Scott’s pay packet is dwarfed by that of his best-paid counterparts in the private sector, a Crikey survey has found. And he’s positively a pauper compared to Melbourne Herald cadet turned News Corp CEO Robert Thomson.

Deep in News Corp’s full-year financial results, released on Friday, were remuneration details for Thomson and executive chairman Rupert Murdoch. Thomson has a base salary of US$2 million — a figure set to rise to US$6 million when you include a cash bonus and equity-based incentive award. Murdoch stands to take home US$5 million for his News Corp work — on top of US$28.9 million in compensation for running 21st Century Fox (home of News’ former entertainment assets). Murdoch’s base Fox salary of US$8.1 million is the highest in the US media industry.

News Corp did not disclose the salary of Australian boss Julian Clarke, but the pay packets of his CEO comrades suggest it should top $2 million.

The best paid media boss in the country — based on published figures — is Seven West Media CEO Tim Worner. His salary is $2.6 million, a figure that ballooned to $4.17 million over the past financial year through bonuses and other incentives. Seven West Media’s assets include the Seven Network, the Pacific Magazines stable and The West Australian newspaper. Seven West Media’s market capitalisation — the total value of issued shares in the company — is $2.5 billion.

Although Channel Ten is a smaller outfit — and still languishing in the ratings — CEO Hamish McLennan takes home a sizable base salary of $1.98 million. That’s almost half a million more than his predecessor James Warburton.

Not far behind is Fairfax boss Greg Hywood on $1.61 million, which rose to $1.98 million this year when you include share rights. Hywood missed his bonus this year, meaning his salary fell from $2.36 million in 2012. Hywood’s cost-cutting efforts have been praised by media analysts, but the company’s share price remains in the cellar at 53 cents (up from an all-time low of 39 cents last October). 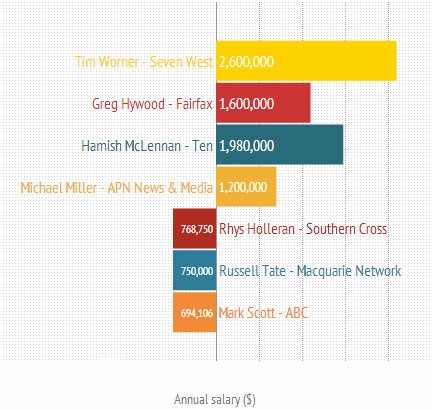 Click through for more graphs and figures on media CEO salaries

Dealing with the fallout from Kyle Sandilands’ antics would not always be a pleasant job, but Southern Cross Media Group CEO Rhys Holleran is well remunerated for his troubles. Compared to his fellow moguls, Holleran’s base salary of $768,750 looks meagre — especially when you remember Southern Cross has a market cap of $1.25 billion (twice as big as Ten and on par with Fairfax). But don’t shed too many tears for Rhys: his total remuneration reached $1.67 million thanks to a $205,000 performance bonus and other extras. Southern Cross owns the Today Network (which includes 2Day FM in Sydney and Fox FM in Melbourne), Triple M and the Southern Cross Ten and Seven regional affiliates.

STW Group CEO Michael Connaghan — who oversees a raft of marketing and PR firms including Ogilvy and JWT — took home a base salary of 805,892 last year. This rose to $1.56 million after a $225,000 bonus and other extras.

The biggest salary drop of the year went to Macquarie Radio Network executive chairman Russell Tate, whose salary plummeted from $1.196 million to $750,000. Macquarie admitted in its latest annual report that it had a disappointing year thanks largely to last year’s social media backlash against 2GB breakfast host Alan Jones. The advertiser exodus last year cost the company between $3-4 million.

That leaves Tate’s pay packet just below that of Mark Scott. The ABC boss took home a total of $773,787 in 2012, according to the ABC’s most recent annual report. Scott’s base salary of $435,597 in 2010 grew to $694,106 in 2012. Unlike his commercial counterparts, of course, Scott does not have to run a profit or convince consumers or advertisers to part with their cash.

Private Media executive chairman Eric Beecher — who publishes websites including Crikey — declined to name his salary. “There’s no need to reference salaries at Private Media in the media rich list because, compared to our esteemed colleagues at the top of the publicly listed media companies, we are not in the same pay league,” he said. “Our fulfillment is not just earned in cash.”

Nine Entertainment CEO David Gyngell‘s salary has previously been estimated at around $1.5 million. We’ll know the exact number next year, after Nine refloats on the Australian Stock Exchange. Given the company’s market cap is estimated at $3 billion, you’d expect Gynge to be mounting a spirited challenge for the mantle of best-paid media CEO in the land.