The Gillard tell-all: for how much? The Herald Sun reported in July that vanquished prime minister Julia Gillard had signed a tell-all book deal with Penguin. Turns out that was true — Penguin Random House has announced today it’s secured the rights for Gillard’s memoir (via its Knopf imprint), with a release date set for October next year. So what will she reveal? There’s a sit-down chat with Random’s Gabrielle Coyne on YouTube, and the press release had her saying:

“I want to distil for readers what I achieved; what drove me, where I erred; my personal resilience and how I coped. I want to share my perspective on the issues of our times and how I strove to make a difference for the better every day I had the privilege of serving as prime minister. I will also write about changing our nation and future challenges in the years ahead.” 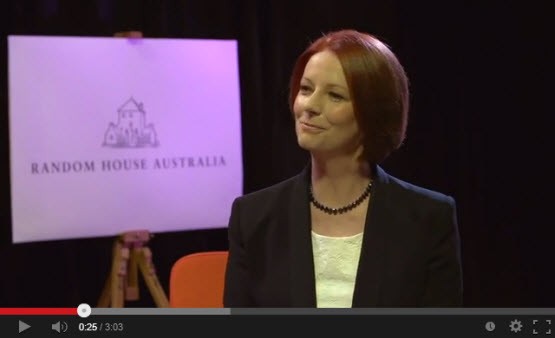 The whispers in publishing circles have already started on just what Gillard will pocket for the writing assignment. Industry insiders told us it could be between $400,000 and $750,000 …

SMH, Age hike paper prices. At Fairfax, The Age and The Sydney Morning Herald are asking readers to prop up falling revenues with another price rise. From Monday, Crikey has confirmed, the price of the metro dailies will rise by 30 cents — meaning your daily paper will now cost $2.30. It’s the first rise since around this time last year, when the cover price was also hiked 30 cents. The newsstand comparison is now even more stark — the higher-circulating News Corporation dailies the Herald Sun and The Daily Telegraph only cost you $1.20 Monday-Friday. Is Fairfax’s content that much better?

Return of the dodo. Words cannot describe the excitement of twitchers upon proof being found and displayed of the existence of the highly reclusive night parrot. John Young snapped some pics of a bird and set the bird-loving world on fire (there’s a lovely pic here). Is the rumour true that a night parrot was actually seen quite recently, before Young’s coup, when a scientist who was camping in the bush went off for a pee and found himself showering a dead night parrot? (Apparently this was not accepted as proof of the bird’s ongoing existence.)

Well, we’ve received a tip-off about a new species being discovered. We’re looking into it and will bring you the story as soon as we can. One clue: it’s not a bird …

Pell fires back at Marr. Shock, horror! Sydney Archbishop George Pell is no fan of David Marr’s Quarterly Essay, “The Prince”, which examines Pell’s power and response to s-xual abuse scandals in the church. Pell declined to speak to Marr for the essay, which is not entirely flattering but far from a hatchet job. In response to a request to appear on air, Pell told ABC Radio National the essay is a “predictable and selective rehash of old material. G.K.Chesterton said: ‘A good novel tells us the truth about its hero; a bad novel tells us the truth about its author.’ Marr has no idea what motivates a believing Christian.”

Re Cardinal Pell; Hardly surprising that someone who believes in gospel truth can’t tell the difference between a novel and a political biography. As an avid reader of Chesterton, I can confirm that his works do indeed tell us a lot about the author. I still find them entraining all the same.

If George Pell didn’t exist atheists would have to invent him.

Re Mr Pells nasty comment on David Marr. May I respectfully suggest that “what motivates a believing Christian” might, in many cases, be little children?