Very few Labor MPs were on the iSentia list of media mentions this week, as the Abbott government proves the power of a majority. 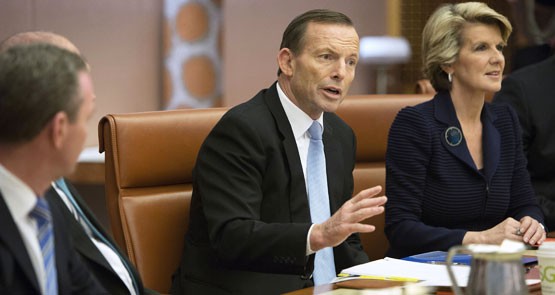 Media coverage numbers for new PM Tony Abbott remain solid this week, yet coverage overall is as about as low as we’ve seen it in the past few years. That probably reflects a combination of post-election political fatigue and the reality of a majority rather than minority government: fewer stories to tell and the government controlling the flow of information. It serves as a reminder that majority governments are pretty powerful because they decide who gets what story when — and the past three years were an exception to that rule.

Which segues nicely to our biggest mover this week in Immigration Minister Scott Morrison, who revealed the government did not plan to publicly reveal when or if any asylum seeker boats were turned around — a key plank of the Coalition’s border protection policy, and an issue we’ll continue to hear plenty about.

Mining magnate Clive Palmer, meanwhile, narrowly won the race for Fairfax, but a recount will ensue. Many hope he keeps his seat if for no more than the “colour” he’ll inject into Parliament and the media. Indeed, pundits predicted voters would reject independents after a hung parliament, but there are more crossbenchers — discounting Peter Slipper or Craig Thomson, who were elected as party people — in the new Parliament than the old one.

Other movers this week include Communications Minister Malcolm Turnbull, who demanded the resignation of the entire NBN board following ballooning costs and further delays in the network rollout. Western Australian Premier Colin Barnett marked his five-year anniversary with a Standard and Poor’s downgrade of his government’s credit rating. His pleas for a greater share of GST revenue reflect declining revenue from mining royalties and problems servicing the infrastructure needs of a growing population. 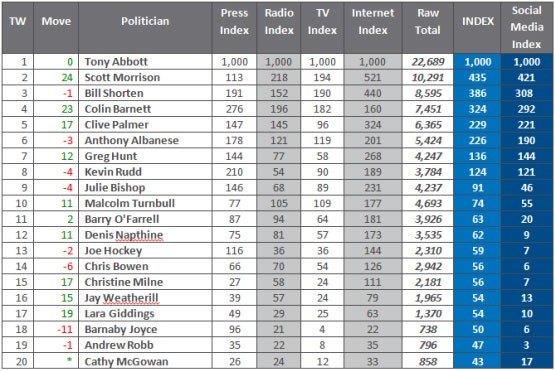 K-Rudd still in the talkback conversation mainly due to the “he saved us 10 seats” polling leak.

The ALP leadership battle that dogged the ALP for the past three years continues in the social media space. But of course this time it’s about renewal.

The Fremantle coach put his team through to its first AFL grand final against Hawthorn this weekend.

I don’t get this article.