Tony Abbott did not secure a landslide victory, writes Australian Catholic University psephologist Malcolm Mackerras. In fact, only one Labor government since the 1950s lost in a landslide. 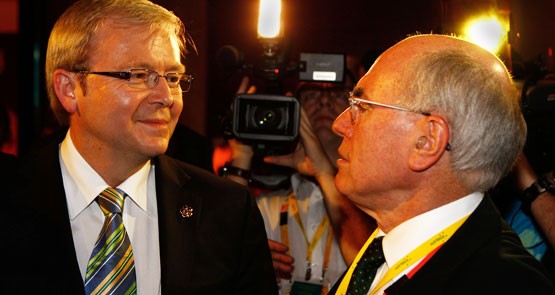 The word “landslide” has been used by some commentators to describe Labor’s loss at the recent federal election. History suggests otherwise.

Was John Howard’s loss in November 2007 a landslide? An academic book to which I contributed on the August 2010 election (Julia 2010: The caretaker election) opened as follows on the first page, written by editors Marian Simms and John Wanna: “Labor emerged from the 2007 federal election with an overwhelming victory in the House of Representatives — commanding a substantial majority of some 16 seats over and above the Coalition plus the two Independents. Labor had captured an additional 23 seats across the land and secured swings towards it across all States …”  If Kevin Rudd gets a 16-seat majority in 2007 and Tony Abbott gets a 30-seat majority in 2013, are both wins landslides?

Since 1950, three federal Labor governments have been defeated (Whitlam, Keating and Rudd), but in my opinion only one of the three could be said to have been defeated in a landslide. That was the Whitlam government in 1975, when Labor could win only 36 seats in a House of Representatives of 127 members, or just 28% of the seats. Labor’s share of the two-party preferred vote was 44.3%, a swing against Labor of 7.4%. That was the only election of recent times when the distribution of the two-party preferred vote was outside the range 55-45.

Congratulations. Probably the most meaningless Crikey article ever.

I don’t know about that, Russell. At least it contradicts the ‘crowing’ of the present useless lot.
The Coalition has only been in govt. for a few weeks, and already they are hopeless. Ideology +++. Never mind what is good for the country!
I hope it only lasts for three years. Otherwise we won’t have a country to save! Landslide in 2016, coming up. (PLEASE?!).

It took a while but Labor were punted and replaced with Liberal. Now Liberal are in plain sight voters can go after them in the same way we went after Labor. Either Liberal start actually engaging with constituents and stop lying to us or expect to be thrown out next election. After all if politicians are not doing the job when in power, why would we keep them in our parliament? we can always find new political candidates to actually do what we want done. It is time to put Liberal National Party under the pump. Edward James