‘The most humble day of my life’: when the Sun King was laid low

Will the fallout from the News of the World phone-hacking scandal bring an end to the Murdoch media dynasty? In his new book, Paul Barry recalls the "must humble day" of Rupert's life. 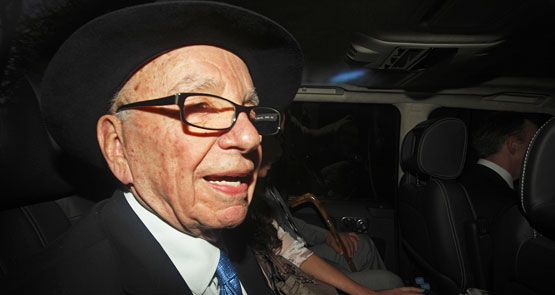 Rupert’s mouth is turned down at the sides, and he is looking depressed. He has every right to be. He is almost totally bald, with spikes of grey hair on the back of his head, and a rash of liver spots up one side of his forehead. One observer will describe him unkindly as a walnut inside a condom.

His youngest son, James, has ushered him into the packed committee room in the House of Commons like the old man he is and shown him to his seat, helped by his young Chinese wife, Wendi Deng, in a pink tailored jacket, who has pulled back Rupert’s chair, as if he can’t find it himself.

The punters have been queuing around the block all morning to secure ringside seats, and millions are watching live on TV around the world. In America, the sharemarket wants to know if Rupert, who is now entering his ninth decade, has still got his marbles. In his native Australia they’ll be staying up past 2am to see how he goes.

It’s not often you get a Murdoch grilled about his newspapers’ abuse of power, let alone two of them at once. In fact, it’s absolutely unprecedented.

It has the air of an impeachment, a moment in history. And it certainly is for Rupert. He’s worked for 58 years to build up News Corp, his US$40 billion media empire, and now it’s all at risk. His greatest wish has been to pass it on to his children, so they can continue his work. And now that’s all at risk too, with James facing imminent disgrace.

So what are his many enemies hoping for from his interrogation? For him to be humiliated, caught, cornered or brought to book? Perhaps even for him to say sorry? If so, they’re not entirely disappointed. As James launches into a long-winded answer to the first of the MPs’ questions, his father puts a hand on his arm to stop him. “I’d just like to say one sentence,” he says earnestly. “This is the most humble day of my life.”

Is it rehearsed? Probably not; one of Rupert’s great attractions is that he rarely thinks hard before opening his mouth. Is it sincere? Up to a point. But “humiliated” would be more accurate. In his entire business career he has never been brought so low; politicians have always come to him, and he has asked the questions.

So why is the world’s most powerful media baron grovelling to these nobodies? Why has he submitted to this public shame? The answer is simple. He’s been ordered to attend: the MPs have served him with a summons, delivered in person by the Deputy Serjeant-at-Arms to his concrete bunker in Wapping. The might of Parliament has been brought to bear.

And days before this — which is why MPs want to interrogate him — he’s been caught red-handed, up to his elbows in shame and scandal. His journalists on News of the World have been found hacking illegally into thousands of intimate, private voicemails of princes, politicians, soapie stars and murder victims, to steal their secrets and turn them into stories. His grubby tabloid paper has been destroying people’s lives to entertain the masses.

Even worse, some of his top lieutenants have been lying about it to Parliament and the public for the last five years, even as News has paid out millions of dollars to hacking victims to buy their silence, claiming the crimes were confined to “one rogue reporter”, and swearing it had never, but never, been part of the paper’s culture. It has been a cover-up of monstrous proportions.

And worst of all, they’ve now been caught in these lies as well.

So does Rupert’s newfound humility mean he’ll take the blame? Well, no. Even though he runs his empire like the family firm, he claims that he’s been betrayed by the people closest to him, that he too is a victim.

“Do you accept that ultimately you’re responsible for this whole fiasco?” he is asked. “No,” he replies. “You’re not responsible? Who is responsible?” “The people I trusted, that I trusted to run it, and then maybe the people they trusted.”

But it is not just that Rupert’s hired help have lied. James Murdoch, who ran the British newspapers, has joined the chorus of denial and authorised pay-offs to keep the story quiet. And even now, in the halls of Britain’s Parliament, he’s telling an untruth, claiming he was never shown the documents that could have warned him hacking at News of the World was happening on an industrial scale.

Rupert, too, has aggressively trumpeted his paper’s innocence, telling the world that all the investigations, inquiries and published evidence were just his enemies out to get him. It was the elites, the toffs, the riff-raff and the failures who resented his success, trying to bring him down. He’s at it again today, blaming jealous rivals for making this into a witch hunt. “They caught us with dirty hands,” he tells MPs, “and they built the hysteria around it.”

People are now asking whether this could be the end of the Murdoch dynasty. Some pundits are saying the old man will be gone within the year and there is now no chance of James taking the throne, or of Rupert passing the crown to his kids. Some are suggesting that James could be charged and that perhaps even Rupert will feel a hand on his collar.

But even if they escape this fate, the Murdochs face a painful future of inquiries, interrogations, revelations, arrests and charges against the people who ran their British newspapers. Then there will be high-profile trials, and the dirty laundry will be washed again. Some of the people that Rupert trusted, like his favourite, Rebekah Brooks, who is almost like his surrogate daughter, may well end up in jail. But one thing’s for sure: the worst is yet to come.

*This is an extract from Breaking News:  S-x, Lies & the Murdoch Succession, published today by Allen & Unwin

Looking forward to reading this.

The rat’s lost his fur?

Does anyone know why he left his wife?

The champagne waits on the ice for the very day. No loss for me.