Markets stay sluggish as the US tries to stable its debt and cash flow problems. 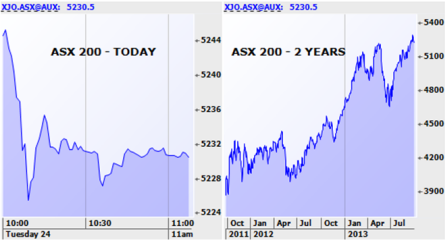 The market is beginning to worry that the lack of tapering last week was a reflection of the Fed’s insight on the economic trend which may have deteriorated more than the market knows.

Debt ceiling negotiations are beginning to move into focus with the starting point being an impasse.

Risk off stocks up — Telecoms and utilities.

Apple up 5% on reports of strong sales for its new products.

Fedspeak — Lockhart says there will not be enough data between now and the next FOMC Meeting (Oct 29-30) to change the Fed’s mind on tapering. Dudley says there is little sign of a pick-up in economic momentum (tapering less likely) and the economic and labor market improvement tests (necessary for tapering) have not been met. Fisher said he voted to taper at the last meeting thinking a no taper decision would create uncertainty about future policy and call into question Fed communication with the market. Two more Fed Governor speeches tonight.

The HSBC Flash Chinese PMI number came in above expectations yesterday at 51.2 — a six month high and up from 50.1 in August and ahead of the consensus 50.9 expected.

Angela Merkel won a landslide election victory at the weekend but her coalition partner the Free Democrats won less than 5% of the vote and cannot enter parliament meaning she needs to find a new coalition partner.

Blackberry up 1%, has been bid for by Canadian private equity (Canada’s “Warren Buffett”) and will be delisted from the NASDAQ.