Essential: Abbott in positive territory; who cares about cabinet women?

Tony Abbott has finally achieved a net approval rating, while men aren't too fussed about the number of women in cabinet, according to new polling from Essential Research. 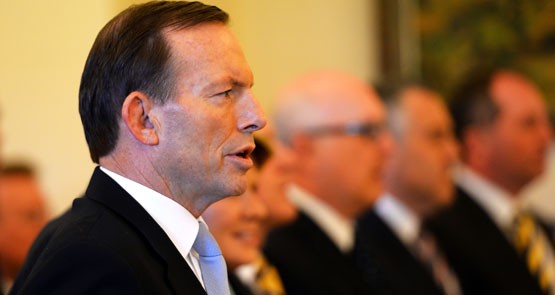 Tony Abbott begins his Prime Ministership with a net approval rating, new polling from Essential Research shows, and he leads both Bill Shorten and Anthony Albanese as preferred prime minister.

Some 41% of voters approve of Abbott’s performance as Prime Minister, compared with 36% who disapprove. His last figures as opposition leader, at the start of the month, were 40%-49%. He has also bettered former prime minister Kevin Rudd’s last approval figures of 42%-47%. However, he still has a narrow net disapproval among women, 38%-39%.

Abbott also leads both Shorten and Albanese as preferred prime minister, with the results suggesting voters don’t differentiate much between the candidates. Abbott leads Shorten 37%-32% and Albanese 37%-31%.

There’s also a big gender gap over the dearth of women in Abbott’s cabinet. Only 39% of men expressed concern about the fact that only one woman is in cabinet, while 57% had no concerns about it. This compares with 51% of women were concerned and 42% who weren’t concerned. Voters under 35 were also more concerned, 52%-41%, with 17% of Liberal voters reporting they were concerned, 67% of Labor voters and 90% of Greens voters.

While voters are relaxed about one in 19 cabinet ministers being female, they’re very uncomfortable with foreign investment in agriculture. Only 22% agree that foreign investment in agriculture is good for the Australian economy, while 55% disagree, including 30% who strongly disagree. And while Coalition voters, older voters and low-income voters are more likely to disagree, the feeling is fairly universal: only 23% of Labor voters agree, 25% of Coalition voters agree and 14% of Greens voters agree.

Essential this week also asked about trust in the use of personal information by institutions. Only the medical profession and law enforcement agencies were trusted to use personal information responsibly. Other institutions that fared reasonably well were employers, banks and bricks-and-mortar retailers. The two least-trusted institutions were social media sites — Australians seem to have absorbed the lesson that platforms like Facebook are vast privacy-destruction machines — and television networks, which only 20% of voters thought they could trust. 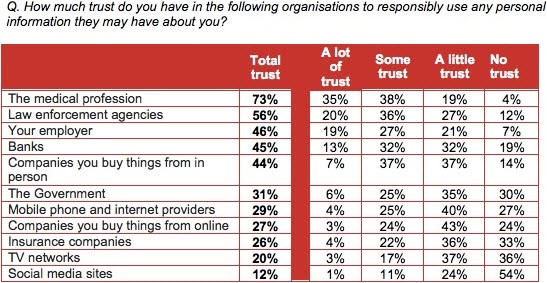 That result gives the lie to claims by Free TV that privacy is a non-issue for Australians when it comes to the behaviour of television networks. Free TV representatives advanced that argument at an Australian Communications and Media Authority privacy forum earlier this year, insisting viewers had no concerns about the way TV networks handled privacy.

That’s a big shift for the rAbbott and his motley crew!
At the election 2PP = 53/47, and now 51/49, to the Coalition.
Not all sweetness and light, it would seem. Looks like a few people are having second thoughts. Bit late now!!

with any luck this is a sign that people will start taking the triennial punters cup a little more seriously.

Only 39% of men expressed concern about the fact that only one woman is in cabinet, while 57% had no concerns about it. This compares with 51% of women ”

39% of men are concerned and 51% of women are also… I wouldn’t call this nothing to worry about…. This after only one week into a new government .. I’d call that a warning bell

I’m not too fussed about the number of women as such because I cant see how putting the kind of woman who would make it to the Liberal front bench would, of itself, increase diversity of opinion. Really, you went to the sister school of our school and, oh wait, you’re a lawyer and have ties to big business? Wow, we really need you to balance things out.