Markets stayed sluggish worldwide as budget uncertainty continues in the US. 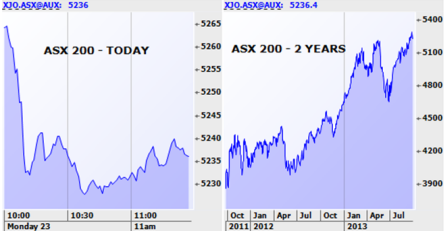 The market is down 40 points. Dow down 185 as St Louis Federal Reserve president James Bullard said the Fed could start to taper at the next FOMC on October 29-30 but also said they needed to be patient with inflation as low as it is. Another Fed Governor, George, said the Fed lost some credibility by not tapering.  Concerns that a protracted debt ceiling negotiation is ahead was highlighted by a Congress vote along party lines to fund the government if Obamacare is ‘defunded’. It is unlikely to pass in the Senate but highlights the budget impasse.

The Dow Jones finished down 185. It was up 17 at best and down 189 at worst. Triple witching meant high volumes on the day.

The Bank of India surprised markets by raising rates by 25 basis points suggesting other emerging markets may follow the same path.

Blackberry fell 17% after cutting second quarter guidance and announcing a 40% cut in its workforce.

US Economics on Friday: None of note.