News Corp columnist Piers Akerman caught the attention of political junkies across the country on Sunday morning by airing explosive claims on Insiders ... 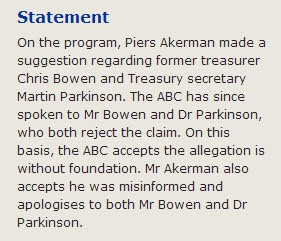 This is the second time in two consecutive Insiders appearances that Akerman has had to apologise. Host Barrie Cassidy called Akerman” pathetic” during his last appearance in June for suggesting rumours about the sexuality of Tim Mathieson had been circulating in the Canberra press gallery for years. At the end of the show Akerman said: “If the Prime Minister is watching, as she usually does, I hope she hasn’t taken any offence at anything I’ve said this morning.” Insiders fans will be eagerly awaiting Akerman’s next appearance — if, indeed, there is one — to see if he can score a hat-trick. — Matthew Knott

The Oz‘s PANPA fury. What a difference a year makes. Last September, The Australian was trumpeting being named newspaper of the year by the Pacific Area Newspaper Publishers Association (PANPA). The Oz was so proud of the gong it put it in the paper’s masthead.

Today The Oz‘s media section publishes a 1900-word piece attacking the PANPA awards. The crime? Handing this year’s newspaper of the year award to rival publication The Age. The Oz‘s report contains claims the PANPAs are biased towards Fairfax, the judging process lacks transparency, overseas judges should not be included and that newspapers with falling circulations should not be eligible for the awards.

The piece, by media diarist Nick Leys, has certainly touched a nerve at Fairfax. Director of news media Garry Linnell told Crikey: “I think most journalists in Australia would have flinched with embarrassment when they saw that tantrum. Best to do what most of us do when we see a child in public screaming and crying when they don’t get what they want. Look the other way — and privately ponder the shortcomings of their upbringing.”

The Age’s editor-in-chief Andrew Holden said: “The Oz won last year, and no one in Fairfax said a word, but now they question the system which just demonstrates arrant hypocrisy … It really is fantastic. The Oz runs 1900 words on The Age winning newspaper of the year and poor Nick doesn’t even bother to contact the editor of the paper that is being bagged?”

Holden says The Age‘s entry highlighted its coverage of the Jill Meagher murder, its Damien Oliver betting scandal scoop and its revelations about Essendon coach James Hird injecting himself with a tanning and libido drug. He denies the paper should have missed out because of its digital-first strategy and 16% circulation decline over the past year. Holden went on:

“Yes we are driving our digital coverage, which is why we have almost twice the number of daily readers as the Herald Sun (which must have been thoroughly embarrassed not to even make the finals when mX did). The problem for News is that, despite being so print focused, they just aren’t producing great papers any more. Of course our circ is dropping, that’s a deliberate strategy, so what’s their excuse? … We’ll just keep on doing the same quality journalism. Boring, really. And I just look forward to The Oz‘s Mad Monday every week.” — Matthew Knott

Experts blast News fear-mongering. Child abuse experts have rubbished Australia’s most-read website, news.com.au, for running a story advising readers how to spot a paedophile. They say the checklist was inaccurate, irresponsible stereotyping. The article, published last week, warns the reader of nine different “types” of child molesters and the behaviours they supposedly exhibit. These behaviours are as varied as being a teacher, dating a single mother or being overly eager to babysit.

“Paedophiles are often the victims of child molestation themselves. If you know this about a person’s past, beware. It’s all very well to feel sorry for a person, but don’t let them anywhere near young people you know.”

That passage has now been removed, with no acknowledgement from the site. University of Western Sydney professor of criminology Michael Salter told Crikey the article was irresponsible on several grounds. “It’s really sad that the level of public discussion around child abuse has been brought back down to stereotypes,” Salter said. “Sex offenders are a heterogeneous group – they have almost nothing in common.”

Salter pointed out that almost every male is, in one way or the other, covered by the list as a person to look upon with suspicion, and that stigmatising large groups of men – who are overwhelmingly not paedophiles – is not promoting the right message to anyone.  — Crikey intern Angelo Risso (read the full story here)

The budget spending we’re not allowed to know about

I took one look at the panel of Insiders, saw Ackerman was there and switched off the TV. The man is toxic which mirrors the company he keeps. Truth is not one of his guiding principles.

Age unique audience 1,938,000 Herald Sun unique audience 1,716,000 ….better but hardly double Mathew …might good to check your source as well ocasionally instead for blindly allowing anything anti-News to be repeated as a fact

That’s 44% in front, which is almost half in anyone’s book.

Why do they keep showering their audience with the jabbering Piers “Trough” Akerman?

ABC’s idea of a “suggestion”? Wasn’t it an assertion?

How do they pay for sensationalist vacuous biased bull-shit – “by credit card”?
What’s the dwindling interest on that, when you get so far behind?