Albo and McGowan party on in Melbourne (separately) ... it's pens at 30 paces in Brisbane ... guess who's coming to dinner ...

Albo campaign heads south … The rolling Anthony Albanese roadshow hit Melbourne last night, with the third campaign launch in three days  — this time at the Tuscan Rooftop Bar in Bourke Street. By 6pm, the joint was rocking with more than 300 people jammed in. However there was initial confusion for many on the stairway, when the first sign seen was “Green MP”. Say what? Turns out Right-aligned Labor state member for Yan Yean Danielle Green was having birthday drinks in the bar below — Green will be voting for Bill Shorten.

Notable attendees included former deputy PM Brian Howe, Race Mathews and novelist Helen Garner floating between the two events. One prominent representative of the Right present was Frank McGuire (Eddie can’t be Everywhere). “This mob are absolutely defeatable in three years” his Alboness intoned. “I mean look at their first week!” The  applause and shouts of “Albo!” could be heard from several blocks away, and were particularly welcome to the ALP Cath Bowtell campaign team, there en masse, who looked like they could do with a bit of cheering — and not so many “Green MP” signs.

… while Indi party rocks on. Meanwhile up at Fitzroy’s Standard Hotel, one-time bolthole of Melbourne’s Maoists and now beer garden of choice for the Fitzroy mafia — unlike Carlton’s, they deal exclusively in wounding book and theatre reviews — the Cathy McGowan Indi team were having their Melbourne knees-up, with the core team from the Voice of Indi group meeting up with their country cousins. Quite literally — three of McGowan’s core team are cousins of Cathy.

A larger event is planned tonight in Wangaratta, now set to become the new epicentre of a grassroots rural political revolution. There was by common consent an upbeat atmos, and no hating on the defeated Sophie Mirabella, now vanishing into history — and even a kind memory of her from one attendee, when Miraebella was part of a group celebrating a Left-Right unified political victory 20 years ago at the now-vanished Albion Hotel in Carlton. The then Miss Panopolous, beer in hand, apparently reflected that “politics was the best orgasm there was”. Quite possibly the Standard crowd would drink to that

Poets at war on Brisbane circuit. Brisbane Writers Festival poet and committee member Graham Nunn has recently been accused of plagiarism and intellectual theft. But there are even more sordid matters afoot with the festival, it seems. Former State Library of Queensland poet-in-residence Mandy Beaumont has accused BWF organisers of of stealing the name and venue of her successful poetry reading event, titled “Spoken”. Attracting “up to 300 people”, Beaumont’s then-monthly poetry gathering was attended by current BWF director Kate Eltham as well as Nunn. Beaumont accuses the festival committee of taking the event’s premises, name and venue without any credit, recognition or payment.

“She [Eltham] came to one of my gigs, Graham Nunn was doing blogs about my gigs as well. The Queensland Writers Centre even promoted it for me. Couple months later, I noticed that as a part of the Brisbane Writers Festival there was a poetry reading segment called ‘Spoken’ and at the same venue,” Beaumont said.

In response Beaumont wrote an email to BWF chair David Fishel asking that the name of the event be changed and an apology issued. Fisher passed Beaumont’s complaint on to Eltham, and Beaumont says she was “shrugged off”. Eltham (who is on leave and unavailable to speak to Crikey) wrote to Beaumont: “The word ‘spoken’ is exceedingly common in names and titles for a variety of literary programming around the world, but especially readings, so we weren’t thinking particularly of your program when we selected it.” But Beaumont says the plagiarism of her event is clear. “Same people, same spot, your people came to it, like, come on,” she said.

Fishel told Crikey in a written statement: “The name was chosen because it describes the content contained in this stream of festival programming, which is primarily readings and book launches from local writers’ groups. In fact the word ‘spoken’ is common in names and titles for a variety of literary programming around the world, but especially readings. However, we regret that this has caused Mandy concern and had already expressed an apology.”

Beaumont’s accusations follow claims made by British poet Ira Lightman that Nunn’s poem Fortune was suspiciously similar to Candian poet Don McKay’s Philosopher’s Stone, among other instances of plagiarism. Nunn, who is the partner of BWF program manager Julie Beveridge, admitted other poems were “creatively appropriated” for use in his own work but denies allegations of direct plagiarism.

Freedom for miners. The Sydney Mining Club has sent its members an email spruiking an upcoming “freedom of speech” event hosted by the right-wing thinktank the Institute of Public Affairs. The IPA has kindly provided the miners with free tickets. Crikey also wants to attend the event, but we will have to stump up the cash ourselves …

Leader loses it. What is going on with Melbourne’s News Corporation-owned stable of suburban newspapers? At least five of the Leader papers last week have carried a blank page with the words “Content has been suppressed for editorial and/or legal reasons”. For example, check out the yawning white space on page six of last week’s Hume Leader, which is particularly embarrassing given the paper’s “new look” … 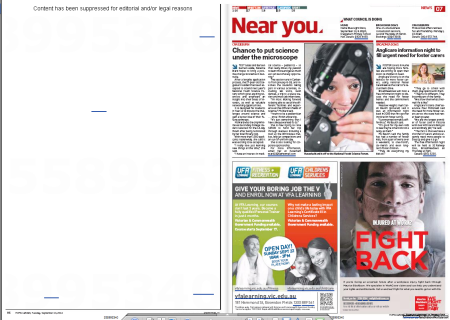 We put it to News Corp, and a spokesman explained: “The issue was caused by a grocery advertiser pulling a full-page ad at the last minute, as the content contained an incorrect price. We were unable to amend the print editions in time, but were able to remove the ad in our digital editions.”