Changes in consumer spending are going to go on clobbering the traditional retail business model, regardless of what the Aussie dollar does. 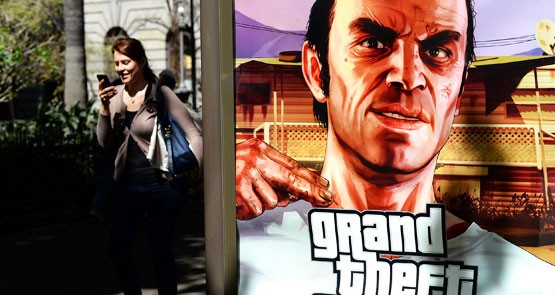 By the close of business today, thousands of people will have queued around 20 big, flashy Apple shops across the country and smaller telco outlets like Telstra’s shops to look at and then buy a new Apple iPhone 5. The hundreds of thousands of dollars they will spend today and into the following weeks will be money that won’t be spent in other retail outlets or activities.

And earlier this week, as many of us with teenagers will know, Grand Theft Auto V came out. It sold a record $US800 million worth in the first 24 hours in the US and Europe. Yes, $800 million! That’s more than all but the biggest Hollywood blockbuster movies make. Oh and by the way, new gaming consoles are coming from Microsoft and Sony later in the year. They’ll be accompanied by a new Call of Duty title. Expect similar numbers to GTA V — except the main interest in CoD titles is online multiplayer gaming, for which you need not only a quality broadband connection but also an Xbox or PlayStation subscription. In the June quarter, Microsoft earned US$1.7 billion from Xbox Live points.

And by the close of business today, millions of dollars will have flown into the bank accounts of Westpac, CBA and their peers from millions of mortgage owners who are repaying their home loans faster than they have to. That’s part of the continuing deleveraging trend as bank deposits soar while consumers and especially home owners save, save, save, instead of spend, spend, spend, which in turn has confused retailers and others in government.

These are all reasons why big retailers — Solly Lew and the hands-on Mark McInnes at Premier Investment, Bernie Brookes at Myer, Gerry Harvey and so on — will continue to whinge about how tough they’re doing it. Retail in Australia is changing, and the change is clobbering their business models. And the change isn’t just the switch to online purchasing, GST-exempt services and food, as we’ve so often explained.

The spending on smartphones, not to mention the apps that you can buy for them (worth US$26.7 billion in revenue this year), diverts revenue from existing shops and services into fast-growing areas of consumption dominated not by traditional retailers but by emerging retailers like Apple and telcos. Although iPods and mobile phones have been around for a decade or more, it’s only with the advent of the iPhone (and smartphones generally) and tablets that the sector has grown enormously. Moreover, it’s telcos that manage the accounts of smartphone owners, which sucks  billions of dollars more out of the domestic economy that a decade ago would have been available to be spent on consumable items and services.

Solomon Lew has locked himself out of this trend completely, preferring to concentrate on stay in clothing and apparel. That has hurt his group’s sales and profits, but Lew refuses to acknowledge that, preferring to blame online GST-free purchases from offshore, or bad management by the former ALP federal government.

Meantime, other new product categories have emerged that also have a significant diversionary effect. Gaming has long been dismissed as trivial and juvenile, but the numbers show it is a major entertainment product with, as the Xbox Live revenue shows, an ongoing revenue stream even between major event titles like GTA and CoD. Those titles do need to be physically purchased at an outlet, whether it’s a games store (a retail form that is going the way of the video store) or more likely an outlet like JB Hi-Fi. A rapidly growing segment of gaming is entirely online, purchased via outlets like Steam, despite the blatant gouging of Australians customers that game manufacturers engage in.

A key feature of these new categories is that they are based offshore. We don’t make or design smartphones here, and we don’t produce blockbuster video games, or game consoles. In fact, we don’t produce many entrepreneurs who have the smarts to develop new product categories at all. That means that the stronger the currency, the bigger the impact on traditional retail of these new categories. And right now, with the dollar regaining some of the recent and welcome fall in value, that means things will continue to worsen for retailers.

At least buying a game or an iPhone in Australia will generate GST revenue, if not enough for WA Premier Colin Barnett’s liking (Prime Minister Tony Abbott this morning again ruled out altering the GST despite Barnett’s plea yesterday). But mortgage prepayments and rising bank deposits (up $125 billion in the year to June) means more diversion: money is being saved and not spent on products and services that attract GST. Some of us remember the 1980s when Australians were continually lectured to save more, or even the early part of last decade when our very low savings rate was said to be a cause of concern. Now the government hopes to knock our prudence and caution out of us so we spend more.

Yesterday, the RBA provided more evidence of the impact of this faster pace of repayments, with a research paper revealing that between 50 and 90% of the 2.25 percentage points of rate cuts since late 2011 have been used for faster than normal mortgage payments. The RBA says this has cut credit growth for home lending by around 0.8% (which is equal to two months of nominal growth at the moment.

Credit growth in the year to July was 4.6%, up from 4.4% a couple of months ago. The 0.8% impact from the prepayments would have pushed growth to around 5.5%. The RBA researchers say that assuming no more changes interest rates, the impact of the high level of prepayments on credit growth will peak at 1% in 2014.

Traditional retailers might be better off thinking about why they’ve been left behind by consumption and savings trends, rather than begging for assistance. There’s — for once — a very good editorial in the Australian Financial Review today suggesting that the best response to a strong currency isn’t to try to prop up industries like car manufacturing. “Australian business cannot depend on the Reserve Bank to dull the pain of a high dollar by cutting interest rates lower and lower,” the Fin concluded. Absolutely. And that applies as much to retailers as to manufacturers — or state governments such as Western Australia, which wants the rest of Australia to bail it out via a higher GST.

Is anyone out there recommending that we lower commercial lease rates?

Gerry Harvey is a landlord, not a retailer.

The GST comment at the end is a bit wrong, don’t you think?

WA contributes much more to Canberra in GST than what it receives back. How can you possibly claim that it would be the rest of Australia bailing WA out when the reverse is clearly the case?

Don’t take this as a comment on the fairness (or otherwise) of GST distribution, just a scratching-of-the-head at your comment.

And some of us have realised we don’t need lots of stuff. Simple.

It should be remembered that Bernard is part of that Eastern Seaboard cliche AKA “south sea poms” that think the sun shine out their p*sterior.